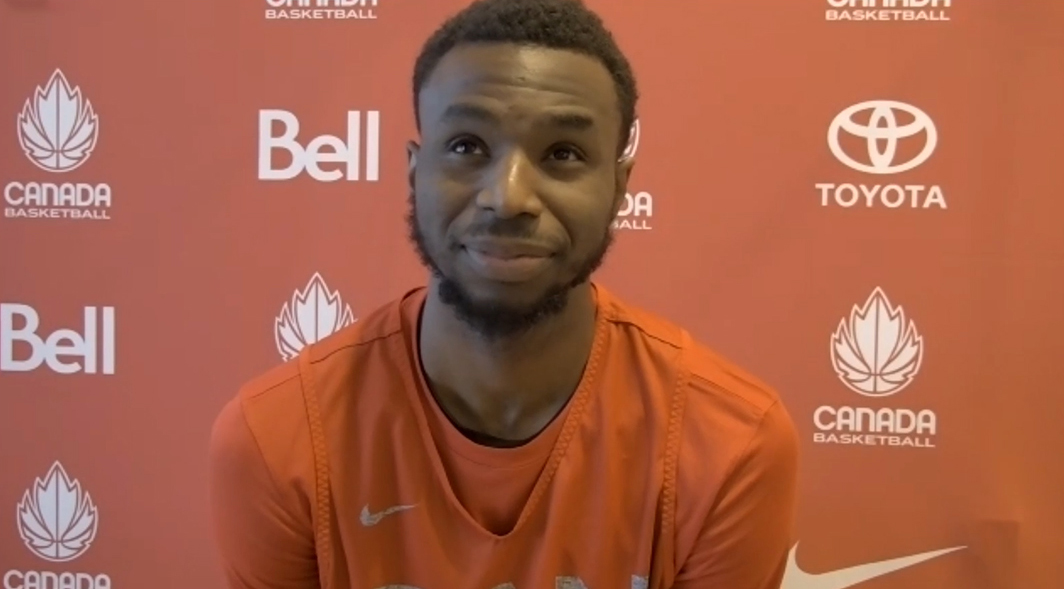 On Wednesday morning, Andrew Wiggins sat down with the media as a member of the Canadian senior men’s national team for the first time in a long time. For many, Wiggins was the spark that ignited a generation of Canadian basketball Olympic dreams. Dubbed Maple Jordan in high school, Wiggins was thought to be the successor to Steve Nash’s throne in Canadian basketball lore and take the men’s national team back to the Olympics for the first time since 2000.

But the last time we saw Wiggins in a Canadian uniform, before today, was six years ago in the 2015 FIBA Americas Championship where a young Canadian team led by head coach Jay Triano lost in the semi-finals to a Venezuela squad on a last-minute foul in one of the most painful moments in Canadian national team history leading to a third-place finish–just one game shy of qualifying for the Olympics.

“I think about it sometimes, but it was a long time ago,” said Wiggins of the loss to Venezuela. “I’m looking forward to this time around. I feel like our team is even better now. A lot of good talent, some of the guys are older, so experience is there, and we’ve got a lot of great, good young guys. It should be a good one.”

The return of Canada’s prodigal son was something not many could have predicted. Throughout the last five years rumours swirled about Wiggins’ absence from the national team and they seemed to grow wilder with each event missed but his return couldn’t be timed any better. While Wiggins declined to play in the last-chance Olympic Qualifying Tournament in 2016 and the 2019 FIBA World Cup that had an Olympic berth for the top two finishing teams from the Americas, he’s returning to a team with the most talent in Canadian men’s national team history.

Joining Wiggins are a few familiar faces from the 2015 FIBA Americas Championship. Cory Joseph, Dwight Powell, Andrew Nicholson, Melvin Ejim, Aaron Doornekamp and fellow first overall pick Anthony Bennett are all returning to the fold but the young stars on the team are what has stood out to Wiggins the most so far.

Headlining that young crop of Canadian talent is 21-year-old New York Knicks guard/forward RJ Barrett and head coach Nick Nurse has made it a point to keep them on the same side of the scrimmage throughout the first few weeks of training camp to develop chemistry between them.

“It looks good, it’s interesting it’s kind of like you can mirror everything with those guys,” said Nurse of his wing duo. “They’re similar they can both catch and shoot it, they both can turn the corner and drive it, they both can post it a little, so there’s a lot of mirroring you can do and so far their chemistry has been great.”

Wiggins is bringing his improvement and maturity to the team as well. After five and a half seasons with the Minnesota Timberwolves, Wiggins was traded to the Golden State Warriors for D’Angelo Russell, a second-round draft pick, and the pick that eventually became the seventh overall pick in the upcoming 2021 NBA Draft. As a member of the Warriors, Wiggins improved his field goal and three-point percentages to career bests and he credits being around Warriors head coach Steve Kerr, Most Valuable Player finalist Steph Curry and Defensive Player of the Year candidate Draymond Green for the last year for putting him in the mindset to lead this team to a spot at the Olympics.

“It taught me a lot about winning, about sacrificing, everything. Hopefully I can take back what I learned there and bring it here,” said Wiggins.

Team Canada will get their first chance to play against someone other than themselves when they run a scrimmage against the Canadian U19 team on Wednesday in what Nurse described as a “program builder” and will give the senior team a chance to run their sets against an opponent who doesn’t know their playbook before heading to British Columbia on Thursday with a 14 man roster that they’ll need to cut down to 12 from there.