Ball movement, selfless basketball and a whole lot of Brady Heslip fueled Canada past the Dominican Republic in a 105-88 win on Tuesday evening in the Canadian Men’s Pan Am opener at the Mattamy Athletic Centre, formerly known as Maple Leaf Gardens.

Behind a phenomenal shooting display by the Baylor alum (Heslip), who poured in 24 points including 5/10 from three-point territory, the Canadians breezed by a frustrated Dominican Republic club to go 1-0 in the Pan Am preliminary round.

“It was great, it was a lot of fun playing back in Toronto again,” said Heslip after lighting up the Dominican Republic’s perimeter defense all night. “We were all pretty excited and we’re just glad that we could get the nerves out and still get the ‘W’ tonight.”

Canada shot a blistering 55% from the field, and while they held the Dominican Republic to just 42% shooting, Coach Jay Triano realizes that the defense needs to be better, especially when they play the likes of Mexico.

“If we can be better defensively, I think our offense will be better than that,” said Triano after the win. “That first quarter we gave up too many offensive rebounds, we didn’t get stops the way we were supposed to. That took away our running.”

“Our defense is going to have to be a lot better, and if it is, offense will flow. We’ve got enough athletes, so that open floor is going to be good for us. We scored the ball tonight, I don’t think we defended very well,” said Triano.

Orlando Magic forward Andrew Nicholson did his duty against a smaller Dominican Republic frontline as he chipped in with 14 points & 5 rebounds, while fellow NBA’er, the Minnesota Timberwolves Anthony Bennett, had a pleasant homecoming with 15 points of his own to complement a 10-rebound night for the double-double. Former Iowa State standout Melvin Ejim contributed 12 points in the win.

Jamal Murray, the team’s youngest player at 18 years of age, scored 12 points in this contest. He talked about the nerves going into this game.

“I think everybody has jitters going into anything, especially in the Pan Am Games, in something as big as this, with your country representing you, looking at you. A little nerves, but after you run up and down the court once or twice it’s fine.

Steve Nash was also in the building to support his fellow Canadians.

“We got a much needed victory in the first game. It’s obviously a new environment for our guys,” said Nash. “Very rare that Canadians get to play in a meaningful game in their own country. I think it was good to get the first one out of the way.”

Nash also understands that there is still a long way to go before Canada reaches its peak in the Pan Am games, especially on the defensive end.

“We were poor defensively. That wasn’t the standard, that wasn’t what we expected. A lot of breakdowns, let’s hope that we got that out of our system.”

The former two-time MVP was also quick to give credence to the up and coming Murray (Committed to the University of Kentucky), praising his feel for the game.

“I’ve watched him quite a bit. He’s got a tremendous amount of ability. He’s got a very bright future, so it’s really exciting for our program. It’s also exciting for me as a point guard to see a young player coming through with that much ability, it was very fun and exciting.”

Sim Bhullar had 2 blocks for Canada

Every player scored for Canada 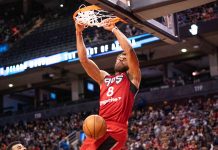 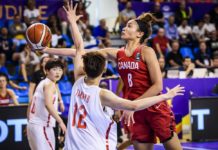