(Toronto, Ont.) – Canada’s Cadette Women’s National Team established a pattern of bouncing back from losses, winning a crucial match against Brazil at the FIBA World Championship for Women, in the Czech Republic.

Bridget Carleton (Chatham, Ont.) led Canada in the Round of 16 victory, having another game filled with notable numbers. Her scoring (19 points on 5-7 shooting, including 3-4 from three) was tops between the two teams. Carleton also finished with six rebounds, three steals and two assists.

“I think we made adjustments at half. The first half was close. We didn’t handle it very well. We weren’t attacking. We made adjustments at half to get good positioning and that helped us limit the turnovers in the full court. In the half court we had good ball pressure and we really started to handle it well. Our timing and flow got better to our offense so that really helped us with the win,” Carleton said of the win.

“I am excited to get to the quarterfinals. We definitely proved we can play well and we can win. It’s definitely exciting to be top 8 and we’re just going to go from here and see what happens.”

It was a physical contest from both teams, causing Canada to focus on execution.

“We had to stay in stance today and dribble with purpose, and pivot and stay strong with the ball and then eventually we figured it out,” said head coach Carly Clarke.

“We had to step to the ball, we had to play with some composure. We talked about them playing fast and Brazil actually got us to play too fast at times so when we were able to maintain the speed that we wanted I think good things happened.” 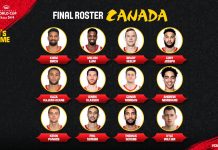