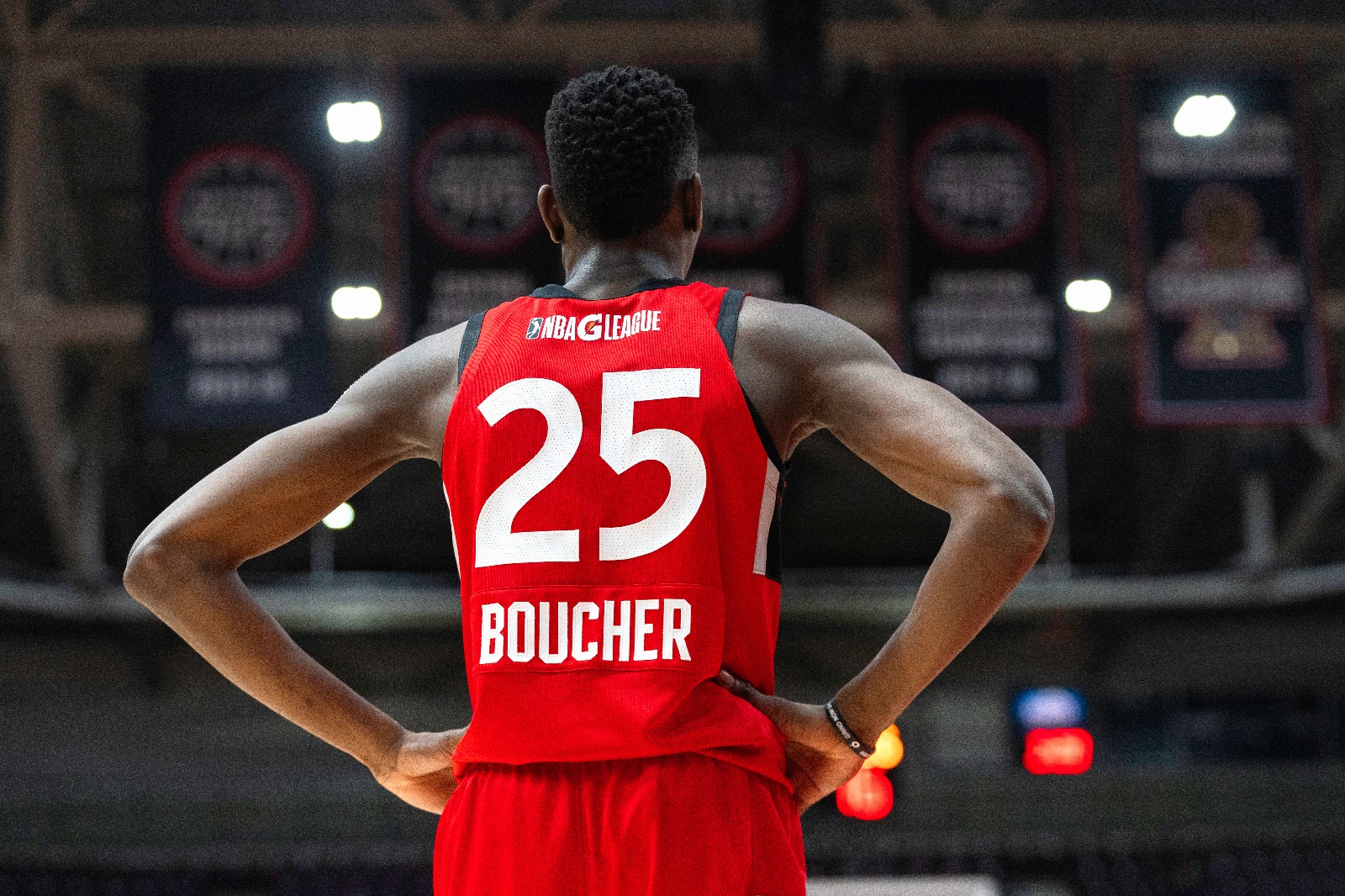 By Connor LamontMarch 26, 2021No Comments

The NBA G League has become a popular stop for future NBA players.

Originally called the NBA D-League, it was renamed for the 2017-18 season and has continued to develop high-calibre players who have gone on to find success in the NBA. NBA teams have begun to recognize the benefits of the league, which has seen its number of franchises more than triple to 28 since it began play in 2001. Notable players who got their start in the minor league include Danny Green, Hassan Whiteside, JJ Barea and Toronto Raptors stars Fred Vanvleet and Pascal Siakam.

In addition to the wealth of talent in the NBA who came from the G League, Canadian players have also been taking advantage of the developmental league. In the 2021 G League season alone, there were nine Canadians taking part, and some of those players are in the NBA right now. Canada has the most representation in the NBA from any international country and many of those names were able to cut their teeth in the G League.

So today, we are going to take a look at some of the top performing Canadians in the 2020-21 NBA season whose careers were springboarded by the league. For this particular list, the selected players joined the league, or spent most of their time in the league, after it was changed from the D-League, to the G League in 2017.

Toronto Raptors fans are now very familiar with what Boucher is capable of doing. The big man has defied the odds multiple times during his journey to the NBA.  Boucher tore his ACL in his final year of college and went undrafted. He spent time with the Santa Cruz Warriors of the G League in the 2017-18 season before joining the Raptors 905 for the 2018 season.

In 28 games with the 905, Boucher averaged 27 points, 4 blocks and over 11 rebounds per game. Boucher did it all for the 905 and he was rewarded with the G League MVP award and defensive player of the year award (the first player to win both in a season). He was on the roster for the Toronto Raptors 2019 championship season.

Boucher continued to develop his scoring and defence and the organization signed him to a two- year $13.5 million contract in November of 2020. It is the largest contract for an undrafted Canadian at this point. Along with the contract, Boucher was also given the opportunity to play bigger minutes from the beginning of this season since the team’s two centres, Marc Gasol and Serge Ibacka, left for other teams in free agency. Despite the Raptors current slide and lacklustre season, Boucher has been a bright spot and has a ton of potential.

Luguentz Dort is a perfect example of what the G League can do for hopeful NBA players. After going undrafted in 2019, Dort was given an opportunity by the Oklahoma City Blue to prove wrong the 30 NBA teams that didn’t draft him. In 13 games with the team, he averaged 19.5 points and 4.8 rebounds to leave the organization with no other choice but to call him up to the Oklahoma City Thunder.

The 6’4 two-way player grabbed a starting role after eight NBA games and did not look back. He is commonly tasked with guarding the top scorers in the league and has shown that he can score at a high rate. His efforts were rewarded last June with a 4 year $5.4 million contract. Perhaps his most remarkable performance was in a game 7 loss to the Houston Rockets in the 2020 NBA bubble playoffs. Dort’s defence limited James Harden to just 17 points while on the other end he scored 30 points in the game, the most by an undrafted rookie in league history.

This season, Dort is putting up 12.5 points per game along with 4.8 rebounds. He gained significant attention for a three-point buzzer beater against the San Antonio Spurs in a thrilling win in February. He is a consistent and reliable player for the Thunder and should continue to grow during the rest of the season.

Birch has never been shy to state that his G League experience with the Lakeland Magic in 2017 was crucial to his positive career trajectory. The undrafted centre spent time with the Sioux Falls Skyforce of the G League in 2014 before going overseas to Turkey and Greece for a few seasons. He signed with the Orlando Magic, but spent most of his time in Lakeland developing his play. In 21 games as a starter, Birch scored 14 points per game and 9.6 rebounds. He was able to experiment with his game and only ever saw his time with Lakeland as an opportunity to grow.

Birch was eventually called up to the team in January 2018 and has not looked back since. Birch is loved by his teammates and has earned the reputation as an extremely hard worker from his coaches. This season, he is averaging 5.5 points and 5.3 rebounds per game as the backup centre for Orlando and many believe he might be the best backup centre in the NBA. In addition to his high basketball IQ and strong defence, he is one of the best screen setters in the NBA. The 12 points and 12 rebounds he put up against Boston in January demonstrate his scoring potential and why Orlando is so high on his upside. He is also rumoured to be developing his three point shot, in order to be more of a threat on offence.

The guard was drafted by the Windy City Bulls in the 2017 G League draft and played with the Chicago Bulls affiliate for two seasons. Mulder began the 2019 season with the Sioux Falls Skyforce and played in 39 games. His strong play resulted in a 10-day contract with  the Golden State Warriors in February 2020.

Mulder made an immediate impression with his new team scoring 17 points in just his third game. In the final game of his 10-day, he started and put up a new career-high of 18 points. He averaged over 12 points during his stint with the team and signed a multi-year extension after his 10-day contract ended. Warriors’ coach, Steve Kerr, considered Mulder an asset and hard worker and wanted to see him play more games with the team.

This season, Mulder has reached double digits in points 5 times and is making every case he should be a part of the Warriors long term plans. He entered the season on a non- guaranteed contract, but his 4 points per game and almost 40% shooting from three will guarantee his $1.5 million contract. Mulder is trending in the right direction and could become an important player as Golden State looks to rediscover its championship success from a few years ago.

Kabengele is a player Canadian basketball fans should keep an eye on this season and in the future. The 2019 first round played 12 games with the Los Angeles Clippers during the 2019-20 season but spent the bulk of the year in the G League. In 27 games as a starter with the Agua Caliente Clippers, Kabengele averaged almost 19 points per game and found considerable success with the team. Kabengele started the season with the Clippers, but was traded to the Sacramento Kings on March 22nd. With more NBA experience, the Canadian could grow into a great player for the Kings.

Clearly, many Canadians who started in the G League develop the necessary skills to excel in the world’s top basketball league. Opportunities with NBA teams are tough to find, but the Canadians on this list seized their moment and all credit their G League experience as being vital to their success.