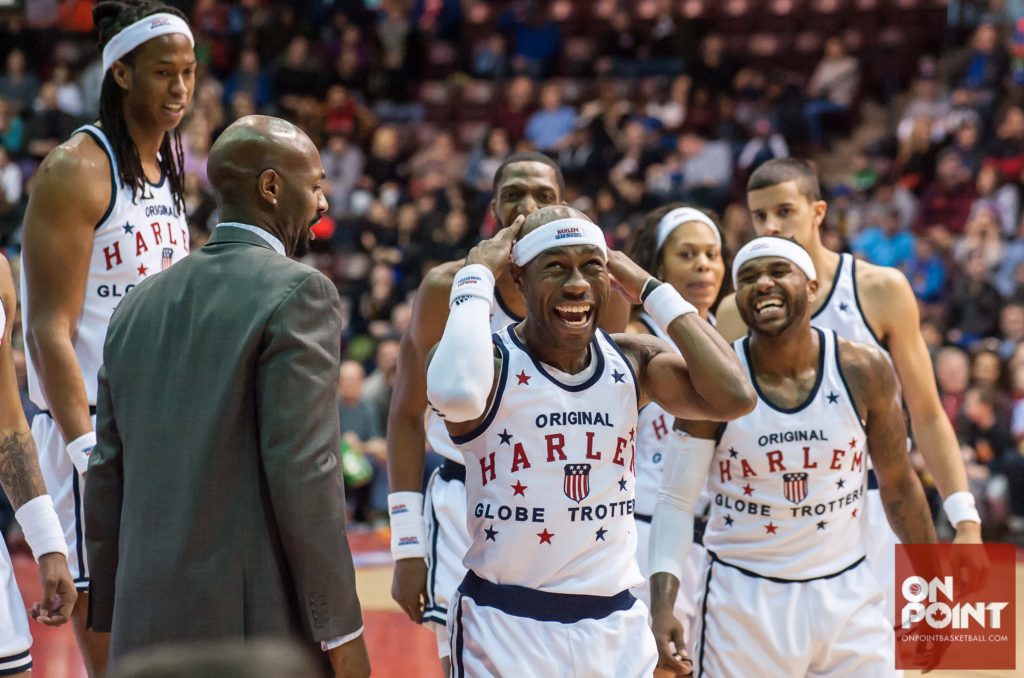 For 90 unremitting years, people have beheld the sheer wizardry put on display by the Harlem Globetrotters. Originally pegged the “Savoy Big Five”, the Globetrotters have journeyed through the entire globe since their inception in 1926, dazzling fans with their rib-tickling but entertaining basketball spectacle.

From Meadowlark Lemon, who was one of the pioneers of the inaugural Harlem Globetrotters team that traveled the world back in 1956, to Fred ‘Curly’ Neal – considered by many to be the best ball handler to ever grace a Globetrotters uniform, the team has caused sheer bedlam wherever they have gone, and to do it for 90 straight years is a feat that very few sports organizations can say they have accomplished.

“This is our 90th year, not too many organizations last 90 years. So we’re very happy to be a part of it,” said Tay “Firefly” Fisher, who joined the Globetrotters back in the fall of 2009. “We’ll be able to wear our throwback uniforms, you know, the little white throwback uniforms, to let people know that they’re going to remember all of the greats such as Meadowlark Lemon and Curly Neal, all of the people that paved the way for us today,” said Firefly. “This is a tradition that’s been going on for 90 years and hopefully another 90 years and we’re just happy to be here.”

Part of the U.S tour involves a series of stops in Canada where the club is making its way across the nation from Vancouver, B.C all the way to Charlottetown, PEI. If not for traveling the world and seeing inimitable cultures or getting paid to play the game of basketball, then having the opportunity to entertain and make people laugh is something that takes precedence over anything else, especially with regards to the children.

“It’s all about having fun. We’re just trying to teach kids, everybody, if you’re going to play the sport you have to have fun doing it,” said the 5’9 Firefly before his Globetrotters took the court. “We don’t teach kids to do anything that they’re not supposed to do, but you gotta’ go out there and have fun and enjoy it. Basketball is a very tough sport but when you come to a Harlem Globetrotters game, you’re introducing the game to a lot of kids who might not ever [had] played basketball before or might be playing basketball but they want to get better. This definitely boosts a lot of kids’ confidence,” added Firefly.

“One thing I love about being a Globetrotter is that you don’t have to love basketball in order to enjoy what we do, and not too many professional sports [organizations] can say that.”

Part of the fascination with the Globetrotters is that, as mentioned by Firefly, people do not need to be basketball fans in order to enjoy and appreciate a Harlem Globetrotters show. Basketball does take centre stage at the event; however, the comedic shtick put on by the players and coaches, the strategically structured and rehearsed skits that each and every Globetrotter has to memorize and deliver effectively, the perpetual improvisation that goes into each show, is precisely what makes the event such a spectacle for everyone involved.

For Firefly, there’s nothing more satisfying than putting on a Globetrotter uniform that’s entrenched with a deep and rich history, and to share it with the fans is something that cannot be simulated anywhere else.

“These 90 years would not have been possible if not for the fans,” mentioned Firefly as his eyes lit up with unreserved passion and excitement. “We want to make sure we give them something that they paid their hard earned money to come in and watch us play. We’re all great basketball players first. That’s the reason why we’re Harlem Globetrotters. But the entertainment part that comes with it, you have to learn it, and after the game when those kids go home and have a picture with their favourite Globetrotter and an autograph on a T-shirt or a basketball, that’s something that they’ll hang up,” said Firefly. “Hopefully, years down the line, they can bring their kids and the tradition continues going.”

“That’s what it’s all about with the Harlem Globetrotters.”

Here’s to another 90 years of uninterrupted showmanship.