Saturday, February 21st marked the third session of the Canadian Youth Basketball Tournament (CYBL). There was a full slate of games on the schedule at Waterdown District High School in Hamilton and despite the blistering cold outside, which seemingly found its way through the interior of the institution, the gyms were packed and ready for a full day of competitive and entertaining basketball. As with all CYBL tournament sessions, this one did not disappoint: a seemingly prevailing theme.

Despite having three talented players governing guard duties, YAAACE continued with their struggling ways as they fell to a surging Toronto Triple Threat (Bobby) team by 25 points. Much of the struggle stemmed from YAAACE’s lack of size in the interior coupled with an inefficient offense that relies too heavily on isolation basketball. They were also under-manned with only 6 players suited up, which didn’t help their cause either. Hopefully they can bolster their lineup in the coming weeks. Conversely, Toronto Triple Threat showed how they have turned the tide since their initial session almost a month ago. After leading 30-11 after the first 18 minutes of action, Akiyah Stewart and company did their best on the scoring end to uphold the large lead while maintaining consistent intensity on the defensive end. Stewart – a combo guard who, although plays point guard, is an extremely able scorer – and epitomizes how a leader should run their team. When Triple Threat needed to score, she would always provide an answer- whether by hitting a tough shot on the perimeter or by making the right pass for an eventual basket by her teammates. She may be small in stature but she is extremely feisty and persistent on both sides of the floor – an invaluable trait that can’t be taught. In the end it was talent and hustle that allowed Toronto Triple Threat to take the 67-38 win over YAAACE.
____________________________________________________________________________

It was an upward battle from the opening tip for the Flamborough Fire – despite having a relatively talented and interconnected unit. Canada Elite maintained their excellent play (and undefeated streak) as they extinguished the Fire in blowout fashion. Emini Clough, Tiffany Reynolds and Avolyn Sharp were nearly unstoppable in the opening frame (and subsequently all game) as they looked to push the ball on every possible possession. Sharp – although fairly undersized – possessed an unyielding disposition and a ‘get out of my way’ mentality Saturday afternoon as she looked to attack the paint ferociously. Not only was she effective with dribble penetration and creating opportunities for others, but she also displayed a decent stroke from the perimeter, too. Reynolds – possibly Canada Elite’s best and most active defender – showed her prowess on both ends of the floor, especially on the offensive end where she successfully converted on countless drives and slashes to the basket. Much of her scoring explosion came off of forced turnovers and an unwavering desire to get high-percentage shots. Emini Clough – perhaps the most consistent (offensively) and most talented player on Canada Elite (and some could argue in the tournament) – did her daily duty as she poured in a game high 22 points, all of which came off of her own play making ability (e.g., crossover, offensive rebounds) or on the break off of forced turnovers and defensive rebounds. In the end, it was Canada Elite’s unwillingness to stray away from their merciless full court pressure (which caused a ton of turnovers) that allowed them to build a large lead and, eventually, take the 26 point win, 72-46.
___________________________________________________________________

Perhaps the most intense and competitive matchup Saturday afternoon came between two of the top teams in the CYBL tournament. Both Canada Elite and No Limit Performance put on a show for spectators as they dazzled the crowd with ‘ooo’s’ and ‘ah’s’ on several instances. Typically, Canada Elite comes out strong in the early stages of any game no matter the competition. But it was No Limit Performance putting on a spectacle early as they prevented a ton of easy baskets for Canada Elite while maintaining obedience to their offensive game, which was entertaining in itself. No Limit runs a disciplined and structured offense centered on play calling and constant ball movement, whereas Canada Elite – because of the sheer talent and skill amongst everyone on the team – relies more on isolation plays and transition basketball to put points on the board – a sort of fragmented offense that works with the talent they possess. Hallie Nickerson, who possesses invaluable and unparalleled leadership skills, is typically the high scorer for her team, but it was Megan Macleod who absolutely dominated the paint in this contest. Not only was she a terror on the offensive glass, but it was also her smooth post moves and sheer length (on both ends of the floor) that forced Canada Elite to focus much of their attention on her. In addition to her dominant post game, Macleod fostered a level of passion and charisma that was undeniably contagious (eventually, her teammates equaled her intensity and will to fight, too).

Justina King singlehandedly took control of this game from the get go. LFB, as a team, is the most unselfish and cerebral unit at the CYBL tournament. King’s selfless and altruistic nature ignited a contagious ‘passing and team ball’ ideology that each player seemingly bought into. She has the skill set to score on any given opportunity, but making the right pass or play seems more imperative and satisfactory to her than the glory that comes with being a go to scorer. Although she scored 18 points – none of which were forced shots – her ability to envision plays before they happen is unique and uncommon amongst many point guards her age. LFB’s willingness and determination to swing the ball around the horn and make the defense work is partly why they get so many high percentage shots, and it starts with King at the helm.

YAAACE’s struggles on both ends of the floor have been well documented by every team that’s played them so far. Not only does this young club struggle to forge a decent offensive scheme – which can be attributed to a lack of an inside presence – but their defensive strategies and overall effort seems too inconsistent to be effective. They have talent, without a doubt, but their inability to work as a cohesive unit and simply gel together prevents them from creating any fluidity on the offensive end. Again, their 6 player roster puts pressure as well to keep up for the full game.

Special Thanks to Chris Skinner of the CYBL 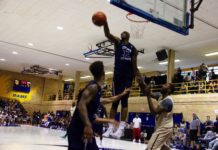 9Now, MADE, and ACE come away with victories in Week 3... 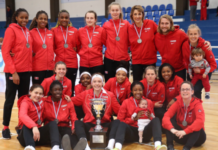