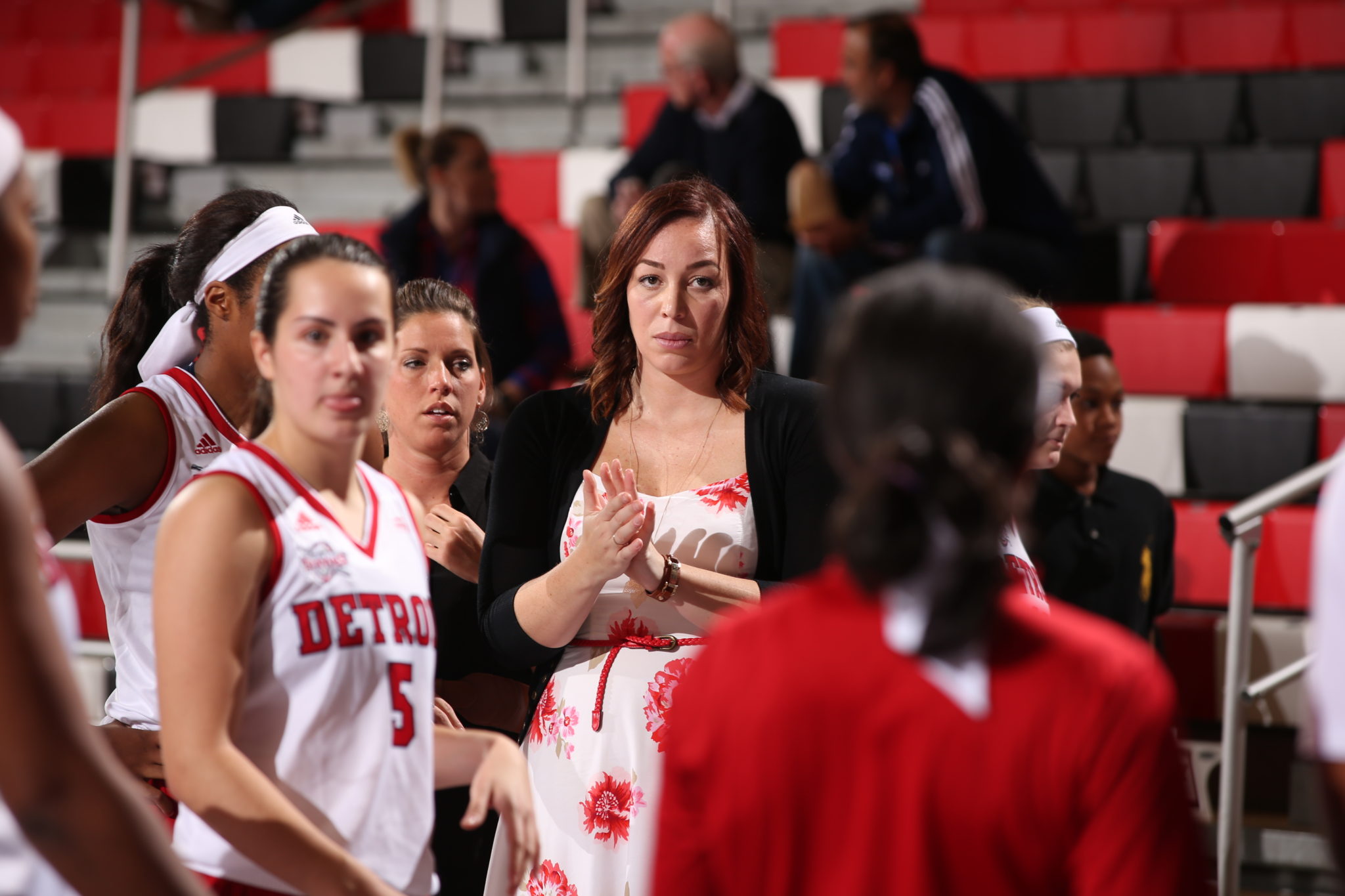 Nestled alongside the St. Mary’s river and just short of a 15 minute drive to the United States border is the third largest city in Northwestern Ontario – Sault Ste. Marie. Though the sports history surrounding Sault Ste. Marie doesn’t generally extend past hockey and some Canadian Football anecdotes, it doesn’t mean other–perhaps less prominent sports avenues haven’t been explored in the Sault (pronounced ‘Soo’).

Current Detroit Mercy assistant coach and former longtime member of the Canisius College Golden Griffins, Tara Fleming – a native of Sault Ste. Marie who has burrowed herself into a comfortable situation south of the border in Detroit, Michigan – chose to explore basketball during her childhood over other sports.

“Honestly, the first time I remember really thinking about basketball was [when] my older brother was playing. And, of course, being four years younger you want to do everything your brother’s doing, “ said Fleming over a phone interview.

“Our elementary school – St. Thomas—in Sault Ste. Marie didn’t have a team. I remember walking in on him and his friends playing, we used to play on our street on the road, and I just kind of fell in love with it through watching him do it. I asked him to coach our 7th grade elementary school team and it really started from there. I played in grade seven and grade eight with him as coach and just kind of fell in love with it,” added Fleming.

Though Fleming’s relationship with basketball began to slowly grow into fruition, the passing of her mother – Cheryl Fleming – ultimately forced her journey to a more southern part of Ontario to a town called Owen Sound. Through the support of her high school basketball coach at West Hill Secondary and close family and friends, Fleming began to take the game of hoops more seriously. She maintains that if not for the guidance and tutelage of her high school basketball coach, Lorne Johnson, she more than likely would not be where she is right now.

“Really, I wouldn’t have played college basketball, I wouldn’t be here without him,” said Fleming in reference to coach Johnson. “He pretty much told me early, ‘if you’re going to do this then it’s 100 or nothing. ‘You’re not going to part-time this, if I’m going to help you with this then you need to be committed’. Him pushing me to run after practice and him pushing me to get in early and get shots up, I mean, he was really the one who kept pushing me saying ‘you can do this, I think you’re talented enough,” added Fleming.

“It was a certain kind of tragic past that led me through to be where I am today but I truly feel like everything happens for a reason. My drive in high school was really [because] of the death of my mother. She was my drive, I was doing it for her and when I was blessed enough to get my full scholarship [to Youngstown] and get my free education, I really went in thinking I was going to be a strength coach,” Fleming said.

During her final year at Youngstown State University – where Fleming played in 107 career games from 2001-05 and ended her career ranked second all-time in school history with 125 blocked shots – her head coach pulled her aside and asked if she’d ever consider coaching basketball. Despite not giving real thought to the idea beforehand, there was no doubt that the role was a perfect fit for Fleming’s driven disposition and sheer passion for the game.

“She said, ‘listen, you’re a coach on the floor, when we have timeouts and the coaches are huddling, you’re the one talking to the team. She’s like ‘you damn near do it anyways, I think you should give it a try,” said Fleming.

“That’s why I stayed down at Youngstown to be a student assistant, just to see if this whole world was something I wanted to be in. And you kind of figure out very quickly because it’s a lifestyle, this job, it’s not a 9-5 and you can’t shut it off. So you figure out very quickly if you love it or not and when you’re working 100 hour weeks doing film and recruiting and mailing and everything else, it didn’t feel like work.”

“That’s when I knew that this is the world I needed to be in,” mentioned Fleming.

Following her final year at YSU as a student assistant, Fleming made the switch to Canisius College in Buffalo, New York where she spent nine seasons (2006-15) on the sidelines for the Golden Griffins, leading the program to seven MAAC Championship quarterfinals appearances and a run to the title game as an assistant, according to the Titan’s website.

Amidst her nine seasons at Canisius, the school set the Division I record for wins with 24 in 2008-09, advancing to the MAAC Championship game and earning a ticket to the WNIT. She also helped the Golden Griffins secure 20 MAAC athletic honours and accolades and 39 Academic All-league selections during her time in Buffalo (Detroit Mercy website).

Throughout her time at YSU and Canisius College, Fleming was able to absorb a breadth of knowledge from several different coaches, including head coach Terry Zeh who’s embarking on his 12th season with the Golden Griffins and someone who ‘taught her more than she could ever imagine’. She maintains that learning from coaches like Zeh, Johnson and Scott has been conducive to her growth as a coach and has only inched her that much closer to her dream of one day becoming an NCAA head coach, something she hopes to turn into a reality sooner rather than later.

“There’s no question in my mind that I want to be a head coach,” said Fleming. “I think that’s why the move to Detroit was so important for me. I knew that you need variety on your resume. In order for an athletic director to look at you and know that you’re prepared enough to be able to handle any situation – they have to see that you’ve handled situations,” added Fleming.

“There’s no question in my mind that I want to be a head coach, but the thing I love most about my career is that it’s ever evolving. There’s never a point in this job where you’re done learning. I feel like in my heart I’m going to be ready to be a Head Coach anytime…but I’m thoroughly enjoying where I am now. I’m still learning from my co-workers and my boss and this administration and the players that I work with. I’m truly blessed in that way,” added the former YSU standout.

Though her aspirations one day involve heading her own team, it’s important to highlight her achievements as an assistant at Detroit Mercy. In her first go-around with Detroit, Fleming helped coach the Titans to a 15-15 record in the 2015-16 season, including an 11-7 mark in the Horizon League. According to the Titan’s webpage, it was the most league wins since the 2011-12 season and most overall wins since the 2012-13 campaign.

She also works tirelessly with Titans’ post players, including the 2015-16 Horizon League Sixth Player of the Year, Brianne Cohen, who was sixth in the conference in scoring at 15.6 points per game (Detroit Mercy webpage). While her Titans haven’t played their best basketball so far this season – just 6-7 overall – Fleming understands that it’s a gradual process and that it starts with fostering a positive culture, both on and off the court.

“We strive to be our own champions and in our own way,” said Fleming. “The thing that Bernard does really well is he makes it about culture first. We’re going to be a disciplined team on and off the court. We’re going to put academics first, and we’re going to be a family. Our theme this year is ‘we, not me,’ and that’s something we push in practice and push off the floor, we push it in the classroom.”

“It’s not about you, and if you can go into every single day and every single practice focusing on that, then you’re going to make your teammates better. We have the talent with the players we have now and the players coming in we know we can win championships here,” added Fleming.

Not unlike the multitude of Canadian coaches, players, scouts and basketball enthusiasts who have ventured off to different roles, at different levels, in different parts of the world, Fleming is quite cognizant of the burgeoning evolution of basketball in Canada within the last decade or so, something that doesn’t surprise her in the slightest.

“I think it’s amazing,” Fleming said. “It’s amazing to see the output that’s happening now because of the work that Canada basketball has put in early. A decade ago they started doing these targeted athlete programs and you started to see them target young players from certain areas. You’re seeing the result of all of that hard work early,” mentioned Fleming.

“You’re seeing our junior national basketball teams provide results and bring home medals. As a Canadian there’s nothing that makes me prouder than not only seeing our national levels perform and compete with the best players in the world, but on an NCAA level, I enjoy going home and recruiting women’s basketball players,” Fleming added.

It’s important to highlight individuals like Fleming and acknowledge their achievements in the sports world. Whether coaching on the sidelines, playing competitive Division I basketball or working tirelessly on the recruiting side of things, one thing is for certain – Tara Fleming is the epitome of a hard working Canadian who continues to transcend borders – both literally and figuratively – with her interminable persistence and strong-willed determination.

From ceaselessly mimicking her older brother and his friends on the basketball court back in Sault Ste. Marie to making the difficult transition from player to coach at YSU, Canisius and now Detroit Mercy, it’s easy to see why Canadians like Fleming have been able to find so much success stateside.

She is, unequivocally, the gold standard for aspiring coaches and a true Canadian trailblazer for women.