Our ongoing series of stories from the Eastern Commerce C.I. family and beyond!

Ola Matti graduated from Eastern Commerce Collegiate Institute in 2002.  During his career at Eastern he won a Toronto District School Board City Championship every year except in 2000 in an overtime loss against Oakwood inside the legendary Jarvis C.I gymnasium. Matti had the honor of being selected to participate at the Nike All-Canada Camp where he played amongst some of the highest level athletes in the nation. Matti was a major contributor on the senior team whose skill excelled in all aspects assisting his team in winning the inaugural 4A OFSAA tournament in 2002. He has also participated in some of the most prestigious tournaments within the U.S. as well as overseas. Matti signed a letter of intent to attend Lamar University in Beaumont Texas; Southland conference where he played his freshman and sophomore seasons. He then transferred to Canisius College in Buffalo New York; M.A.C. conference where he finished off his junior and senior years. Here is the story in memory of Eastern from Matti and his experience.

I initially didn’t want to attend Eastern to be honest. My first choice was to attend Northern Secondary school to play for the football and baseball teams. I also chose Northern prematurely because I wanted to get out of my neighborhood, even if it was just north of the downtown core. It wasn’t until after the successful bantam season, and being called up to play senior at OFSAA that same year, that Eastern was and still is a close knit family which had my best interest. Eastern was a 10 minute walk from my neighborhood, and I felt comfortable learning in that environment. It didn’t differ from how I grew up and the people I grew up around. I have plenty of memories regarding Eastern. One memory that will forever stick out in my mind is the support from the student body and the community. Ranging from sponsors, teachers, and scouts that would frequently attend our practices and games. Their support really motivated me and helped me realize that if you work really hard for something you aspire to, it will pay off in the long run. It was through those difficult times that I knew I could always turn to those who believed in me and my dreams.

The ’02 class that started the OFSAA run wasn’t the most talented team but we were very “hungry”. We had a good mix of younger guys like Kingsley “King” Costain, David “Big Davey” Thompson, Tristan Blackwood, and Tyrone “Turk” Mattison, who were selected to join the team along with some of the veterans like Jermaine “Rock” Anderson, Tevya “Tev-Man” Reid, Emu. K. (transfer from Churchill) and Cameron Johnson. The younger guys certainly put up great competition during practices and made it difficult for the veterans to play. The team was so deep, that every single player had the skill to be a starter. This is why practices consisted of hard, aggressive competition at all times because everyone wanted to prove that they should be awarded the starting spot. Going into our OFSAA championship, we were certain that we were going to pull away with a win. Oakwood was not aware that they would not be able to compete to our standard. The foundation that our team had build with hard work and sacrifice by every player, coach and admin staff was immeasurable. Anything less than a gold medal that year would have been unacceptable for the standard we were trying to build. I believe this blueprint of success that was established by our team was the reason why Eastern was able to win four straight years in a row.

I was very successful during the time that I had attended Eastern. Not only was basketball a huge success, but what happened off the court academically was also very important. I wouldn’t have been able to accomplish all my goals and successes if it wasn’t for Miss Khan, Trevor Bullen, Vince Mead, Mr.Edwards, Donna Langille, Cherylyn Scobie, Roy Rana, Coach big John Smith, Mr. Berry and GM Lou Sialtsis. These were all influential people who had helped me graduate on time and assisted me with anything I needed. They have been a major component of my successes and the reason I accepted my scholarship to Lamar University. Their foundation and values have benefited me as a person and influenced me to always strive for greatness in order to achieve my goals.

Being a part of the Eastern culture kept me focused and steered me in the right path. I was taught to channel my pain and aggression into competitive sports, and not to feel ashamed of who I am and where I came from. Eastern had the ability to take youth from neighborhoods that are deemed at-risk and build them to sustain a positive environment that taught the community about the importance of success. Eastern wasn’t for everybody and people who went there will tell you that. Regardless, it was a safe place for many who wanted to escape or take a break from the reality of hardships and adult-like responsibility. This school to me was more than basketball. Eastern was truly a family run program.

14 ATHLETES MOVE ON TO SECOND PHASE OF CADET MEN’S NATIONAL... 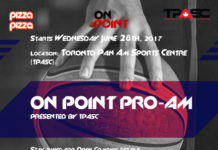 On Point Summer Pro Am Hosted by TPASC Week 3 Scores...