Eastern Commerce Collegiate Institute has been an landmark Toronto institution for over 85 years. As you probably know by now the school is closing down and an incredible legacy and chapter in Toronto basketball will go with it. The memories have been epic and the history is filled with 8 Senior Boys provincial championships & 2 Senior Girls provincial championships as well as producing some of the best basketball players this country has ever seen, including NBA player and All-Star Jamaal Magloire, now a member of the Toronto Raptors coaching staff! We welcome submissions from the basketball community from within the Eastern Commerce family and outside. If you have a great memory of the school’s basketball program please submit to us here at On Point basketball at [email protected] and we’ll share your story with the masses.

Eastern Commerce…you may be soon gone…but your excellence in the world of basketball will never be forgotten!

Tevin Bartley played for Eastern Commerce, attends Allen County Community College in Iola, Kansas and shares his memories on what made Eastern Commerce such a special place to go to school and play basketball.

I went to Eastern Commerce for the basketball program history that the school had. I thought I was good enough to make the Junior A Team in the first year. I went into Eastern thinking everything was going to be easy at 15 years old. I didn’t make the team Junior A Team in Grade 9, 10 or 11. I wanted to stop playing. By Grade 10, I thought about giving up & quitting basketball forever but from some advice from my older brother, I continued to play & work twice as hard. I worked on my weaknesses & turned them into strengths. I made A Team in Grade 12, with a short basketball season. I took an extra year & it was by far my favorite one. We were Division Champs & Toronto City Champs, winning both games against our rivals, I played up to expectations & still continued to learn. I worked hard all summer long & commited to a Junior College(Juco) in Iola, Kansas. All because I chose not to give up & quit. Eastern is the best high school in Toronto for basketball & I say that proud. Why? It’s the relationship between the coaches & the players, it’s tough love. You have to earn everything & that’s what Coach Mac (Kevin Jeffers) & Coach Juice (Gyasi Moffett) taught me, playing with confidence & belief in yourself. They were always hard on me because they knew the potential I had when I didn’t know it myself. I’ve had the opportunity to meet some of the legends & former Eastern players, for that I’m forever grateful. I’ve had the opportunity to train with some as well. Playing for Eastern Commerce was a humbling experience & I’m glad to be apart of this high school’s history, I wouldn’t change a thing of the past, I’ll never forget this school & what it has done for me. I’ll always be a proud Alumni & represent Eastern Commerce forever. 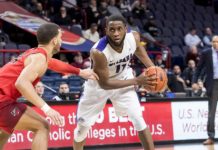