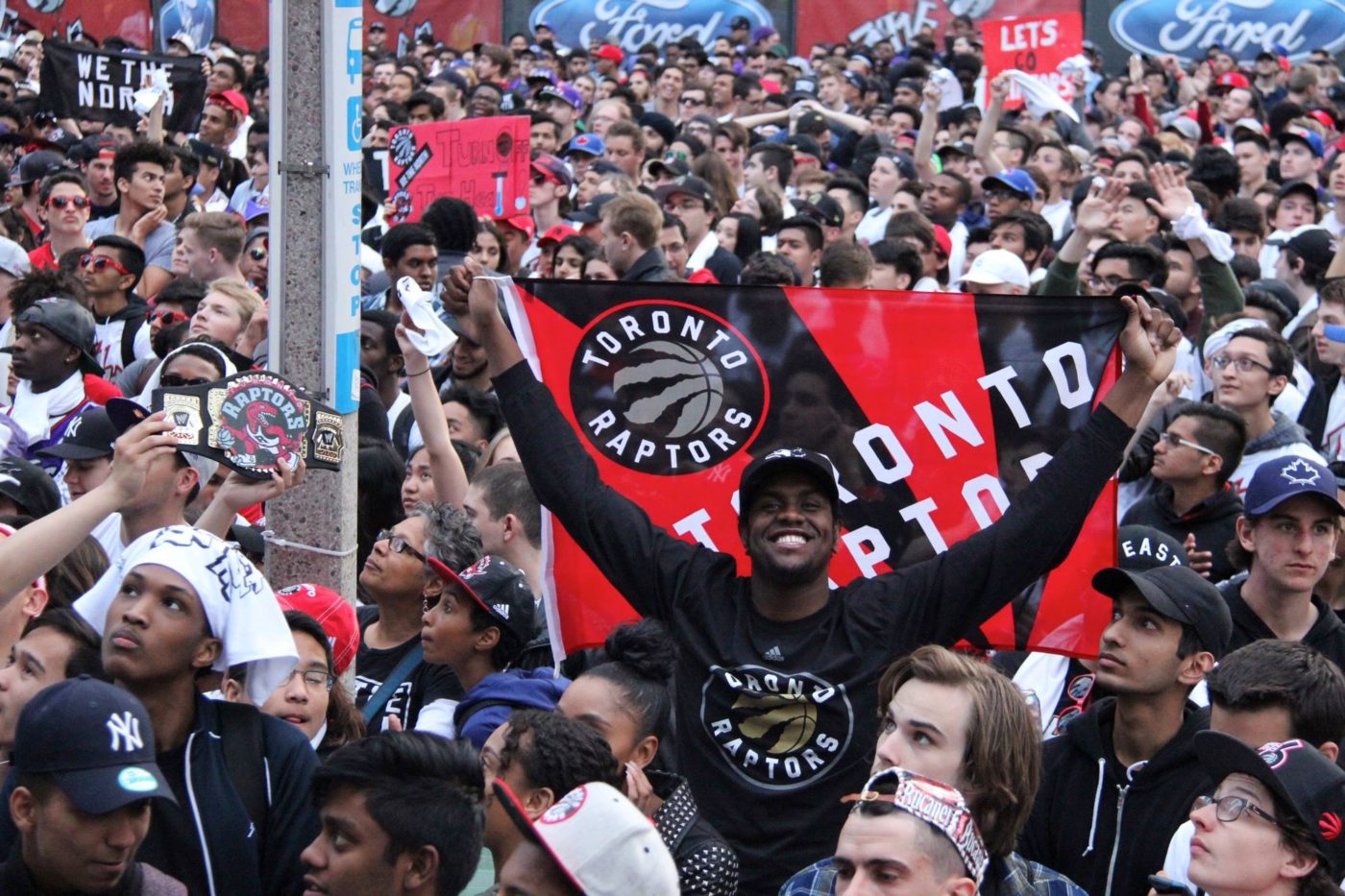 Special to On Point Basketball by Bryan Meler

Game 3 between the Toronto Raptors and Miami Heat was going down to the wire in the American Airlines Arena. Outside the Air Canada Centre in Toronto, Raptors fans cheered as if they all had front row tickets.

Instead, they were outside in ‘Jurassic Park’.

When Kyle Lowry hit a pull-up jumper to put the Raptors up 89-86 with 31.7 seconds to play in regulation, over 2,000 fans went into a frenzy; hugging, jumping, waving their ‘We The North’ towels, and putting up high fives to all the other diehard fans that surrounded them in the Raptors Ford Fan Zone.

They waited for the clock to fully expire, not wanting to miss any of the late game heroics that had become such a regularity in the series. Those that had left before Lowry’s half court heave to force overtime in game 1, had learned their lesson.

Patiently, they watched the Raptors finish off the win as the last remaining bits of rain dripped down their ponchos.

“It’s crazy how many people came even with the rain today,” said Michael, a middle school student that carried around a homemade Toronto Raptors heavyweight belt. “We have such high hopes for this team, you can tell with how many more people are coming out.”

A rainy day in Toronto had finished with an ending that seemed to brighten up the entire city’s mood. With more people allowed in ‘Jurassic Park’ for the first away game of the series, a massive crowd of Raptors fans hit the downtown streets chanting ‘We The North’, as they celebrated the win.

It was one of the many chants that echoed throughout Toronto during the NBA playoffs.

While waiting in the wind, rain and occasional sunshine, Raptors fans rallied themselves together with chants that were sparked by the constant cheering and booing in ‘Jurassic Park’. At times, it almost became impossible to hear the game commentary.

During timeouts, fans spoke their minds and continued fuelling the energy that turned Maple Leaf Square into the NBA’s best fan zone. With the Raptors being Canada’s only professional basketball team, the Canadian national anthem even became common for groups of fans to sing with pride.

‘Freeze the Heat’ also took on a literal meaning, most notably when it hailed and snowed in Toronto on the day of game 7. No matter the weather, the dedication of Raptors fans seemed to grow bigger with each game. By the time the Heat were facing elimination, Raptors fans needed to start lining up an hour and a half before game time to assure themselves a spot in the heart of ‘Raptors Nation’.

The usual capacity for ‘Jurassic Park’ was reached before tipoff in the final three games, with 2,200 fans allowed for home games and 2,400 for when the Raptors travelled to Miami. That didn’t stop many more from joining the party outside the ACC, with extra sections added that went as far as Bremner Blvd and York St, giving space to 2,000 extra fans.

“My friends and I decided to drive from Hamilton, because I wanted to experience all the excitement I’d seen on TV,” said Razvan Moldovan, who cheered in one of the extra fan sections during game 6. “We got here at 6:30, but still couldn’t get in because of how packed it was.”

Toronto Blue Jays fans also joined the extra sections of ‘Jurassic Park’, after finishing their baseball games in the nearby Rogers Centre. For game 3, the lineup leading into ‘Jurassic Park’ was filled with a lot of blue and white, the colours of the Jays, after they had lost an afternoon game to the L.A. Dodgers.

“We were already down here in the ‘6’ watching the Blue Jays, and thought we’d come down and rep the Raptors too,” said Anthony Williams, who came to game 3 with his friends. “It’s great to be surrounded by so many fans, it’s night and day compared to watching it at a bar.”

For any fan that wanted the pleasure of enjoying a beer during the game, they were allowed because of ‘Jurassic Park’s’ tailgating experience. Other food and drinks were also sold, helping Raptors fans stay filled with energy as they waited outside for hours at a time.

The provided Raptors gear was another component that helped engage the Ford Fan Zone throughout the series. Fans were given a ‘We The North’ towel to wave once they entered the square, and other items such as red sunglasses, Raptors drawstring bags, and red shoelaces to tie around their fingers like all-star guard, DeMar DeRozan.

With the fan gear and the countless posters that have appeared in the series, the ‘Jurassic Park’ crowd reflected the colours of the Raptors.

Kiwuan Kerr made his first trip to ‘Jurassic Park’ for game 1 of the Raptors versus Heat series, and caught a playoff t-shirt in his first scrum. Moments later he couldn’t believe the luck that followed, when a Raptors spokesperson approached him and his friends with free tickets to that night’s game.

Winning free tickets doesn’t happen to everyone at ‘Jurassic Park’, but it adds a sense of anticipation that entices fans to come back for the next game. Spencer Jones, who’s attended every playoff game this year in some fashion, actually prefers being in ‘Jurassic Park’ compared to the ACC.

“I went to watch game 2 of the Pacers series in the ACC, and no one was going wild. Instead they were all just sitting and eating their popcorn,” said Jones, who’s face was covered in purple body paint. “Out here is where all the real fans are, everyone is dedicated to the team. I just love that.”

The dedication is apparent through the many fans that seem to over time become crowd regulars. ‘Raptain North’, a Toronto Raptors superhero, is one of them. With his Raptors shield, helmet, and white tracksuit, ‘Raptain North’ actively greets other fans near the ‘Jurassic Park’ entrance when “he’s not fighting off the bad guys.”

“I wanted to mix my two loves; Marvel and the Toronto Raptors,” said ‘North’, holding his shield near his chest. “I’ve seen other crowds around the NBA, and I can say that we have the best fans.”

There rarely are any ‘bad guys’ in ‘Jurassic Park’, with no serious offences breaking out during the Raptors-Heat seven game series. It provides an atmosphere that is also welcome to everyone, even families with small kids that are eager to dip their hands in Raptors tradition.

Sam Bonilla goes to games with his wife Maria, and 10-year-old son Fernando whenever they have the chance. Fernando labelled the atmosphere as ‘amazing’, during game 3 of the series. Other kids such a David, Daphne, and Jordy were also in the crowd waving their ‘We The North’ towels. Game 2 was their first time in ‘Jurassic Park’ after their dad, Tom Mes, decided it would be a good idea to experience more of Toronto’s sports culture.

“You don’t see many families, but it’s still a family like environment,” said Mes. “We’ve really had a good time so far, it’s what you expect from Toronto in general.” David, 11-years-old, added “We love baseball, and I love cheering for the Jays. But I feel the same type of excitement here in ‘Jurassic Park’, I hope it’s not the last we get to come.”

The Mes family had to leave early that night, nothing unusual when there’s a school day ahead. The games between the Raptors and Heat usually went deep into the night, especially with three of the first four games needing an overtime period to decide the winner. Games that didn’t require OT, were still competitive till the end. Except for game 7, where an afternoon game set the scene for a perfect ending.

Raptors fans have been through a lot over the years, and this year’s Eastern Conference Semi-Finals round provided a breakthrough. The 2016 postseason marked the first time they’ve made it to the second round since 2001, and the first time in franchise history they’ve advanced to the Conference Finals.

Game 7 started with fans wearing their ponchos and winter jackets, adjusting themselves to whatever weather condition they faced. With tipoff at 3:30 p.m., fans started to lineup as early as 1 p.m. to be part of the Raptors’ historic feat. The home crowd atmosphere in ‘Jurassic Park’ was so large and loud, it made you question if there was any chance they could hear them inside the ACC.

The support was there, while the Raptors cruised their way to a game 7 victory, behind a dominating fourth quarter, that they won by a 30-11 margin. Fans began to celebrate their team’s success, longer than they had for any of the other highlight moments of the series. It had all come together for one final cheer.

Near the centre of ‘Jurassic Park’, people jumped on the recycling bins to stand above the crowd for their chance to rally the thousands of dedicated fans that never seemed to lose hope. Other fans hugged in groups, while others hung their arms on their heads in disbelief.

‘Jurassic Park’ was now ready for the Eastern Conference Finals.

Special Thanks to the amazing Toronto fans, Toronto Raptors and Abby Albino of MLSE for their hospitality.