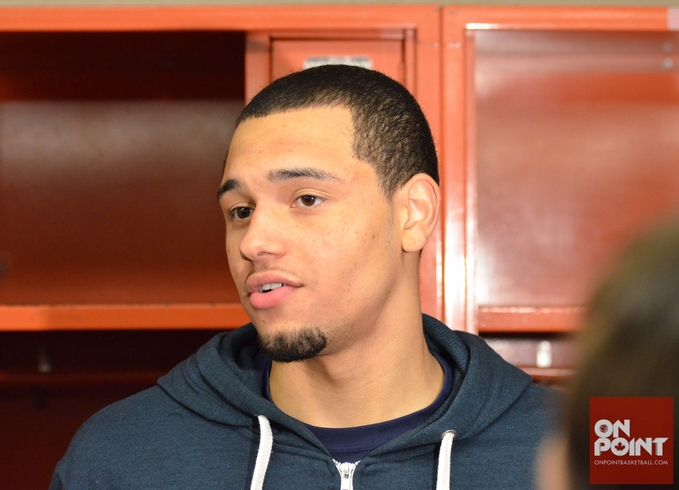 By Mark WilliamsonSeptember 4, 2017No Comments

OVO Bounce now in its fifth year, where professional players come home or into the city and showcase their talent for the fans for one week.  Monday to Thursday games were open to the public and free of charge. Friday, being more exclusive due to added celebrities or potential higher profile NBA players, required entrance by wristband only and still free of charge.  OVO, short form for October’s Very Own (Drake), and CIA Bounce (AAU basketball club) joined forces in 2013 for the purpose of kicking off Caribana weekend with a Pro-Am tournament, which also coincides with Drake ‘s OVO Fest on the Civic Holiday each year.

Ennis, who was drafted 18th overall by the Phoenix Suns in 2014, always wanted to start a camp for the community in order to connect aspiring athletes with the dream to play basketball learn from professionals, and have fun in the process.

Lets go back to the beginning of the Tyler Ennis Camp and the final OVO Bounce game back in July of 2015 where those in attendance saw DeMar DeRozan of the Toronto Raptors play in front of the home crowd at the Metro Toronto Convention Center. As the night continued, the kids were in for a treat, seeing NBA MVP Kevin Durant attend the festivities, alongside Drake, Andrew Wiggins and many others throughout the evening.

The next day, August 1, 2015 was a beautiful Saturday morning in Brampton, as the doors opened for the 1st annual Tyler Ennis Camp at Brampton’s Soccer Center. It included many volunteers and all had including Tyler had heavy hearts as their very close friend and family member, Canadian rapper Redway had died in a fiery crash in the early morning of that day.

The determination and strength showed by Tyler and family to continue to run the event for the kids who came out to the camp was truly remarkable. Yours truly was present at the camp and heard the news later in the day and as the camp continued I wondered how they were able to continue during such a difficult time, but they did as everyone pushed through admirably for the kids.

When asked if the anniversary of Redway’s passing being synonymous with OVO Bounce had a stronger meaning or connection with the camp, Ennis responded, “Life is short, spend time with family.”  The whole experience of the OVO Bounce is about basketball, brotherhood and love of their city.

Tyler on defence at Syracuse facing the Ryerson Rams

The following year, OVO Bounce changed locations to the University of Toronto’s Goldring Centre, which has been quite the location for many events in the basketball community, including the annual Biosteel All-Canadian game.

Ennis’ camp then changed the date to the Friday afternoon, just prior to the main event of OVO Bounce and in the Goldring Centre as well. Moving it to the Friday allowed all the kids who attended the camp, along with their parents to watch the OVO Bounce finals all in the same day.

Regarding the camp coinciding with the OVO Bounce Final on the Friday, Ennis mentioned that it’s all for the kids, letting them come to an event that is hard to get in to on the Friday for free with parents and seeing celebrities, NBA stars, but also to learn, work hard alongside professionals but mainly to have fun.

After the camps warm up, Ennis’ opening remarks were, “Work hard and have fun…use the resources and ask questions”.

All kids were separated into ten groups. Each station had kids in shooting drills, defensive shuffles, boxing out, Q & As with Tyler.  The event was in control and kept thoroughly organized by Ennis’ father Tony McIntyre, founder of CIA Bounce.

Ennis continued with his messaging including letting the kids know that as an athlete, it’s still a job, as it requires working out, staying in shape and practicing. Ennis emphasized that he’s out there playing basketball and getting paid and so could they one day, advising many of the campers that through hard work, focus, determination and above all, sacrifice.

When Ennis was asked if there was a saying or a motto that he lived by to help teach the youth, he said, “Sacrifice”. He finished the camp with the same word, telling many kids in the Q & A portion, that he sacrificed many things, such as grade 8 graduation to attend the Five Star basketball camp, High School graduation for Team Canada and being away from home at 17 years old, when he attended St. Benedict’s Prep in Newark, New Jersey.

When I spoke with a couple of parents, and asked what they felt about the camp and it being non-profit, their response was that the kids see Tyler in the NBA and now see him in person and that they can too be just like him.

The camp being a non-profit means it isn’t about personal gain, it’s all about the children, basketball and fun.  One parent said, “Have to make it fun or else the kids may not want to be there.”

Tyler had the same message, he is a regular guy, and these kids can do what he does in the future as long as they continue to put in the work.

Tyler running the offence vs. Ryerson

In the Q & A section of the camp, Ennis alongside Freddy Appiah, Tevin Findlay and Olu Famutimi spoke with campers about their experiences, good and bad.

One camper asked Ennis what was his process was from the campers’ age to NBA.  The camper was about 14 years old and Tyler responded about consistency and that in AAU, he had to go out there and work harder and be better than the next kid. Going to a prep school in Newark, NJ, which was a high crime area, was also a challenge. He also talked about patiently waiting for his dream school offer to Syracuse, despite having others schools to consider as well.

Ennis touched on how Syracuse basketball was very accessible up here on television in his area that helped him form a desire to play for the Orange one day. During one of the sessions, Appiah had a message for the kids, “Use the game, don’t let the game use you”. It was a strong message that he felt passionate about, where it encourages the young athletes to utilize all the resources available to them especially that day within the camp.

Another camper asked Ennis what the transition was like from college to the NBA. Ennis responded that is was tough, starting games his whole life in high school, AAU, college to being drafted to a team with 4 point guards and not playing as much, or at all.  He emphasized that life in the NBA is a rollercoaster ride. Ennis also talked about playing against top point guards in the league and what that was like.  Tyler also reminded the campers that if he isn’t making the right plays or shooting well, the coach will just put the starters back in, so you have to continue to strive to be better.

There were about 180 kids that attended this year’s camp and Ennis spoke about a whole experience for these young stars from various programs throughout the basketball community from as young as 6 to 18 years old.  Ennis added that giving back to the community isn’t just about an NBA initiative, it’s his own personal one while also providing opportunities that some kids may never get.  All the campers who attended had fun with dance competition or half court shot to win prizes, to being treated to NBA stars for autographs and photos, including Stanley Johnson of the Detroit Pistons and former Chicago Bulls guard Jay Williams, who is now with ESPN as a college basketball analyst. The kids enjoyed the day and being able to ask questions that they felt would get an honest answer from Ennis and the rest of the coaches was beneficial. They also got to witness two high level games with many professionals playing the game they love and are hope to go out there and play themselves one day.

The smiles on the kids’ faces at the camp were truly priceless. In the end, as a testament to how humble Ennis Ennis is, the camp will always be about the children, never himself.

This initiative will continue to grow and will only get bigger and better for any athlete able to participate.