(Toronto, Ontario)—The National Basketball League of Canada is pleased to announce that Zane Johnson of the London Lightning has been named Player of the Week for the week ending November 16, 2014.  This is the second time this season in which a Lightning player has earned this honour; Marvin Phillips previously won the award earlier this month.

Johnson, a 6’6″ guard who played collegiately at the University of Hawaii, averaged 18.3 points per game in three London victories this week; he also successfully completed a total of thirteen 3-point shots in those games.

The National Basketball League of Canada (NBLC) was founded in 2011, and is Canada’s only professional domestic basketball league. There are currently 8 teams, with two divisions: Central and Atlantic. The NBLC is committed to being one of the leading professional basketball leagues in the world. The NBLC provides Canadian athletes, international athletes, coaches and officials the opportunity to participate in the game they love at the professional level. The NBLC is also dedicated to raising awareness of the sport of basketball throughout Canada, by providing fans with an exciting and entertaining experience.

For more information on the league, visit www.nblcanada.ca. Connect with us on Twitter at www.twitter.com/nblcanada, Facebook at www.facebook.com./nblcanada or Tumblr at www.nblcanada.tumblr.com. 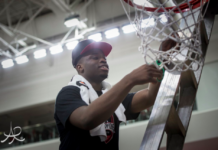