Both teams traded buckets right off the opening tip. Although On Point was missing their point guard and leader Jermaine “Rock” Anderson, they showed no signs of a let down early in the game, scoring within the offence. Flash Forward lacked some offensive fluidity and ball movement early on but newcomer Tyshwan Edmonson, an Indiana native, made a huge difference for Flash Forward and was able to connect on his long distance shots while putting up a sizzling 18 points in the first half as Flash Forward led 49-48 at the break.

In the second half Edmonson continued to light up the scoreboard . Midway through the second half On Point distributed the ball well amongst themselves and played a well-rounded game by attacking the basket, shooting the ball and working it in the post. Near the final seconds of the game both teams were neck and neck, but with Flash Forward’s new added flow in their offense they were able to hang onto the lead and beat On Point basketball and give them their first loss in the league. Flash Forward improves to 1-1 while On Point drops to 2-1 on the season. Ohio native Morgan Lewis led On Point with 22pts. Cavell Johnson 21pts 6rebs and Dwayne Grant scored 20pts played solidly for On Point in the loss.

The game was fairly even throughout as both teams matched up quite well and shot the ball with reasonable efficiency. On Point showed the potential to go to 3-0 throughout the game building up sizeable leads but tended to lose their focus defensively giving up big shots and offensive rebounds. Edmonson shot the lights out the ball and mixed up his offensive arsenal by also attacking the basket and forcing the defense to keep guessing while finishing the game with a game-high 31 points including 8 threes. Congratulations to Tyshwan Edmonson who was the On Point Performer of the game! Kyle Johnson had 16pts & Tut Ruach poured in 15pts as well for Flash Forward. Flash Forward battles The Health Institute at 6:10pm on July 9th.

With Junior Cadougan leading the pack, First Commonwealth showed great fluidity, as the homer Marquette star was moving the ball and creating scoring opportunities for everyone . The teams battled back and forth throughout the first half. Made Men created more opportunities with their post players like Shamus Ferguson and Jason Hannibal as they used their physicality to score inside. As the first half ended  First Commonwealth had some good looks at the basket but were unable to pull away from Made Men who led 47-45 at the break. Before the half ended though, Ferguson had an absolutely electrifying poster dunk and-1 play that would serve to be a major energy boost and momentum builder for First Commonwealth in the second half.

This energy certainly carried onto the second half and First Commonwealth started with a great shooting touch that allowed them to take the lead. Made Men struggled to shoot the ball and even struggled more on the offensive boards, but as the half progressed they started to figure things out and find fluidity in their game to keep things relatively close.  But First Commonwealth’s Cadougan made sure Made Men didn’t get close enough to pull off the comeback winning 105-95.

Cadougan was the On Point Performer of the game as First Commonwealth maintained a consistent near double-digit lead throughout the latter part of the second half. Cadougan led all scorers with 27pts, 11assts, 7rebs and 3 stls and is definitely someone who will be in the conversation for the League’s MVP at the end of the season. Shamar Coombs showed great touch from outside burying 7 threes, good for 23pts, while Denham Brown scored 16 for First Commonwealth in the win as they remain undefeated at 2-0 in the campaign. They battle  On Point at 7:30pm on Wednesday July 9th.

Jevohn Shepherd played well for Made Men scoring 26pts while dropping 10 dimes. Big Mike Fraser contributed 19pts, 6 rebs and 6 assts in a losing cause for Made Men who fell to 1-2 on the season. The defending M.A.D.E. Pro Am Champions have a bye this week and will look to rebound in their last regular season game on July 16th at 6:10pm vs The Health Institute. 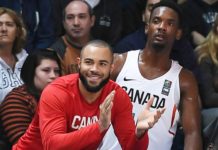