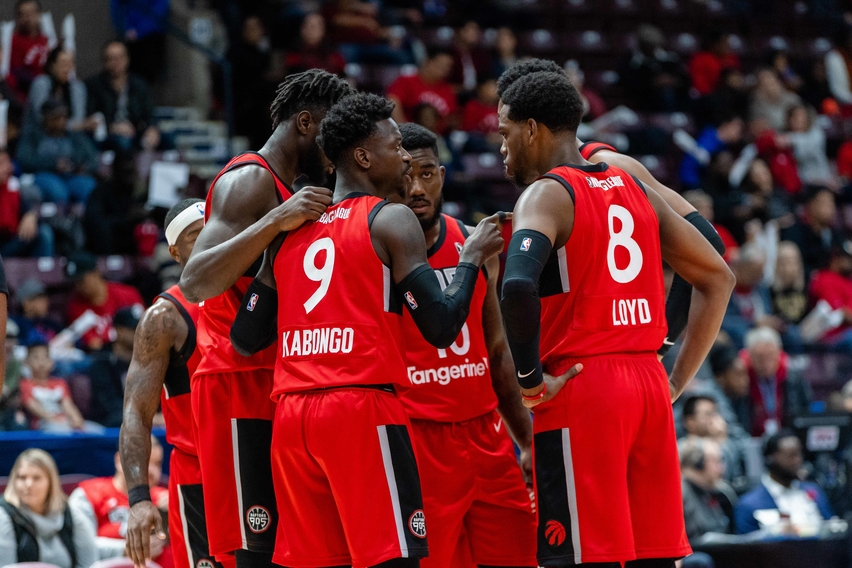 Toronto Raptors Head Coach Nick Nurse stepped on the Raptors 905 centre court, as their Friday game against the Long Island Nets was about to commence on ‘Affiliate Night’, flanked by Danny Green, Pascal Siakam, Greg Monroe, Norman Powell and Lorenzo Brown who all came to cheer and show support for the team next door.

2,693 fans were in attendance to witness both the 905 game and the visiting Raptors’ players. The success of the Raptors 905 in developing NBA-ready players cannot be overstated. Green had 19 G League games before he became a Spurs regular; Brown was last year’s G League MVP; and Siakam, a G League Finals MVP. The Raptors sitting on the sidelines, no doubt, inspired the current crop of 905 players as aspire to step inside the NBA lines.

There are 3-and-D flashes of Green in Malachi Richardson and Deng Adel; flashes of Powell in Jordan Loyd; flashes of VanVleet-like toughness in Kay Felder; and Siakam in Chris Boucher.

Despite the 905 falling 97-90 to the Long Island Nets, Raptors assignment player Richardson led all scorers with 26 points, shooting 5-for-11 from downtown. He added three boards, three assists and two steals, displaying the proverbial 3-and-D stat line.

Richardson proved his NBA worth as Nurse and the other former assignment player, Siakam, watched.

When the Nets had a 16-2 lead in the middle of the first quarter, Richardson’s back-to-back threes provided a momentary spark.

The 905 had a surge in the bottom of the second frame, led by both Richardson and Boucher (19 pts,10 rebs). With 2:50 left, Boucher swatted Nets centre Kendall Gray’s layup attempt, turning the flow of the game in the 905’s favour. Boucher threw a Mississauga block party in the second quarter with three swats. He finished the game with seven blocks.

At halftime, the 905 were up 55-51 courtesy of Boucher who slammed a monstrous dunk and Richardson carried that energy by hitting a triple.

The 905 clung to their lead in the third quarter, outscoring the Nets 15-12. Canadian Myck Kabongo had a great basket late in the quarter, driving past a pick and hitting a floater off the glass after ruling out all other offensive options. He finished with seven points in the game. His fellow Canadian backcourt partner Duane Notice had four points, six rebounds and three assists in the game.

The Nets, however, kept fighting back. The first quarter must have been a harbinger of what awaited the 905.

They were down by 16 points at one point in the first quarter and now had to maintain the lead.

“This game is about runs, especially G League level,” said Raptors 905 Head Coach Jama Mahlalela about the ebbs and flows of Friday’s game.

“There’s tons of swings, 15-point swings, 9-point swings that happen two or three times a game. The hope is to be on the better side of those swings when the game finishes. So we definitely have to do a better job of absorbing their hits and punching back and getting a run for ourselves.”

A layup by Nets forward Kamari Murphy tied the game at 74 apiece. Boucher’s block, on Nets guard Mitchell Creek seemed to momentarily turn the game around. Boucher grabbed an offensive board off Loyd’s missed layup, and flushed it down the Nets’ basket. He followed by hitting a triple, giving the 905 a one-point lead.

With 1:51 left in the game, Boucher threw down another dunk to close the gap within three. However, Richardson telegraphed a pass, which Nets guard Jordan McLaughlin intercepted and converted into an easy layup. The Nets were up three, but Boucher drew a foul and hit a pair of key free throws with 37.9 seconds left, making it a one possession game.

Boucher scored more points in the fourth quarter than he had in the first three. He erupted for 11 points, including two blocks, rising to the occasion when his team needed him the most. Alas, victory escaped.

A questionable foul by Loyd put Nets forward Theo Pinson at the charity stripe, who went one-for-two. The 905 failed to answer back on offence, and the Nets converted two intentional fouls into three points, en route to a 97-90 win.

Coach Mahlalela keeps pushing his players to shoot threes. Though the 905 shot an abysmal 19% on 37 three-point attempts against the Nets, they improved the following Sunday road game against the Windy City Bulls as they shot 17-for-35 (49%) from downtown en route to a 111-91 victory, improving their season record to 3-1.