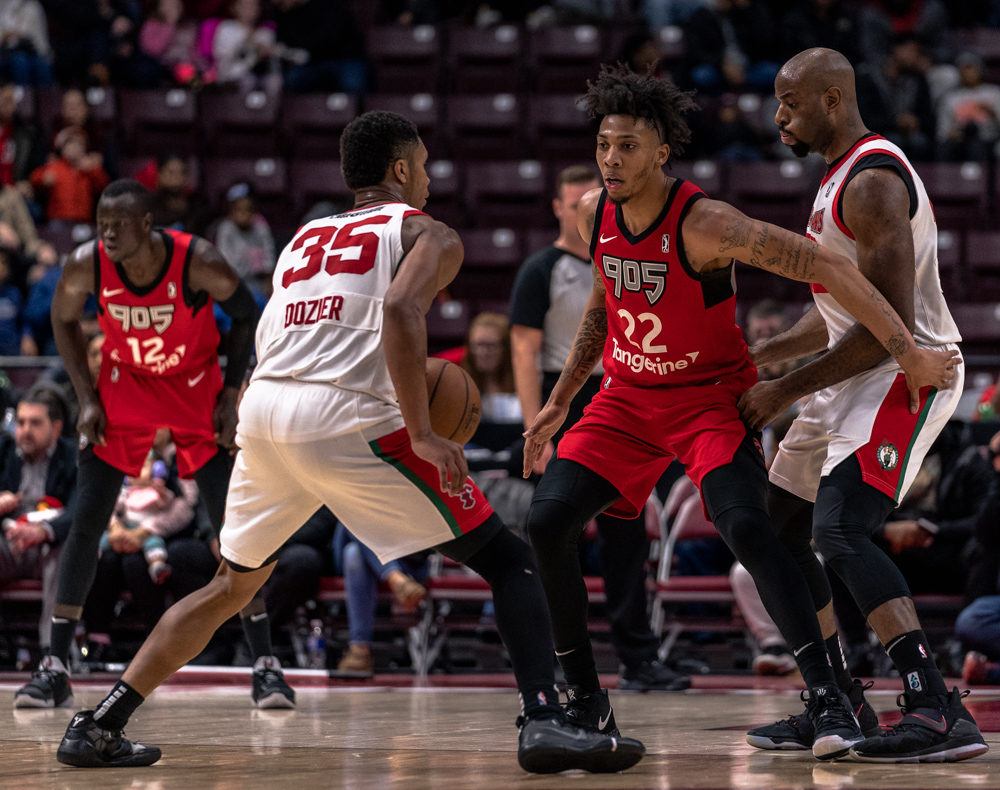 By Teru IkedaJanuary 6, 2019No Comments

(Mississauga, On) Toronto Raptors assignment player Malachi Richardson pulled up for a triple at the final buzzer. It was a last minute attempt to send the game into overtime.

The ball rimmed out and the Raptors 905 fell 113-110 to the Westchester Knicks last Friday night at Paramount Fine Foods Centre.

“It was definitely a tale of two halves,” admitted Head Coach Jama Mahlalela. “The second half was much better  — much more fight, much more ability to get in our gap to rebound, make the miss, and I’m really proud of them for that.”

“Jordan and Malachi were tremendous today,” said Mahlalela. “Just their ability to score, their ability to put the ball in the hoop is really high level. And that’s why they’re NBA prospects and NBA players.”

“Two guys really fought down the stretch. They put their head down and went to the rim. They drew fouls, got to the free throw line. Jordan got to the line a lot of times – 18 times,” continued Mahlalela, praising his two elite guards.

Even in a losing effort, Richardson and Loyd, as well as their teammates, have an opportunity to showcase their talent.

Recently, Toronto Raptors two-way player Chris Boucher was recalled to the parent team. For the Raptors 905, he is averaging 28.4 points, 11.1 rebounds and an astounding 4.5 blocks per game.

Like Boucher, both Richardson and Loyd continue to grind for a spot on the Raptors’ roster. Richardson is averaging 24.2 points per game, shooting 44.4% from the three-point range. In the third quarter against the Knicks, he displayed his offensive weaponry; completed an and-1 off a drive, went 2-for-2 from downtown and demonstrated great decision-making on a beautiful assist. Loyd was recently selected to the G League Showcase First Team and was named Player of the Week, ending December 23rd.

Richardson will be a unrestricted free agent at the end of the 2018-19 NBA season. His fourth-year option of his rookie contract was denied on October 31st.

“Every game for me is important. I want to go out there and show what I can do,” said Richardson about what he can control, despite uncertainty surrounding his future.

“My whole plan is to just go out there and play. You know, sometimes, you gotta be selfish with this business. So it’s just been my main focus to go out and play as hard as I can.”

There are still three more months left in the 2018-19 Raptors 905 season. The team will focus on being more consistent throughout all four quarters and hope to continue their winning ways in the New Year.