(MEXICO CITY, MEXICO) – The Men’s National Team fell to Venezuela 79-78 in the semifinal of the 2015 FIBA Americas Men’s Championship.

With the loss, Canada will have to wait until next summer for a chance to qualify for the 2016 Rio Olympics. The location of Olympic Qualification Tournament is to be determined. For more information about Rio qualification, click here.

Kelly Olynyk led Team Canada in the loss with 34 points on 11-13 shooting and 13 rebounds. Heissler Guillent scored 19 points with four three-pointers to lead Venezuela in the win. For full box score, click here.

Canada and Venezuela exchanged buckets early and the South American side led by two half way through the first. Olynyk was a force on offence, hitting from the post, mid-range and three-point line to score 11 points in the quarter. Venezuela broke down the perimeter defence and forced Canada into fouls. The Men’s National Team was down 20-19 after the first quarter.

The battle continued in the second. The two teams played even in the early minutes, but back-to-back threes by Andrew Wiggins and Olynyk gave Canada a 35-31 lead.  The Venezuelan squad would capitalize on turnovers and force a timeout after two transition scores. A three at the buzzer gave Venezuela a 38-37 lead at half.

With an Olympic berth on the line, both teams came out with intensity in the second half. Venezuela would establish a five-point lead off pick-and-roll offence and free throws, but Canada found their transition offence to tie it up and force a timeout with 2:50 to go in the third. Andrew Nicholson would score four straight and the Canadians held a 60-58 after three quarters.

It was back-and-forth action to start the fourth. The benchstarted the quarter, but it was Cory Joseph, Olynyk and Andrew Nicholson who would spark a run to give Canada the lead. The Men’s National Team held a seven-point advantage with 3:19 left before Venezuela made their final push. Guillent scored 10 points but Nicholson tied it at 78 with a free throw. With 24.1 seconds left, Venezuela held the ball for the final possession, missing the final shot but drawing a foul on the rebound. They made one free throw and intentionally missed the second with 0.3 seconds remaining, leaving Canada with no time to shoot. Venezuela won 79-78.

“They out-hustled us, they out-worked us. I didn’t lead my team today. I’m disappointed. It happens,” said Joseph, team captain.

The next game for Team Canada is September 12, where Canada will compete for the bronze medal. They play the loser of Mexico-Argentina at 7:00 pm ET on TSN.

Canada Basketball is a private, not-for-profit corporation committed to excellence in leading the growth of the game domestically and in pursuing medal performances on the international stage.
Courtesy Canada Basketball
****NOTE**** CANADA WILL PLAY HOST MEXICO IN THE BRONZE MEDAL GAME AT 7PM EST.
Drew Ebanks 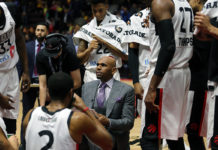