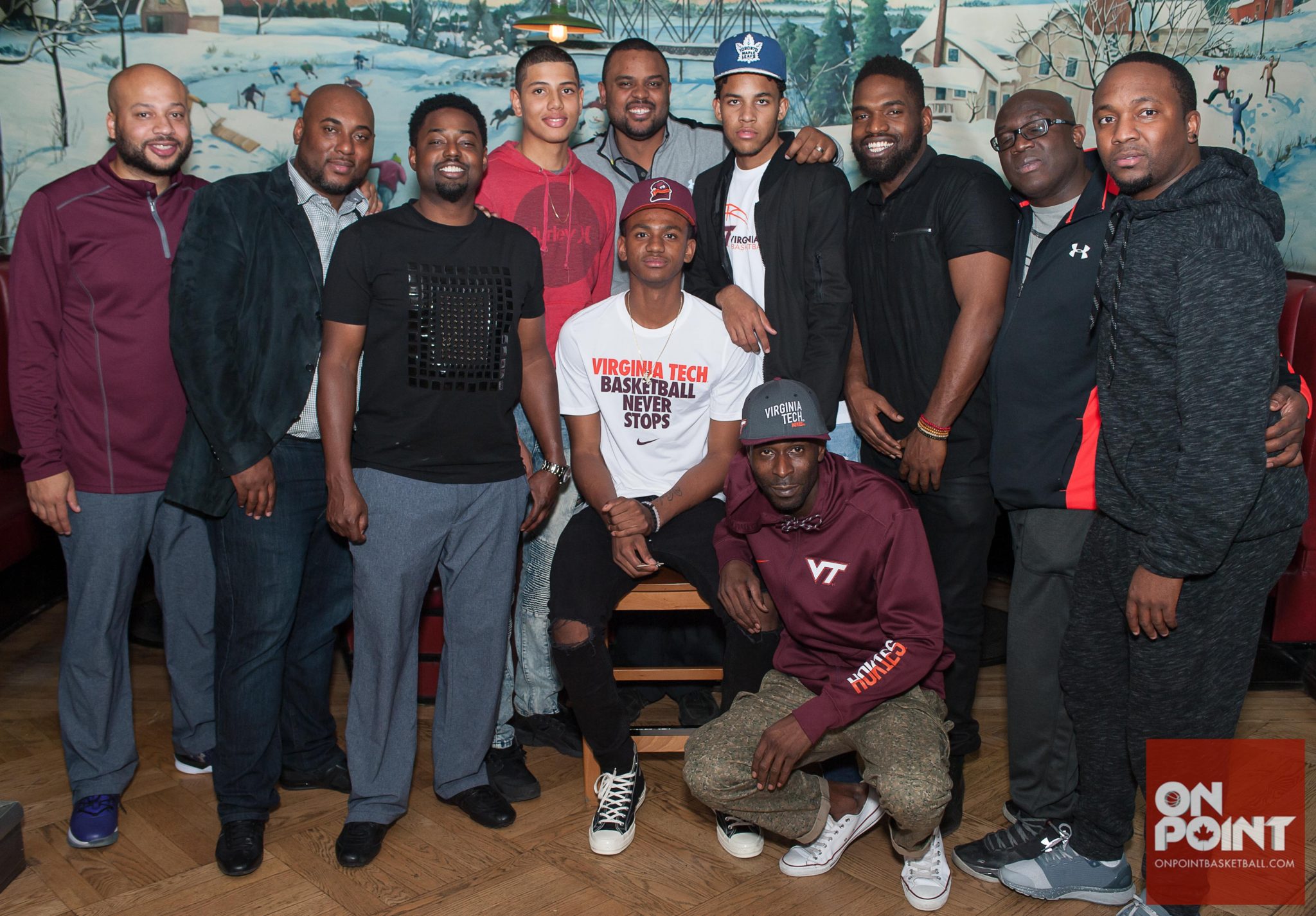 By Jaspreet GrewalNovember 26, 2016No Comments

Nickeil Alexander-Walker Signs with Virginia Tech: The Groundswell that is Canada Basketball

Written exclusively for On Point Basketball by Jas Grewal

The pipeline of Canadian talent permeating NCAA ranks continues to flow at an accelerated rate. Hamilton Heights’ (Tennessee) 4-star prospect Nickeil Alexander-Walker just recently signed his National Letter of Intent with the Virginia Tech Hokies. The 6’5 sharpshooter will work under the supreme tutelage of famed NCAA Head Coach Buzz Williams for the 2017-2018 season.

Williams previously led the Marquette Golden Eagles to five straight tournament appearances, including an elite-eight berth back in 2013, before joining the Hokies in 2014.Despite Virginia Tech’s absence from NCAA tournament play for the past nine years in a challenging ACC conference, the addition of Alexander-Walker may change the fortunes for coach Williams and Hokies nation as a whole. Alexander-Walker understands that the transition won’t be an easy one, but he’s confident that his staunch work ethic will be conducive to the growing culture that coach Williams is working so hard to integrate.

“My grit [and] my will,” said the soft-spoken Alexander-Walker in response to how he expects to impact coach Williams’ Hokies club. “My ability to bring positive energy and passion into the game. Coach Buzz is a passionate guy, I’m a passionate guy, so I feel like the two of us together can do big things and he’s going to put me in the right place and guide me in the right direction,” said Alexander-Walker ahead of his official signing with Virginia Tech.

“They’re already winning now,” alluding to Virginia Tech’s first 20-win season since 2011. “I feel like with me I can help them, especially with Wabissa Bede coming in at the point guard [spot], he can help us run also. You put us two together and that’s a scary combination in my eyes, so I feel like basketball-wise we’re getting more talent and we’ve already got the heart and the will. Once you put those two together then it’s pretty much unstoppable.”

A series of coaches can attest to Alexander-Walker’s commitment and unsullied reputation as a student of the game, even likening his dedication for basketball to that of future Hall of Famer Kobe Bryant; his grounded disposition is only a microcosm of his character as a whole.

Coaches from the Canada Elite brass became some of the first people ever to take notice to Alexander-Walker, and it was at the GTA’s basketball breeding granary, better known as HoopDome, where the discovery took place.

“My high-school coach Chris Skinner and my best friend Xavier Mclaughlin were doing a coaches clinic at HoopDome,” said Shane James who currently coaches for powerhouse Canada Elite program, among other things. “And they happened to see a men’s league game going on at the same time and Nickeil was playing with the men. So they saw this little six-foot, scrawny kid playing with men but he was competing and that was the biggest thing those guys saw in him.”

“He’s the biggest competitor that I’ve ever coached, he’s very mature for his age, he speaks exceptionally well. His understanding of the game is just phenomenal. I like to compare him to Kobe Bryant in terms of his work ethic because anything you ask him to do he tries to do it at 110%,” added coach James.

Nickeil’s family and friends in support

James wasn’t the lone-witness to Alexander-Walker’s accelerating development over the course of the years. Many different basketball aficionados including Jordan McFarlane (Canada Elite) and Gus Gymnopoulos (Head Coach at Vaughan Prep) have also endorsed the Toronto native’s innate ability to score the basketball, but more importantly, spoke highly of his unassuming character.

“I’ve known Nickeil since he was in the third or fourth grade,” said McFarlane. “Knowing him, I’ve always called him the gym rat. He’s the first one in the gym and you literally have to pull him to get him out of the gym,” laughed McFarlane when asked to describe the type of player Alexander-Walker is. “He’s always been a hard worker, whatever he tries to do, he tries to perfect it. I’m just so happy for him.”

Heading Vaughan Prep’s illustrious basketball program is Gymnopoulos who has ties to Alexander-Walker’s family, many of whom attended Vaughan Secondary in the past. His cousin Dinjiyl Walker was a star point guard for Vaughan and went on to play two years at Oklahoma University, making the NCAA Final Four last season with the Sooners. Not unlike others who spoke highly of the 6’5” shooting guard, Gymnopoulos credits Alexander-Walker’s natural skill and sheer talent for his success.

“The Walker family went to Vaughan along time ago and his mom actually called me when he was choosing a school out of grade eight,” said Gymnopoulos. “We knew who he was because of his cousins who went to Vaughan [too] and when he walked into the gym the first time, he was kind of this small, skinny kid that had big feet and big hands but he was very skilled,” he added.

“He could pass with both hands, he could shoot with both hands – which was very strange. He loved the game and you knew, when he was a kid, that when he grew into his body that he would be a special player because of his mentality and his skill, he was just so talented,” mentioned Gymnopoulos.

Alexander-Walker morphed into one of the top guards out of Canada during his time in the United States with his current team Hamilton Heights Christian Academy, affording him 29th on the ESPN top 100, a list reserved for the best high-school players in the country. The list also includes Canadians Lindell Wigginton (#49) and Christian David (#83) who both recently signed their National Letters of Intent with Iowa State and Butler University, respectively.

Executive Vice President and Assistant General Manager of Canada Basketball, Rowan Barrett, understands that this is only the start of Alexander-Walker’s long basketball career. The former Olympian is well versed in the scouting division and knows a thing or two about young prospects trying to make a name for themselves, like his son, RJ Barrett (Montverde Academy, CA), who ranks number one on ESPN’s top-25 in the United States for the class of 2019.

“I can see that he’s adding strength, this kid’s a worker,” said Barrett. “Every time I see him I see a little bit more added to his game as well. His work ethic took us aback this summer. Outside of our practice time he had his own practice routine going on, heading into the tournament this summer at the FIBA Americas.”

“It’s a simple formula, right? If you’re going to work really, really hard and be blessed with the gifts at the same time – size and skill – you’re going to have a chance to do really special things, so we’re very, very excited for him. He came off a great summer and it’s showing,” added Barrett, who shared the floor with Steve Nash as a member of the Canadian Men’s National team back in 2000 at the Sydney Olympics.

Lost in the shuffle of all of the basketball hoopla are perhaps the two most important influences in Nickeil’s life: his mother, Nicole Alexander, and his uncle, Vaughan Alexander.

Though Nicole has been the biggest supporter through her son’s long and laborious basketball journey, it would be unfair to disregard the impact and guidance that uncle Vaughan has provided Nickeil since the day he was born. Uncle Vaughan is, unequivocally, the most passionate and candid person around the Alexander family, and it shows through his words.

“Nickeil’s always been a kid from the early ages that displayed gifts from God, I would call it,” said Vaughan. “Being able to deal with basketball is easy for him, it’s never been a struggle. From when he was a young kid on the Fisher-Price net, I saw him [shooting] with his right hand but he was also shooting with his left hand and hit them the same way. I said ‘wow, this is not normal,” added Vaughan.

“But for me, free education is a big thing. Not every body gets to go to a top University and get free education and build themselves for the future,” mentioned Vaughan. “That’s what we’re trying to do. People always mention the NBA and say, ‘this kid’s really good and he could get to the NBA,’ but I take that stuff in stride. I don’t look at him and say, ‘he’s got to make it to the NBA,’ no, I look at it like, ‘he’s got to be a good person in life,’ because that’s what builds you, not money, not your skill,” said Vaughan.

It was clear to see that Alexander-Walker’s close-knit family is what made him who he is today. So long as he continues to surround himself with good influences and sustains his commitment to basketball, there is essentially no ceiling to what the Toronto native can achieve in life and on the court.