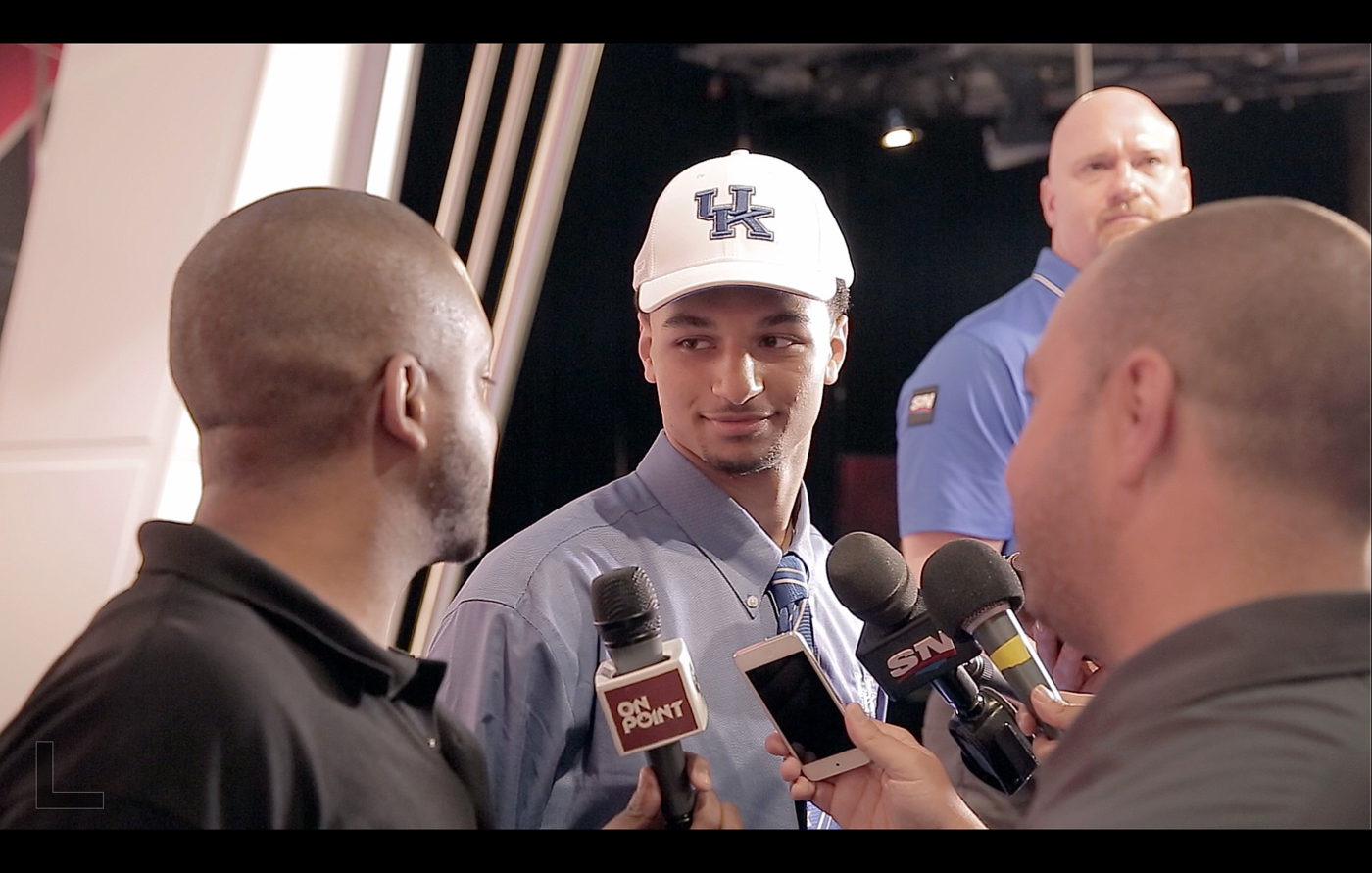 On Point Leading Up to the NBA Draft: Jamal Murray

Home » On Point Blog » On Point Leading Up to the NBA Draft: Jamal Murray

Leading Up to the NBA Draft: Jamal Murray

Special to On Point Basketball by Jas Grewal

NBA draft lottery day is an exceptionally angst-ridden moment for front office personnel and fans altogether. For teams with a fair probability of landing a decent-to-good lottery pick, there lingers a sense of immediate apprehension – a fear that, despite it being a lottery and despite having somewhat of a chance of securing a desirable pick, the possibility of landing one that corresponds to your organization’s ideology may not always go as planned.

From the outlook of a prospect, conversely, there are only certain things that are truly controllable once declared for the NBA draft. Who chooses you or where you are selected in the draft is typically based on how talented you are, your fit to an organization’s immediate needs, how well you have performed on a competitive level (college, international pro leagues) and, in most cases, how well you do in work-outs at the NBA draft combine. Generally, all of the above factors together will determine your overall rank.

What seems to get overshadowed and almost shunted aside by all of the important basketball generally is the backstory of these players and the moments leading up to the draft.

For Canadian and Kentucky Wildcat alum Jamal Murray, the NBA has always been a prevailing theme during his upbringing in Kitchener, Ontario.

“I‘ve had this dream from when I was a young kid,” said Murray back in April during the 2016 Biosteel All-Canadian Game, an event where the 6’5” guard took home MVP honours only a year prior. “We always talked about it and talked about how good I could be. Now I’m just going through it. I’ve put in the work, I’ve put in the effort so now it’s paying off.”

After coming off a phenomenal freshman year at Kentucky where the Kitchener native led his club in scoring (20 ppg) and took home Third-team All-American – AP, First-team All-SEC and SEC All-Freshman team honours under esteemed coach John Calipari, the 19 year old is looking to try his hands at the next level: an understandable and indisputably sound decision based on the momentous year he had with the Wildcats.

“When I was declaring for the draft, me and my dad had a moment where we were just thinking about how far we’ve come. It’s been a long journey so we’re just trying to enjoy every minute of it,” mentioned Murray. “It’s been my dream, it’s what I’ve been working for all my life. It’s been for a while now, that’s the one thing. I used to have dreams about it, tell my family about it. It’s something I’ve been working for and I’m just trying to enjoy it.”

There’s no refuting the fact that coach Calipari is world-renowned for his ability to prepare players for the next level, and Murray, who surprised a lot of scouts this past year with his immediate impact, has unquestionably benefited from Calipari’s wisdom and overall coaching prowess.

“[UK] expanded my game,” said the former Orangeville Prep product. “Playing the two guard, playing off the ball, moving without the ball. It was a whole different perspective and different position. It was fun, I learned a lot and I grew as a player.”

“He’s very international,” smiled Murray in reference to coach Cal. “We had an Australian, a Haitian, New Zealand, Canada – so we had a really international team. I think he’s just looking for talent overall and trying to build together different teams and different groups.”

According to NBAdraft.net, Murray is projected to go 5th overall in the upcoming NBA draft- an opportunity to potentially share the hardwood with fellow Canadian and former Rookie of the Year Andrew Wiggins in Minnesota.

However, it’s not only Murray who will partake in the NBA draft hoopla, but also former high-school teammate and good friend Thon Maker. Maker, who elected to opt for the NBA draft after a successful fifth year at Orangeville Prep, is no stranger to the limelight. And Murray has no queries about Maker’s decision to pursue the NBA, but rather sheer support and encouragement for the 7’1 Sudanese-Australian native.

“He’s a 7 footer that can handle the rock and run the floor just like a guard. He’s a shooter, he’s very versatile. He’ll do great in the workouts and everything, we’ll just wait and see where he goes.”

Although Maker is not necessarily Canadian by law, he and Murray will more than likely prolong the lineage of Canadian basketball talent permeating the NBA ranks. The Kitchener native understands that he’s a role model to many young kids in Canada and he’s more than willing to embrace the responsibility. When asked what kind of advice he would give to aspiring Canadians looking to take their basketball careers to the next level, Murray responded with an extremely mature and cerebral answer.

Who is drafted can mean a world of difference in determining the direction, success and progressive longevity of an organization. And there’s no doubt that Murray is respectably on the list of players who can immensely change the fortune of an NBA franchise.