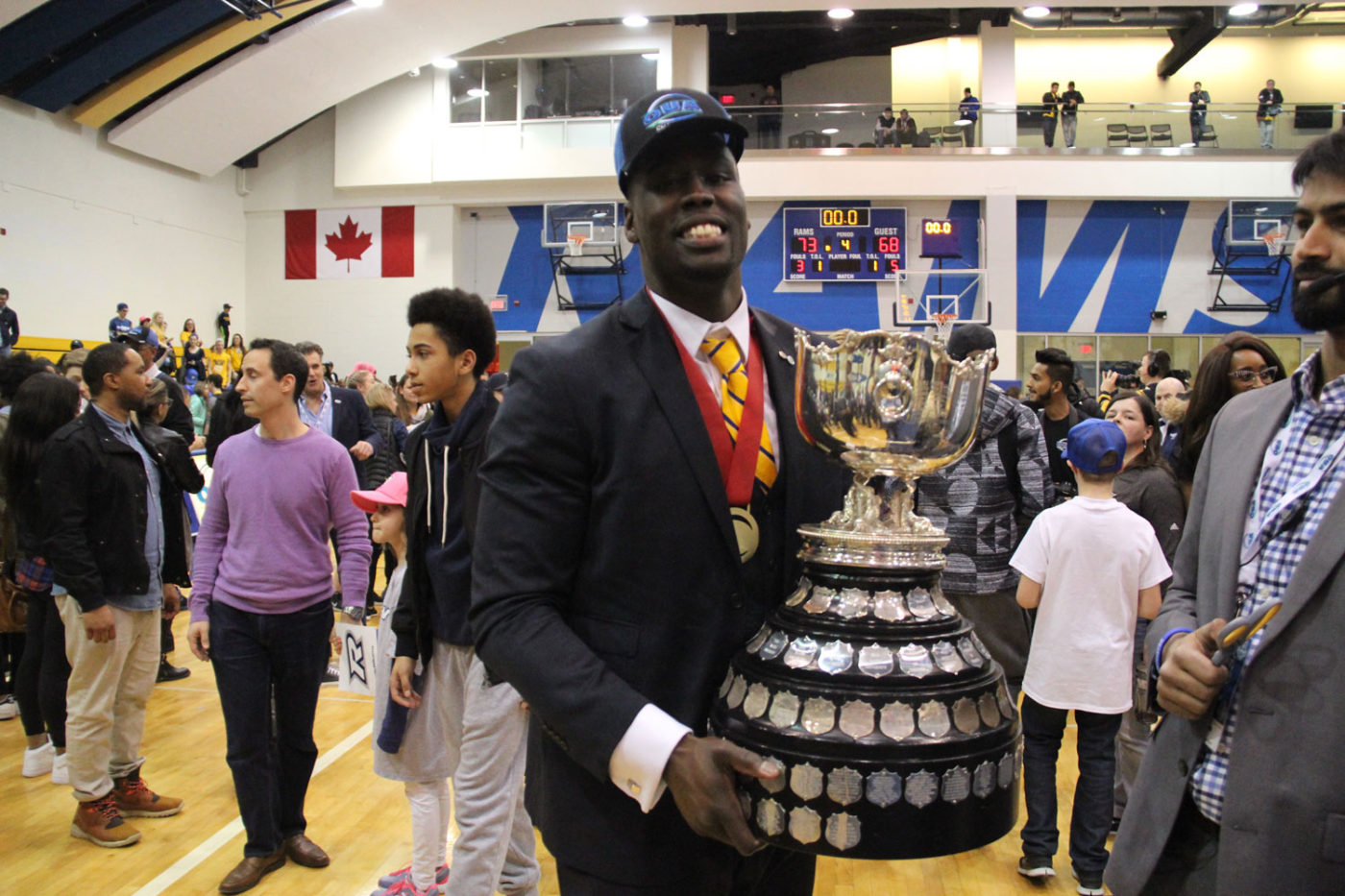 On Point Q & A: Patrick Tatham on his way to the Maine Red Claws

Home » On Point Blog » On Point Q & A: Patrick Tatham on his way to the Maine Red Claws

Special to On Point Basketball by Bryan Meler

If any Canadian coach is building his way up the ranks, it’s Patrick Tatham.

After an historic year as the interim head coach of the Ryerson University men’s basketball program, coach Patrick Tatham has decided to join the Maine Red Claws, an NBA D-League affiliate of the Boston Celtics. The recipient of both the OUA and CIS Coach of the Year award, Tatham was able to lead Ryerson to their second consecutive CIS bronze medal last year, while tying a program best 17-2 record.

Tatham will be leaving his position as an associate coach with the Rams after 6 seasons, to take on the same role with the Red Claws. Before joining Ryerson, Tatham became involved in Canada Basketball, was a student athlete for the Vikings at Cleveland State University, and also spent time playing professional basketball overseas in places like Switzerland and Syria.

Known most for his up-tempo offence and his ability to relate to players, Tatham has become one of Canada’s most well rounded contributors – even dating back to 2002 when he won Mr. Basketball Canada. Tatham’s next step in Maine will give him his first shot in the D-League, a well earned opportunity that will continue to help the

32-year-old’s journey to be a coach in the NBA.

Q: Last season you won CIS Coach of the Year, but over the summer it remained unknown what your next step would be with coach Rana coming back. Your decision to join the Maine Red Claws, did you have a lot of time to think about it?

Not really, they kind of reached out in May, early June, and I wasn’t really sure because I didn’t want to give up my position at Ryerson. But I knew I wanted to continue to learn, develop and continue growing as a coach. I thought this past year I did a good job of learning and growing on the fly as a interim head coach, so I really just to wanted to continue to grow. As soon as they reached out to me in June, I was just really excited, but I didn’t know exactly what was going to happen. It was just recently that everything firmed up in late August, and now I’m just trilled to get an opportunity to learn at a higher level.

Q: Learning on the fly, what were some moments and opportunities that stand out last season when it comes to helping you grow as a coach?

I got a wake up call right off the bat, with the first home game of the season against U of T – a cross town rival. I thought that for sure we might lose, since we only had 9 seconds on the clock and we were down by one, and also U of T had the ball. But we ended up winning that game by one, and I was so thankful. But at the same time I noticed I had to wake up and actually get after things. I started to put my coaching hat on, and put my head down in the sand to be able to just work my butt off. It was a great learning experience to kick the season off.

Of course the Final 4 at Ryerson was also great because of the atmosphere. I don’t think we were ever in that type of position where we could win an OUA Championship in our school history. But me

and the guys we just really wanted to make some sort of history. I’m thankful for that moment as well. And obviously nationals, back-to-back years, coming back and winning against B.C. on UBC’s court

and just really going back to the bronze medal game. All those little moments were great moments for me, and great learning moments as well. I’m pretty sure there are plenty more, but those are my major three.

Q: You spoke about the success that you and the Ryerson men’s basketball program had last season. Did it make your decision to go to the D-League easier or harder?

It made it somewhat hard, because the guys that were on that team have a special place in my heart. Of course the team is new this year, but there are still 5 or 6 guys from last year’s team whom I’m still fairly close with. It was just going to be a different dynamic this year, and I felt like it was going to be this year or next year that I go off and learn at a higher level. They’ve been very understanding, and each

and every single one of them congratulated me and was happy for me. I supposed it was a little bittersweet, but nonetheless I think it was a decent move. Time will tell.

Q: You spent a large part of your career at Ryerson, and you mentioned the relationships you were able to develop with the players. How do you think that will help you in this next step you’re taking in your career?

I think it’s really just about your work ethic, it’s your work ethic that will really help you propel yourself to the next level or whatever level you’re at. The relationship I had with the guys is really no different than having relationships with pro players. I think basketball is all the same, whether the college level or the pro level. It’s all the same game to me. But the relationships that you have with people are going to change what you do mentally. I don’t think there’s too much change when it comes to relationship building, it’s just about being loyal and trustworthy.

Q: You’re now joining head coach Scott Morrison of the Maine Red Claws, who just like coach Rana and yourself is part of Canada Basketball. What type of relationship do you have with him, and also what type of coach is he?

Coach Morrison is a great coach. He turned the program around in Thunder Bay, at Lakehead, and was at one point ranked number one in the country, maybe number two until we knocked them off in my first year in the OUA  at the Final 4. At that time I was actually a manager for the junior national team with coach Rana, and coach Morrison was an assistant coach. I met him at that time, and we went to Brazil with a great, great group of kids in Wiggins, Rathan-Mayes, Ennis and I just kind of clicked with coach Morrison at that time. From 2012 to now we’ve been fairly close, like I would go to training camp and meet with him to say “hi”, send him a text.

Of course he also won Coach of the Year in his second year with the Red Claws, so I don’t think I would need to describe what type of coach he is. If you look at his resume, it’s a really good one, filled with essentially just winning. I’m sure there’s also a ton of great relationships in there, like the one I have with him. I’m definitely excited to work with him, and learn as much as I can.

Q: The Red Claws, they’ve been really successful as of late with back-to-back 30 win seasons. What do you think you’ll be adding to that team as they look forward to another successful season ahead?

I’m just going to continue to bring my energy and my enthusiasm, which I bring to whatever job I go to. Obviously, also some hard work. I’ll definitely be an extra set of eyes for defence. I think they’re already set offensively, especially with the offensive genius leading the entire organization in Brad Stevens. So I think if there are a few things that we can do differently on defence, that I could hopefully propose something, and maybe that might change 30 wins to 40 wins. I’m just hoping to get in there, work hard, and just make numerous suggestions on defence.

Q: There seems to be a good collection of Canadian talent now in Maine. You’ve spent a lot of time in Toronto, even at places like the Crown League this summer, but now that you’re leaving; how has basketball in Canada evolved since the first days you started as an assistant coach at Ryerson until now?

It’s improved immensely, it’s sort of unreal. Just even seeing the Crown League, it’s special to just to even have something like that in the city. Then there’s also the OVO Bounce tournament, which brings a lot of pros out, and creates this huge buzz in the city. It’s great. It’s amazing to also watch our cadet boys and our junior boys, and to see that Canada basketball has a Junior Academy that is taking all the right steps towards really making basketball a hotbed in Toronto. I’m just excited and thrilled for it, and hopefully I can leave my mark somewhere down the line. But for the time being, I’m just happy to be part of it.