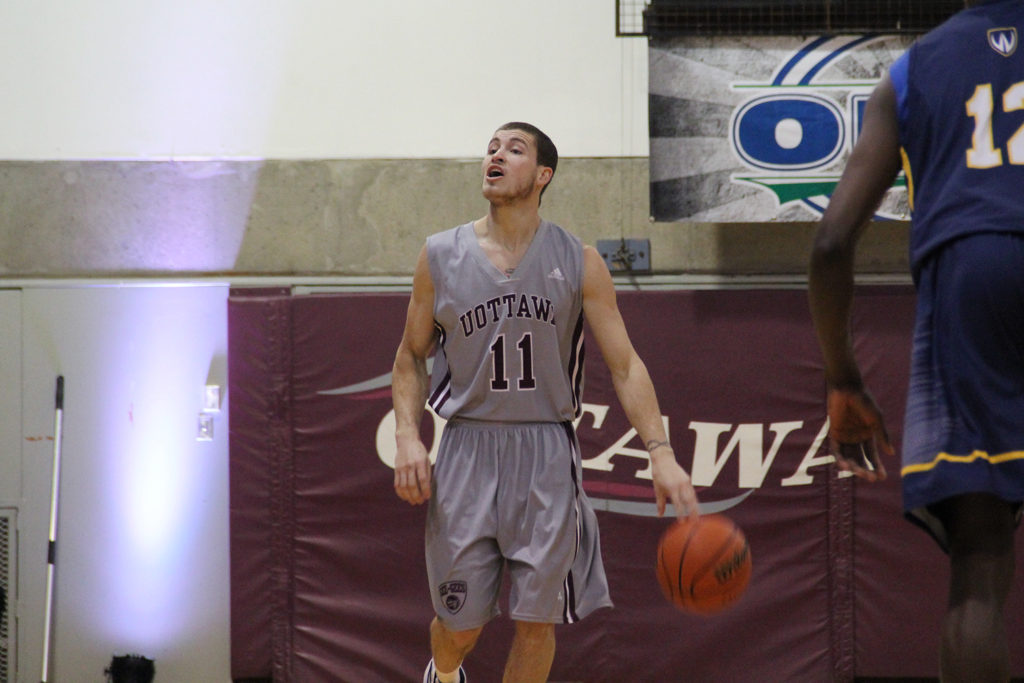 By Charles Vanegas for On Point Basketball

Averaging 20.4 points (OUA-5th), 5.3 assists (3rd) and 1.9 steals (T-6th) per game, L’Africain led the Gee-Gees to a 17-2 record and a second straight North division title – despite having had fellow all-star Caleb Agada limited to just 14 games due to injury.

“My whole career, I’ve never been an all-star before. I’ve always felt like maybe I’d get something, and then I never get it, so I was more shocked that other people recognized me,” said L’Africain. “I went from nothing to getting that award, so it’s pretty cool.”

Not only was the Gee-Gees captain efficient – shooting 41.8% (5th) from beyond the arc and 85.9% (3rd) at the free-throw line – he was prolific, leading the Gee-Gees to several big game victories, including a 75-73 come-from-behind win over Carleton at the Raven’s Nest, in which he scored 17 points with five stitches in his shooting hand (after slicing it open 18 hours before the game).

“It was painful. Every dribble it was bleeding, throbbing. That was tough one… [but] I don’t sit out. My coach knows I’ll play through that.”

A bum ankle couldn’t keep Agada (Burlington, Ont.) from collecting hardware, as his 2.7 steals (3rd) and 8.6 rebounds (OUA-3rd) were enough to earn the fourth-year guard Defensive Player of the Year – ending Carleton’s seven-year run of having a player earn that distinction. (Note: Prior to last season, when the OUA split into four divisions from two, DPoY and PoY were named for the East and West divisions.)

Ryerson interim head coach Patrick Tatham was named Coach of the Year after leading the Ryerson Rams to a 17-2 record and second straight OUA East division title after taking the reins from Roy Rana, who is taking a yearlong leave of absence.

“I was very grateful that he was trusting enough to leave me with the team. I tried to tell him that it was probably even better than last year’s team [that took bronze at nationals], and he said ‘well, you’re going to have to lead the ship this year.’ A lot of thanks goes out to Roy,” said Tatham, who was on Rana’s staff for five seasons prior to his interim appointment. “It’s been crazy. It’s been fun. It’s been a lot of learning. But it’s been so, so sweet.”

Tatham noted he was one of three head coaches at this week’s OUA Final Four who was filling in for a long-time successful coach, alongside Windsor’s Ryan Steer (filling in for Chris Oliver) and Carleton’s Rob Smart (filling in for his brother, Dave Smart), and gave credit to the players – especially incoming transfers – for believing in him as their coach.

“It’s always a little nerve-racking when you’re taking over as a new head coach. … I think you want continue to build off on the success of the coach taking the year off. It was definitely a bit of a worry for me, but the guys bought in and trusted me.”

The Wilson Cup will be played at Ryerson’s Mattamy Athletic Centre, but unlike the 2013 and ’14 OUA Final Fours and 2015 CIS Championship, the games will be played on Coca-Cola Court on the 2nd floor rather than moving up to the arena on the 3rd floor, which can accommodate more spectators.

“Based on us playing Ottawa, Carleton, Brock on the Coca-Cola Court – the [tight] atmosphere was amazing. …If you really break it down, Carleton, Ottawa and Windsor might have played as many games on the ice [having all appeared in all three of the aforementioned championships] or just as many as we have,” said Tatham. “We had a lot of comfort playing downstairs and I think it’s a little more of an advantage for us rather than playing with a different set up.”