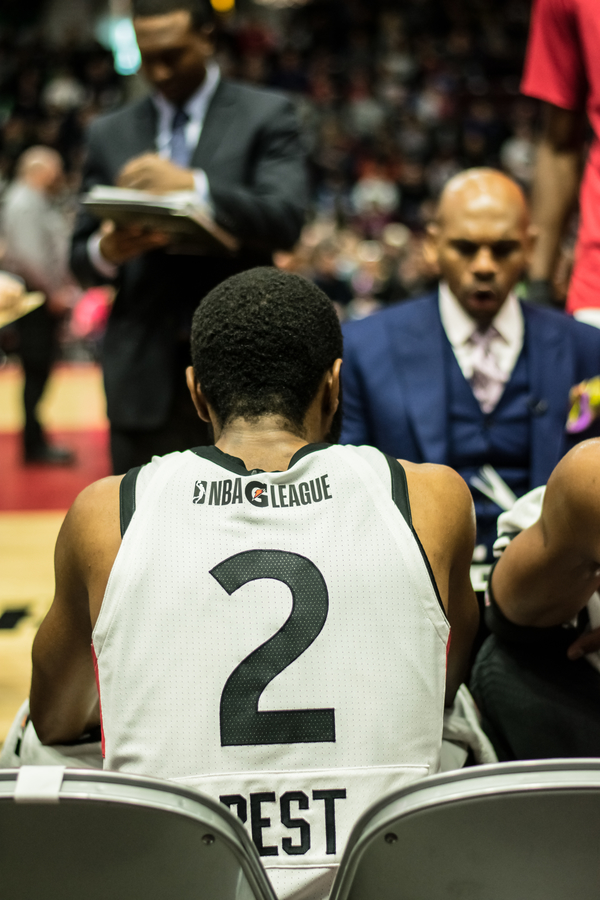 Unlike the Raptors 905 offensive explosion in the previous game against the Windy City Bulls, the Mississauga area team’s matchup against the Austin Spurs was a slow-it-down defensive showdown.

But like the win over the Bulls, the result was the same.

“We depend on our defense to keep us in games, especially when we’re not making shots,” head coach Jerry Stackhouse said. “It was the pace that we wanted. To hold this team that has a lot of capable scorers to under 80 points, we really did a defensive number.”

“We just have to find a way. We’re not going to shoot the ball well every night,” Brown said. “We take pride and focus on the defensive end.”

Shevon Thompson once again made a huge impact off of the bench, finishing with a double-double, with 16 points and 10 rebounds.

“Shevon was big for us. He’s a guy that we throw it to in the post and he’s gotten much better at looking for his teammates,” Stackhouse said. “Sometimes, he’s observing a little too much where we want him to go to work a little bit sooner. But I can appreciate from where he started to now, making his teammates better, and protecting the rim for us on the defensive end.”

Kennedy Meeks also notched a double-double as well, finishing with 13 points and 13 rebounds.

“We try to compete every night. He keeps me going, I keep him going,” Thompson said about the job that he and Meeks do in the paint. “We motivate each other and get ready to play.”

“It was big. We needed every game like that out of them,” Brown said. “They’ve been bringing that so far. Hopefully they keep it up.”

Austin was led by forward Jaron Blossomgame, who had 18 points while Darrun Hilliard had 16 points, eight rebounds, and six assists in the loss.

Olivier Hanlan, a Canadian native from Aylmer, Quebec, scored seven points but was two of 11 from the field, as he was hampered by early foul trouble.

Things got chippy this game as five technical fouls were handed out. Spurs guard Jeff Ledbetter was ejected after his second technical.

Brown and Bruno Caboclo got it going early on, scoring six points each, and held Austin to 40.9 per cent shooting in the quarter. But four offensive rebounds and four triples in the quarter from the Spurs had them up 22-19 after one. A skirmish occurred in the quarter in which Ledbetter and Aaron Best received a tech.

In the second quarter, Austin threatened to pull away as a jumper from Hilliard gave them a 32-26 lead. But Malcolm Miller then made four out of six free throws, including a sequence in which he was fouled hard by Nick Costello on a dunk attempt. That and the foul trouble from Costello and Hanlan, sparked 10 straight points, including consecutive post scores from Thompson to give the 905 the lead for good.  Amida Brimah was then hit with a technical and another skirmish, this time between Caboclo and Ledbetter led to double technicals, resulted in the Spurs guard’s ejection.

The third quarter saw the 905 slowly build up their lead to double digits. A 16-7 run from the Raptors, lead by five points from Meeks, gave the team a 61-47 lead before eventually going into the fourth quarter, up 67-55. Brown had four assists in the quarter alone.

Austin cut the 905 lead to nine after a triple from Hanlan but the Raptors used a 14-6 run to put the game out of reach for the Spurs as they cruised to their season best sixth straight victory. Thompson was an animal in the quarter, scoring eight points and grabbing seven rebounds.

However, it will be a quick turnaround for the 905 as they begin 2018 with a home game on Jan. 2 against the Lakeland Magic. In their last meeting, Lakeland dominated, winning 114-96.

“We keep doing what we’re doing,” Brown said. “Nothing different needs to be done; just come out with the right mindset on offense and defense.”

Thompson was traded to the 905 from the Magic, whom he didn’t play for this season before that. He says that the team had to be ready on Tuesday night.

“Everybody’s got to stay locked in and focused,” Thompson said.