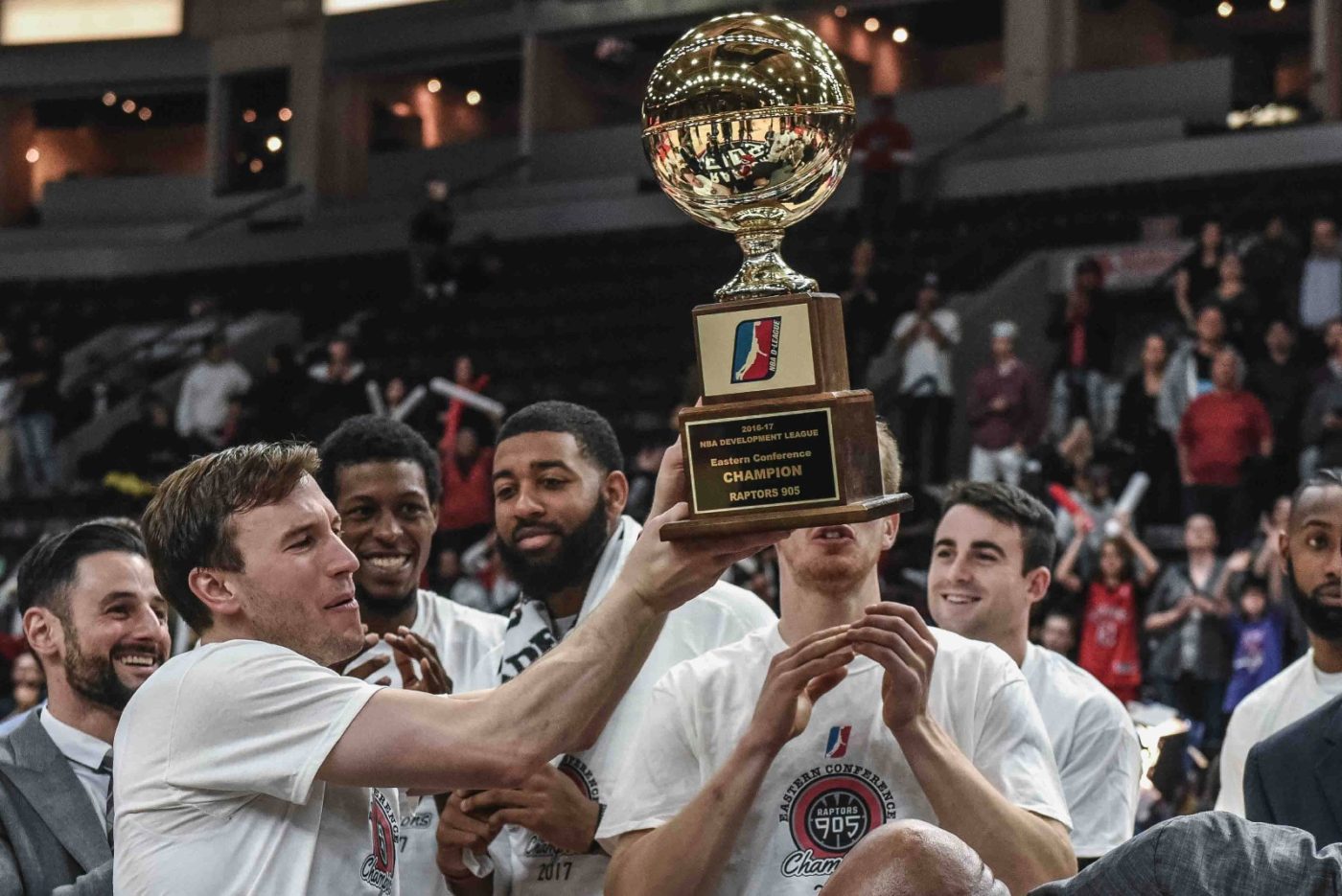 By Kajan ThiruthanikasalamApril 21, 2017No Comments

The 905 punched their ticket into the NBA D-League Finals with a 103-88 victory at the Hershey Centre over the Maine Red Claws, winning the series 2-0.

A 21-2 run to end the second quarter proved to be the deciding factor for the 905. It was also the first time that the home team won a game in the head-to-head matchup between the two teams this season.

Despite losing star players Axel Toupane (New Orleans) and Edy Tavares (Cleveland) to NBA call-ups, the 905 did not miss a beat.

Raptors 905 head coach Jerry Stackhouse was awarded the 2016-17 NBA D-League Coach of the Year before the game. But he made sure to give credit to the people behind the scenes.

“It’s not just what happens in practice with this group,” Stackhouse said. “Our player development and our coaches, they’re all a part of what we do. I got real grinders.”

The coach of the year singled out his assistant coaches, saying, “Nathaniel Mitchell, David Gale, Nicki Gross, John (Corbacio), Donnie (Tyndall). They come in every morning at eight o’clock, up for a large part of the season, and have player development before we even have practice.”

Six players scored in double figures for the 905. Brady Heslip led the 905 with 21 points on six made threes. E.J. Singler had 18 points and a team high five assists while Bruno Caboclo scored 16 and John Jordan chipped in with 12. Singler also finished with a game high +33 when he was on the floor.

Pascal Siakam (15 points, 10 rebounds) and Yanick Moreira (16 points, 12 rebounds) each had a double-double. Siakam also had a game-high three steals in the victory.

Maine point guard Demetrius Jackson had 21 points in the loss.

When asked if his scoring outburst reminded him of his days at Baylor, Heslip laughed, saying, “These are different days, man.”

The 905 forced the Red Claws into just 23.5 per cent shooting from the field and into five turnovers.

In the second, the Red Claws chipped away at the 905 lead, cutting the lead to one at 35-34. A notable highlight came from Jackson, who soared over Siakam for the poster.

However, this was when the game turned around, in a big way. The 905 closed out the half on a scintillating 21-2 run, led by Heslip.

Heslip had 15 in the quarter on five made threes, including four straight triples to end the half.

“Once I saw one go down, I was looking for it and usually, the ball finds energy,” Heslip said. “(My) teammates did a really great job finding me when I was open and I was able to get a few shots off.”

Singler and Caboclo were the other Raptors in double figure scoring with 11 and 10, respectively, at halftime.

The third quarter saw Maine cut six points off of the 905 lead to 14. Jackson had seven points in the quarter but Singler scored five in the third to make sure Maine stayed at arm’s length.

The final quarter saw both teams play even to each other as Moreira had eight points and five rebounds in the frame alone. Both teams then emptied their benches to close out the game.

Maine forward Abdel Nader was held to just 15 points on just 30 per cent (6-20) from the field while forward Jalen Jones was limited to just 11 points.

“Bruno (Caboclo), Antwaine Wiggins, CJ Leslie, Pascal Siakam,” Stackhouse said, listing the defenders that shut down Nader. “That was the game plan, for them to match up and make him work for all of his baskets.”

Caboclo, who was aggressive on both ends of the floor, said that he was encouraged by Stackhouse to play more freely.

“Stack told me to get more into the ball and pressure more of the ball,” Caboclo said.

Although the win was historic for the 905, Caboclo is not satisfied with just a finals appearance.

“Nothing is done yet,” Caboclo said. “We want the championship.”

After the Rio Grande Valley Vipers won Game 3 of the Western Conference Finals against the Oklahoma City Blue as well on Wednesday night, the 905 will now play the Vipers to determine the NBA D-League champion.

The Vipers feature former Gonzaga Bulldog Kyle WIltjer, who has suited up for Canada internationally.

Game 1 will be on Sunday April 23rd at 8pm at the State Farm Arena at Hidalgo, Texas.