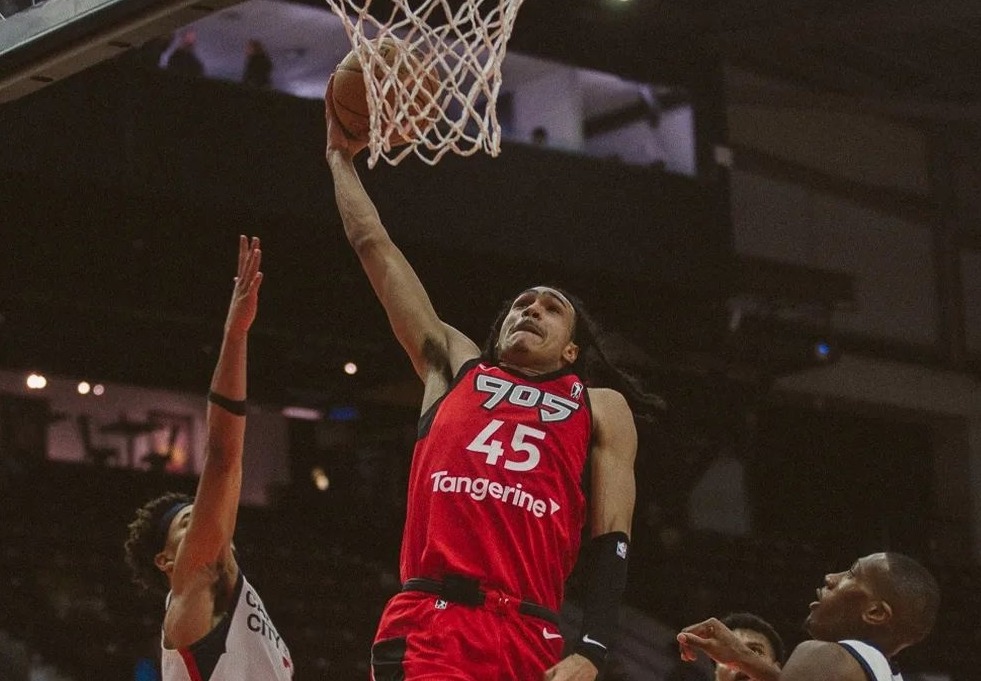 The Raptors 905 snapped a 3-game skid with a 122-119 victory over the Capital City Go-Go in their first home game of the new year. The 905 improved to 2-3 while the Go-Go was handed their first loss of the regular season, falling to 5-1.

Second-year pro Dalano Banton was pivotal in the clutch, scoring 11 of his game-high 29 points in the final four minutes and three seconds of the game. In that time, he made two threes, three free throws, secured monster rebounds on each end of the floor, and brought Paramount Fine Foods Centre to its feet with an emphatic dunk. He tallied seven rebounds and two assists in total.

Leading Capital City was opposing big man Vernon Carey Jr. who wreaked havoc in the paint, scoring all 25 of his points inside. He flirted with a triple-double with a game-high of 12 rebounds and eight assists, making a variety of plays for his teammates from the elbows. As a team, Capital City racked up a whopping 82 paint points — 32 more than the 905.

“They have got a lot of guards who are unbelievable at getting downhill,” said 905 head coach Eric Khoury. “We tried to keep them out of the paint, and they still had, what, 82 points in the paint? Add up the 14 points from the free throw line, that’s 96 points from attacking the rim. That’s something that we’re definitely going to have to fix for tomorrow.”

The Go-Go’s Jordan Schakel continues to have himself a season, once again leading the Go-Go in three-pointers made with four tonight. He continues to build on his team record with 122 made threes on the season. The crafty guard also flashed an impressive layup package, demonstrating an ability to finish creatively at various speeds and coverages. He shot an efficient 53.8 percent from the field for 22 points.

New additions in Joe Wieskamp and Kylor Kelley made their 905 debuts Monday night. Wieskamp, who spent the past couple months playing for the NBA G-League’s Wisconsin Herd, was signed by the Toronto Raptors on a 10-day contract as the club searches for fresh shooting talent to fill the void left by the recently waived Justin Champagnie. He averaged 17 points and 16 rebounds in 29.4 minutes across 13 games with the Herd this season.

Wieskamp started in place of big man Reggie Perry, who leads the team in rebounding and is second in scoring. The 6’6” wing from Iowa made his presence known, making four-of-six triples to lead the 905 from distance. The sharpshooter finished the game with an efficient 19 points on just nine shots along with seven rebounds.

“Three-point shooting is the reason I’m here, so I’m just going to continue to do that and try to do it at a high level,” said Wieskamp postgame. “Knock down shots when I’m open, but also be able to make tough ones because they know I can shoot so they’re going to be up into my space and force me to take some tough ones.”

“Joe was awesome,” said Khoury. “He was a force on the glass. He led our team in rebounding. “He was going after every ball, he’s got a nose for the ball, he picked up our defensive schemes right away. On the offensive end of the court, he comes flying off screens, they got to trail him, he’s able to turn the corner, get And 1s. [If] they’re late a bit, he can rise up and knock it down. Heck of a player.”

In addition to his shooting and rebounding, Wieskamp showed proficiency in finishing at the rim when given a head of steam, although he doesn’t appear to have the ball handling skills or first step to dribble penetrate reliably himself.

The team expects Wieskamp to be called up by the Toronto Raptors on Tuesday and is therefore unlikely to be available for the second leg of the back-to-back against the Go-Go.

Kelley is a 7’0” center from Oregon State who most recently played professionally in Denmark and was with the NBA G-League’s Austin Spurs at the beginning of this season, but never suited up for them. He saw limited action in the game and finished with just two points and zero rebounds in 11 minutes.

Although Perry curiously came off the bench in this matchup, he played the lion’s share of the 905’s minutes at center and closed the game while playing his usual role. He characteristically had 21 points, six rebounds, and two blocks. Perry has scored over 20 points in four of his last six games.

Overall, it was a good team win for the 905 which had six players in double-digits in scoring. Ron Harper Jr. contributed 17 points, 5 rebounds, and two blocks while his backcourt mate, Saben Lee, chipped in 12 points, eight assists, and five steals (though he had five turnovers himself).

Jeff Dowtin Jr. had a strong all-around game with 13 points, four rebounds, five assists, and three steals. He particularly shined in the second quarter, where he swiped two steals with each directly leading to Banton scoring a bucket in transition.

The 905 will have a rematch against the Go-Go Tuesday night at Paramount Fine Foods Centre. Game time is 7:30pm est.