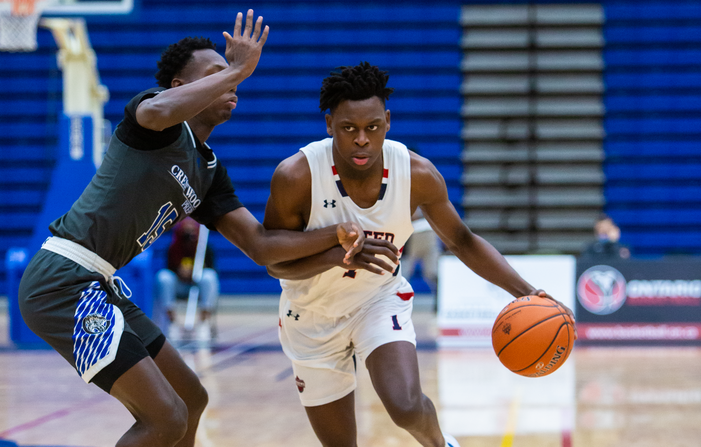 On Point Scouting (OPS) is proud to launch the Recruiting Roundup, a regular feature examining the recruitment and commitment landscape. With the High School season concluded, 2022 uncommitted HS prospects turn their eyes towards their college future. This will be the focus of the feature over the next few days.

Today, we take a look at Ose Okojie, a 2-way wing listed at 6’7. He spent his last High School year with United Scholastic Academy (USA) and concluded a great regular season with a loss to Fort Erie International Academy (FEIA) in the OSBA Finals. Nonetheless, Okojie stood out with his 1 on 1 defense when matched up against top prospect Leonard Miller (2022). The intensity and positioning with which Okojie defended Miller stood out to OPS.

“He has worked so hard and tirelessly every day. When he became a novice, that’s when he started training like a pro. Truly, him and his brother (Baraka, class of 2024) are disciplined in their approach” says Ojie Okojie, father of Ose when asked his work ethic.

Okojie currently holds an offer from Howard University. “It’s a high academic school in a great location. We love their style of play and have talked to coach Kenneth several times. We continue to build a relationship with him and his coaching staff.” says his father.

College Interests have also continued to roll in. They include Maryland, which his father calls “a tough defensive team that fits the 2-way impact of my son”, Youngstown, VCU, TCU, Wake Forest and Georgetown. The fit between and player and program will obviously be key

“The style of play for him is one the team’s offence is complimented by its defense. He is a 2-way player that can play 1-5 positions offensively as well as guard multiple positions. He is very competitive and loves to win. He doesn’t give up regardless of the circumstances.”

OPS spoke with him after the recent North Pole Hoops Combine on March 16th. He shares his impressions on the camp and gives an update on his current recruiting situation

OPS: Here we are at the NPH showcase camp #GameSpeaks. Tell us your impressions.

OO: In my mind, I think the camp was very fun. I’ve seen a lot of guys that I’ve played against through all the years in Canada. We all know each other; hence the competition level was really high. It made for a great combine with a lot of intensity and a lot of guys going at each other.

OPS: What is it about this camp that created that type of atmosphere?

OO: I think it’s just the history between all of us as we’ve been playing against each other for a long time, some since the 6th grade. Now that we are looking to get to the next level (college), it’s good to have that little chip on your shoulder, fighting to find out who’s the best amongst all of us in a camp setting.

OPS: You’re coming on towards the end of your high school career. When you look back on it, when you sort through your time and accomplishments, what’s your biggest takeaway from your experience?

OO: To never give up. I had a lot of people doubting me and putting me down. Truly, to never give up is my main lesson from my time in high school.

OPS: In your high school time, you went through something that’s never happened before, which is a pandemic. How did you take that hardship and turn it into a positive for yourself?

OO: Well, the pandemic cut off my 16U (grade 11) season. I didn’t really get a chance to make an impression for all the college coaches but I feel like I made the best out of it. I used the summer to really bring my game to the next level in time for my last year of high school.

OPS: Can you give us an update on where things stand from a recruitment perspective?

OO: Currently, I have an offer from Howard. In addition, there are few other schools interested like Youngstown, VCU, Maryland, TCU, Wake Forest, Georgetown amongst others.

OPS: Tell us a little bit about some of those places you mentioned. What aspect of the program draws you to each of them?

OO: Howard, is obviously an HBCU program and my first offer. I feel really obliged to them. I’ve seen them play, talk to coach Kenneth and it’s a great program. Maryland is obviously interesting because they are a staple team for Under Armor. I’m obviously a UA guy (having played for Canada Elite on the UA circuit). Youngstown has another Canadian, Shamar -Rathan-Mayes – who went to Orangeville. VCU is interesting because one of my favorite “ISO” player Bizzy Bones Hyland attended that school – current Denver Nuggets guard. I’m just willing to put in the work at the next level regardless of the school I ended up attending.

OPS: Tell us about your plans for the summer in terms of your development. What are the aspects of your game you want to focus to improve and get better?

OO: I want to really improve on different aspects of shooting. Shooting off the dribble, shooting off the pick and roll and shooting while keeping my balance are the priorities. Off the catch, I’m pretty good at it right now. I want to improve on every aspect and also get a little stronger to get ready to play against men in college.

OPS: You mentioned improving on your shooting skills. What do you think is the kind of offensive system that fits your skillset?

OO: I think a team that plays in transition, likes getting up and down the court, a team that plays hard and plays good defense. I feel like if I can go to a team like that, I can really thrive with that program.

OPS: The last question I have for you here is with the current state of college basketball, where there is so much roster turnover unlike ever before. Can you tell us what sets you apart as a recruit coming into a new program?

OO: I don’t want to sound corny, but I’m just different. I work hard, I play defense intensively. I know a lot of players these days that don’t like to play defense. For me, defense is one of the main things that sets me apart. I want to put in the work. I want to be the best that I can be and I’ll never give up. That, in a nutshell, is what sets me apart.