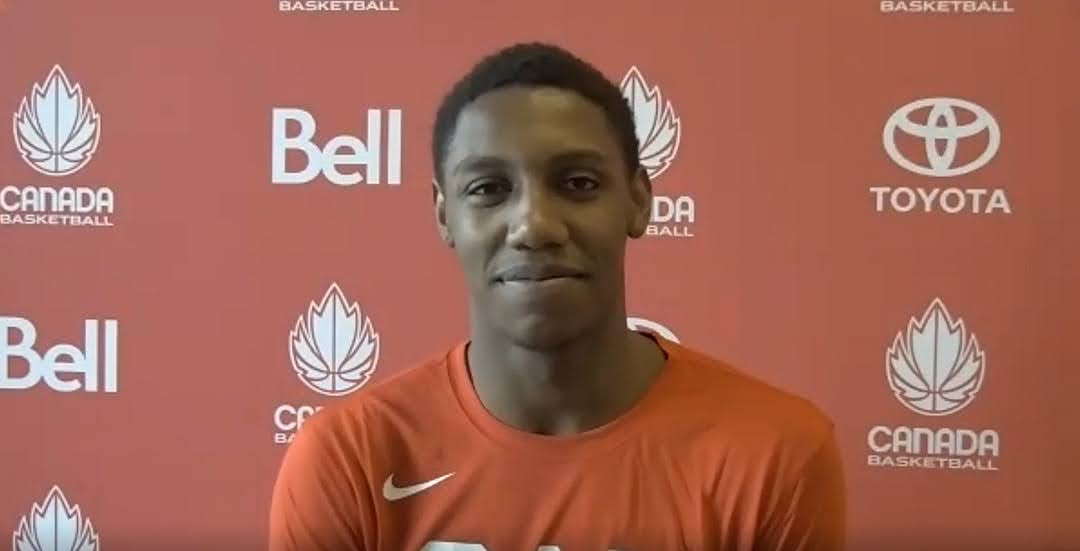 In America the 21st birthday is special. Usually accompanied by a night on the town, legally drinking a beverage of choice – something that is now becoming possible as pandemic restrictions continue to ease up across the U.S.A. – it’s a day and night to remember.

For Toronto native RJ Barrett his 21st birthday couldn’t have been much different.

Barrett, who turned 21 three days ago, spent his birthday in yet another round of COVID-19 protocols in Tampa preparing to join the Canadian Senior Men’s National Team as they get training camp underway.

“That was annoying,” said Barrett with a grin. “It was cool, I was just on the phone with everybody, family and stuff…Everybody made me feel special, so it wasn’t too bad.”

The birthday in quarantine is yet another example of sacrifices players are making to suit up for Team Canada this summer. After a shortened offseason that saw the NBA season begin in late December, and another one on the horizon as the NBA looks to get back on schedule and starting in October, it’s hard to blame impending free agents like Khem Birch and Kelly Olynyk for looking to secure their future with their next contracts.

Even without some notable names, Barrett is joining a Canadian squad that is arguably the most talented ever as a central part of the game plan alongside Canada’s prodigal son Andrew Wiggins who is returning to the national team for the first time since 2015.

Barrett is no stranger to international success with Canada Basketball. In 2017 he was a part of the U19 Canadian team that won gold in Egypt. In the final game of the tournament, Barrett led all scorers with 18 points, 12 rebounds and four assists.

Barrett says that feeling of pride is what brought him back to the national team as they look to qualify for the Olympics for the first time since 2000.

“I think this is the perfect time, I think everything is shaping up well together,” said Barrett. “Our older guys are in their prime…and our younger guys, we also have some experience.

“I think if you put that together along with the staff that we have, we’ll be good.”

Over the past two years, Barrett has improved his game with the New York Knicks. Under the guidance of head coach Tom Thibodeau, he’s improved his shooting across the board and developed into a versatile defender – something Canada will need with Grizzlies’ wing Dillon Brooks potentially sitting out this summer.

He’s also bringing a wealth of experience in the FIBA game, despite his young age, to a roster without key veterans.

“My game has always kind of been international, I’ve adjusted a little bit to the NBA…I grew up in Canada basketball,” said Barrett. “Playing the right way, making the right reads, making the right passes. It’s not going to be too big of an adjustment for me personally.”

Head coach Nick Nurse says he’s impressed with Barrett’s composure and acknowledged the path Barrett’s taken to get to where he is from Monteverde Academy to the Duke Blue Devils and now playing in a major market with the Knicks hasn’t been easy.

“This morning somebody said ‘you know, how good to do you think (Barrett) is going to be? Is he going to be an all-star?’” said Nurse. “I just keep saying he’s 21! Anything is possible… He made a huge leap this year and it takes some getting used to. There’s some pretty good grown men playing in the league that he’s playing in so to make a leap like that says a lot about him.”