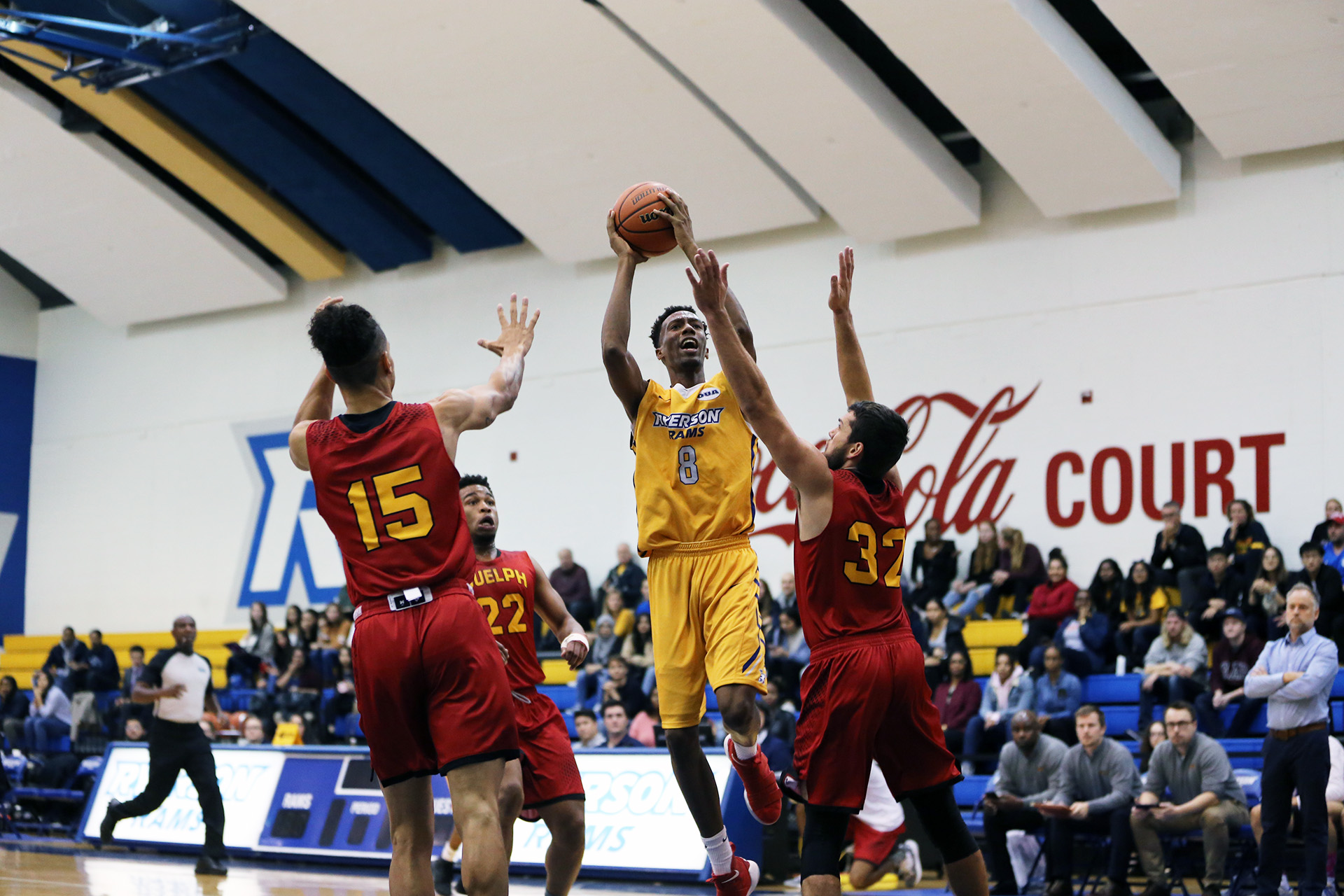 Both the Ryerson Rams men’s and women’s basketball teams entered Wednesday night’s matchups versus the Guelph Gryphons ranked second in the USports National Top 10 Basketball Rankings, released this past Tuesday.

Cara Tiemens led the Ryerson Rams with 15 points, with Bronwyn Williams adding in 14 points and 8 rebounds, as the Rams overcame a second half ten-point deficit to earn their second win of the season.

The Guelph Gryphons came into the game undefeated through two games, and perhaps using that momentum, outscored the Rams 22-8 in the second quarter to jump to a 33-26 lead heading into halftime. Fourth-year Gryphons guard Sarah Holmes scored 11 of her 17 points in the first half, including three 3-pointers, helping Guelph gain the early edge.

The Gryphons did not show signs of slowing down, as they opened up the third quarter on a 5-0 run led by fourth-year forward Ivana Vujadinovic, who finished the game with 16 points, three steals, and three 3-pointers.

Rams Coach Carly Clarke quickly went to Hayley Robertson in place of Tiemens after two minutes in the third quarter, eventually pairing the two guards to play out the rest of the game. The adjustment worked, leading the Rams on a 13-2 run to help regain the lead for the first time since the 4:53 mark in the second quarter.

The Rams’ rebounding was a key component to earning their win. While the team out-rebounded the Gryphons 54-32, it was especially on the offensive glass where the Rams managed to disrupt their opponents, who entered the game as the top offensive rebounding team in the OUA.

Ryerson’s defence also held Gryphons leading scorer and the 2017-18 OUA All-Rookie Bechard to 11 points on 5-14 shooting from the field.

“I think we guarded her with a bunch of different people,” Clarke said. “She’s a great offensive rebounder so we keyed in on that and just tried to make things difficult for her.”

Added Clarke, “I think we have some length that can disrupt her at the rim and we thought we did a pretty good job of that tonight.”

The Ryerson Rams opened up the first quarter on a 27-10 run against the Guelph Gryphons and never looked back.

Tanor Ngom and Myles Charvis led the Rams with 17 points each, with J.V. Mukama adding in 14 points as the Rams cruised to their second win of the season.

Although the Gryphons took the early lead to start the game, the Rams eventually found their rhythm, taking a 44-27 lead heading into halftime.

The Rams played to their depth Wednesday night, leading a balanced attack with five players scoring in double-digits and six players logging more than 20 minutes.

“It’s tough to defend when you have so many weapons on any given night,” Associate Head Coach Borko Popic said after the game. “Different guys can step up, and tonight it was kind of a mixed, combined effort.”

Through a combination of physical gameplay and frustration, the game took an unsuspected turn in the third quarter, where both teams entered the bonus with barely three minutes of play coming out of halftime.

To the dismay of the Wednesday night crowd in the Mattamy Athletic Centre, a total of 22 fouls were called within the 10-minute quarter (14 fouls against Guelph, 8 fouls against Ryerson). The Rams eventually outscored the Gryphons 34-20 from the free throw line by the end of the game.

“It was a physical game, and lots of fouls both ways,” Popic said. “We ended the night with 20 fouls, they ended up with 33. So it’s hard to find rhythm when there’s that many fouls, but again, both teams were physical so deservedly there’s going to be a lot of whistles.”

Both the Ryerson Rams men’s and women’s teams will face the Algoma Thunderbirds on November 3rd at the Mattamy Athletic Centre starting at 12:00pm.