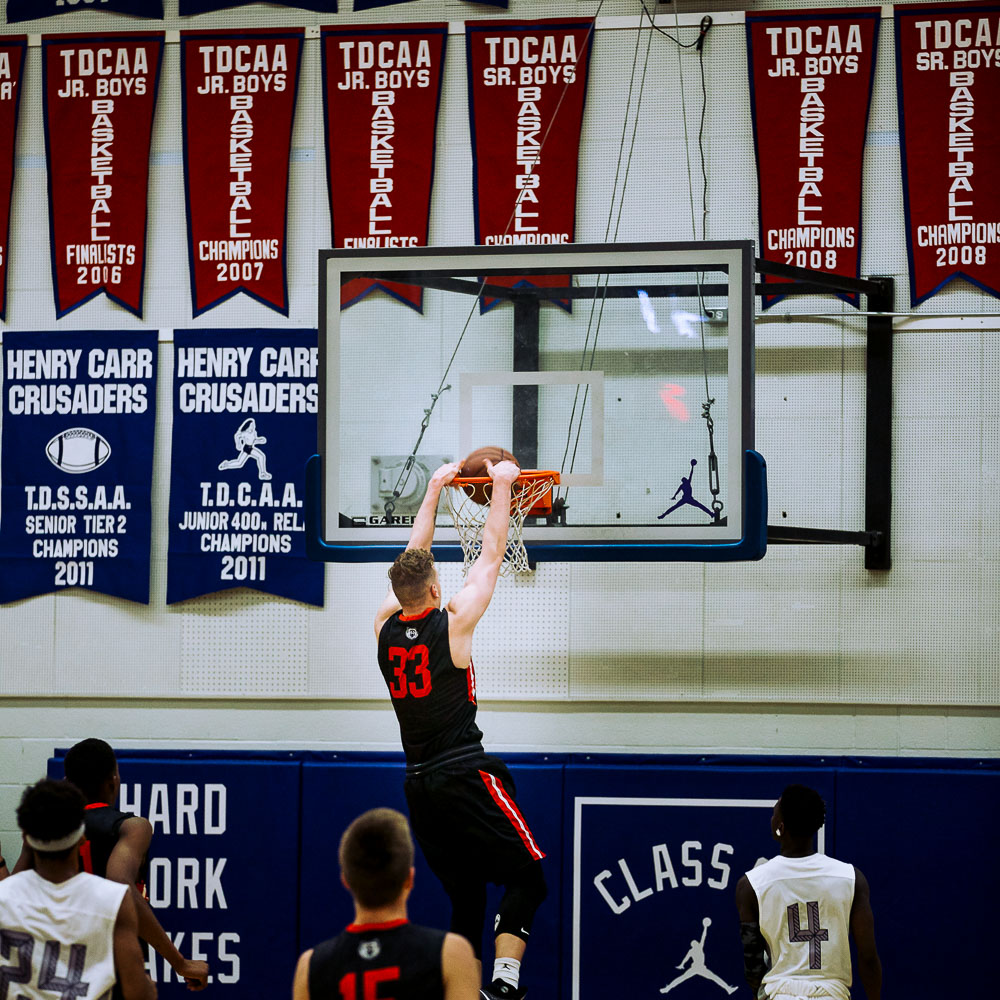 By Jaspreet GrewalNovember 16, 2016No Comments

Much to the delight of the home crowd, the Crusaders, despite being down early against a gritty Voyageurs club, managed to pull off the 85-70 victory, affording the blue and white third-place bragging rights.

James Canlas of the Vaughan Voyageurs had a game-high 23 points in the loss, while teammates William Tran and O’Shane Taylor-Douglas chipped in with 17 and 15 points, respectively.

For the Crusaders, star point-guard and team captain John Akende led his team in scoring with 22 points. Sharpshooter Mychael Paulo was no slouch, either, as the 6’4 guard poured in 21 points including nine fourth quarter points in the comeback win.

Despite neither of the two finalists being named the Henry Carr Crusaders, the atmosphere was beyond electric in Etobicoke for the Gold Medal game between two of Canada’s top prep schools: Orangeville Prep and the Thornlea Prep.

Top recruits Cashius McNeilly and Jordan Henry were inches away from clasping the Gold Medal against an up-tempo, paint-dominant Orangeville Prep team – with McNeilly knocking down a contested, fade-away three-pointer to send the game into its first over time – but it was Ignas Brazdeikis who took over in the second OT, scoring six of his 25 points in the final frame, giving Orangeville Prep the 84-82 win.

Henry, who finished the night with 24 points, fell short on a game-tying lay up in the second overtime. McNeilly chipped in with 15 points while high-flyer Sean Miller-Moore poured in 23 of his own in the loss, including a flurry of jaw-dropping dunks.

There were a series of intriguing prospects that stood out during the three-day long tournament. Below is a short list of players who caught the eyes of coaches, media personnel and fans altogether over the weekend at Father Henry Carr.

Slender-bodied sharpshooter Mychael Paulo is, unequivocally, the best perimeter shooter for FHC and, arguably, was one of the top, if not the top, three-point shooters at the Early Bird Classic tournament –particularly on Saturday afternoon where we saw him pour in 21 points against Vaughan Prep in FHC’s Bronze Medal win. Though Paulo is inherently a lights-out perimeter scorer, his athletic ability seems to be under utilized at times for someone with so much talent. Look for Paulo to elevate his slashing game once his body fills in. His raw talent is undeniable.

There’s not much that can be said about fast-rising guard Cashius McNeilly that hasn’t already been written about or discussed in previous articles and basketball discourse. His calm and cool temperament may give off a pushover impression, but you shouldn’t mistake his kindness for weakness. The 2020 prospect is Canada’s top young point guard – though he plays off the ball at Thornlea due to Jordan Henry governing point guard duties – who has a smooth outside stroke with a feel for the game that parallels a young Brandon Roy. Not only does McNeilly possess deceptive quickness and athletic ability that perplexes on ball defenders, but he also has a cauldron of moves at his disposal, making the Thornlea Prep star an exceptionally tough cover.

When comparing Jordan Henry to other elite point guards in the country, the 5’10 guard is indisputably in a league of his own. Undersized? Sure, but that’s where his so-called ‘flaws’ or ‘limitations’ end. For many, including myself, height isn’t much of a concern when you’re eradicating opposing guards and scoring 20+ on a consistent basis. Henry yearns for the opportunity to prove doubters wrong and it was on full display over the weekend, as the unruffled point-guard poured in 24 points in Thornlea’s Gold Medal loss. Whether creating for himself on the perimeter and inside against the outstretched arms of opposing bigs or generating opportunities for his teammates, it seems that the floor general’s thirst to punish opponents is never quenched, always seeking more. Was great to watch he and Orangeville Prep’s Junior Farquhar go toe to toe in the final. ‘Rock’, as he is more commonly referred to as by friends, is no doubt a special talent that has a chance to do great things with the game of hoops

Former Brookwood Elite standout and Quebec native Junior Farquhar was easily the most impressive player at FHC’s Early Bird Classic last weekend. The French Canadian, who spent last season at John Carroll in Maryland, has already received offers from Baylor, USC, and New Mexico State, according to gobears.ca, and deservedly so. Farquhar quarterbacks Orangeville’s offence in the smoothest of manners; he dictates the pace of the game and does a remarkable job of picking his spots while maintaining obedience to his job description as a point guard and finding teammates in their effective spots. He is, undoubtedly, a coach’s dream with how he controls the game. Although his jump shot is somewhat finicky, his shot mechanics are textbook. He’s got an innate ability to slow the game down when things get chaotic and push the tempo when need be. Beyond his ability to score and facilitate, Junior has illusive athletic ability with the ball and nearly dunked all-over Vaughan in the semi-finals game before being fouled and missing out on the and-one opportunity. Once he finds his perimeter shot, there’s no reason to believe Farquhar can’t take his game to new heights.

Perhaps the most explosive athlete – next to Sean Miller-Moore of Thornlea Prep – Saunders provides a ton of matchup issues for opposing clubs with his ability to knockdown perimeter shots and attack the tin with ferocity. He doesn’t just mosey on to the basket on his drives, no; he punctuates the rim with cruel intentions of destroying every fabric of the hoop. Saunders’ biggest flaw, if any, is his shot-selection during close games. You’ll have to live with his sometimes-capricious decision making at times, but for what he offers on the offensive side of things it’s a fair deal. Saunders is indisputably a lockdown defender and can guard up to three, sometimes even four, positions. The versatile guard will have a successful career at the next level and beyond, without a doubt. He’ll be a force to be reckoned with once he rounds out his game.

Much like Cashius McNeilly of Thornlea Prep, the book is out on star-forward Ignas Brazdeikis of Orangeville Prep. A big, strong versatile forward with the ability to stretch the floor, Brazdeikis’ game is all about shooting, power and picking his spots when getting to the rim. The Oakville, Ontario native via a Lithuanian heritage is exactly what you want your small forward to be like: a shot creator who can string together a flurry of points in bunches and a strong presence inside against smaller guards and forwards. Though the 6’7 forward has a strong penchant for scoring, he’s also a solid rebounder with soft hands around the rim. Strictly from the eye test, you can tell Brazdeikis is a relentless competitor who plays with a chip on his shoulder.
2017 Sean Miller-Moore – 6’5” G/F (Thornlea Prep)

The freakishly athletic Sean Miller-Moore is just that: freakishly athletic. With God-given athleticism to aid him on the court, Miller-Moore – much like Keshaun Saunders – has no remorse for the rim. Though he’s not an excellent shooter by any stretch of the imagination, Miller-Moore has shown glimpses of being able to knock down perimeter shots on occasion. But the 6’5” wing is much better suited as a slasher who can get inside and create problems for rival teams. His bread and butter is unmistakeably in the open court and he feeds on fast-paced offences. He also utilizes a deadly spin move off the dribble, which enables him to shake overzealous defenders. Though he may seem to some, one-dimensional, he has a long wingspan that can disrupt opposing guards and forwards, making him a handful to deal with in the half-court. Miller-Moore has a high ceiling, but it’s up to him to put package it all together if he wants to reach and even surpass those confines.

The game looked far too easy and seamless for 6’7” Mississauga, Ont., native O’Shae Brissett over the weekend. Not only does Brissett possess an elite level athleticism that piqued the interest of high-major schools such as Syracuse, Oregon, Memphis and USC, to name a few, but he’s slowly moulding into a dynamic perimeter shooter as well- a part of his game that’s improved dramatically over the course of the year. Anyone who was at the Early Bird Classic last weekend can attest to his knack for scoring the ball, especially in the open court where the former Findlay Prep star thrives, but he’s also a gangly, long body that can cause havoc for opposing guards and forwards. It seems as though Brissett is still growing, which may be conducive to the development of his game. Since the tournament, Brissett has committed to the Syracuse Orange, doing so on live television during a recent Toronto Raptors game vs. the New York Knicks. Good luck to O’Shae.

Possibly the most under the radar, least talked about hidden gem at the FHC tournament was Vaughan’s O’Shane Taylor-Douglas. Set aside his laid-back, calm demeanour and disposition, and focus in on his on-court abilities – Taylor-Douglas is a baller. The southpaw combo guard is a scoring-machine and he’s able to get his shot off through a variety of different ways. The ‘hesitation-king’, as I’ve pegged him as, is undoubtedly an elite scorer around the basket, but he’s also got a sufficient inside, mid-range game that makes him difficult to guard in the half-court. Taylor-Douglas is an athletic, change of pace guard that can permeate the seams and get to the tin or create for others – which he did in abundance against almost every team that his Voyageurs club battled against. His ability to finish with both hands is also worth noting, considering the lefty possesses a series of crafty moves around the rim. Look for him to have a big year under coach Gus Gymnopoulos.

The players listed above don’t necessarily represent all the top players in the event, but rather the players who stood out during the Early Bird Classic.