(Toronto, ON) – Canada’s U19 Men’s National Team battled Tunisia this morning in Heraklio Greece for their second match-up of the 2015 FIBA World Championship. Canada was dominant throughout, going on multiple scoring runs while managing to hold the Tunisian FG% to under 20% for the entirety of the game. It was clear early on that Tunisia was outclassed by the Canadian squad, as the red and white coasted to the 93-36 victory, improving to 2-0 in FIBA World Championship action.

The first quarter saw Canada explode out of the gate, dominating from the outset. Canada began the first quarter on a 13-0 run, effectively putting Tunisia on their heels immediately. Canada was led in the first by sharpshooter Corey Johnson (Ottawa, ON) who went 3-3 from three-point land, helping push the red and white to a 21-9 lead heading into the second frame. Canada shot 58% in the opening quarter while Tunisia struggled from the floor, connecting on only 20% of their shots (2-20 FG).

The second quarter began just like the first, with Canadian dominance. The Canucks began the quarter on a jaw-dropping 33-0 run, fueled by terrific defense, great ball movement and amazing shooting. Canada held Tunisia to just 2 points in the quarter, which came as free throws in the final seconds of the frame. Corey Johnson (Ottawa, ON) continued his hot shooting from downtown, connecting on two more 3-balls before the half. By halftime Canada was shooting 55.6% (20-36 FG), while holding Tunisia to just 6.5% (2-31 FG), 0-18 FG from inside the three-point arch. Canada had a stranglehold on the game, leading 54-11 going into the break.

In the third both teams came slightly back to reality. It was a much more balanced, back-and-forth quarter that saw Tunisia finally start to find some offensive flow. Canada’s hot shooting continued however, as they carried a 74-21 lead heading into the fourth.

In the final frame Tunisia continued to find their offensive flow, as Canada began to take their foot off the gas. However, it was far too little, far too late for Tunisia as Canada still managed to outscore their opponent 19-15 in the quarter, cruising to the 93-36 win.

“Canada today got a chance to play a lot of guys and get them some international experience. Hopefully we can continue to perform at a high level this Tuesday against Italy”.

Canada’s next challenge comes on Tuesday June 30th 2015 at 11:15am EST where they are set to face Italy. Stay tuned to @CanBball on twitter for live stream and live statistics links. 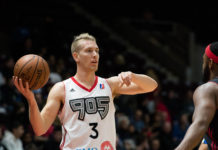 JUNIOR WOMEN FALL TO USA IN FINAL GAME OF PRELIMINARY ROUND 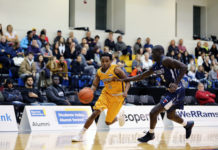 Ryerson Rams Men’s and Women’s teams get sweep vs. U of...