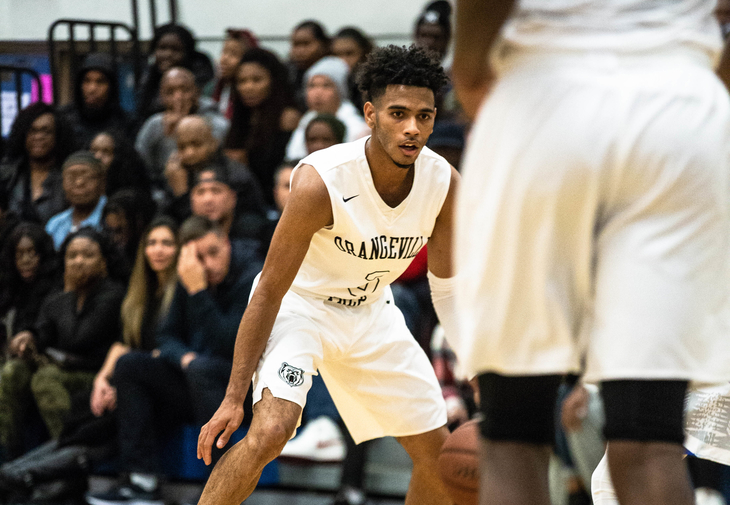 The 2018-19 OSBA season is underway and several players have already begun to stand out from the crowd. Orangeville Prep is once again the most dominant team in Ontario and they look poised to regain the OSBA championship from TRC Academy who were the 2017-18 champs. Orangeville is loaded with future NCAA stars but they are not the only program in the OSBA who will send numerous players to play at the next level.

Here are 10 current players in the OSBA you have to see play in person this season.

Samuel is rated as a 4-star recruit by multiple recruiting services. He is fielding a host of offers from some of the bigger schools in the Unites States including Georgetown, Seton Hall, UConn, South Carolina, Wake Forest and a dozen more. He played for Team Canada this summer at the U18 FIBA America’s Championship and is playing his final season at Orangeville Prep after spending last season in Utah at Wasatch. He’s big, physical and fast and will be an immediate impact player for whatever NCAA school he chooses. You’ll be watching him on ESPN and CBS at this time next year.

Rathan-Mayes is the floor general for the most explosive team in Canada with the entire offence running through him. He has the highest basketball IQ of any player in the OSBA and has the poise and composure of a fifth-year NCAA senior. Rathan-Mayes is exceptionally quick and has a motor that simply never stops while making everyone else on the floor look good. His older brother Xavier starred at Florida State and made his NBA debut last season with the Memphis Grizzlies. Shemar spent the summer playing for Team Canada’s U17 squad and is fielding offers from the likes of Yale, Columbia, Fresno State and more.

Phillip has already committed to play at the University of San Diego next season which is an absolute steal for that program. Phillip is originally from Edmonton which is why he has been a little under the radar prior to this season. He is flat out the best athlete playing in the OSBA this year. The second you walk into the gym his athleticism literally jumps out at you. Phillip has the ability to become an all-conference talent at the NCAA level.

Moore is a Philadelphia native who came to Canada last year to increase his chances of playing NCAA basketball (which was unthinkable 15 years ago). He was just named OSBA Player of the Month for October after averaging 30.8 PPG. He is the most underrated player in the league who should be receiving more NCAA interest. He can shoot from anywhere in the gym, plays tenacious defence and makes every one of his teammates better just by being on the floor. He can be a four-year starter for any number of NCAA teams if given the opportunity.

Alexander-Moncrieffe is a freakishly athletic forward who could play four different positions at the NCAA level. He is rated as a 4-star recruit by multiple recruiting services and will no doubt up his rating to a 5-star at some point this season. He is fielding offers from likes of Florida, Arizona State, Georgetown and Seton Hall among others. Although he is listed at 6’7, he plays much longer with some of the longest arms you’ll ever see on a player. His athleticism enables him to jump out of the gym and he has vastly improved his ball handling ability this season which allows him to dominate any player he faces one-on-one. Alexander-Moncrieffe has NBA potential.

Sakota just announced that he has committed to play next season for Harvard University. He has the talent to play for a major conference NCAA team but made the wise decision of getting an Ivy League education while having the chance to play high-level basketball as well. He played for Canada at the U17 and U16 level the past two summers and is one of the most dominant players in the OSBA.

Stucke is fielding a host of offers, which include Ivy League schools Harvard and Princeton among others. He plays much longer than his 6’6 frame and is a nightmare to defend because he can shoot from anywhere in the gym or attack the basket and dunk at will over his opponent. Stucke plays with the poise and maturity of a player 10 years older than he is and he can surprise defenders with his quick first step and athleticism.

Barthelemey is one the smoothest players you’ll ever see on a basketball court. At times, it looks as though he is wearing ice skates on the court as he glides past a defender while attacking the basket. He can shoot from range, attack the rim and can dominate defenders much bigger than him because of his speed and athleticism. He played this summer for Team Canada’s U17 squad and has started to receive offers from the likes of Arizona State and more.

Jones is the most physically dominant player in the OSBA. He was one of the best defenders in the OSBA last year but he spent the summer working on the offensive side of his game with amazing results. When Jones puts the ball floor and attacks the basket he’s likes a Mack truck and defenders simply clear out of his way. Jones is the younger brother of Greg Oden who was the No.1 pick in the 2007 NBA draft (ahead of Kevin Durant). Scouts unfairly compare Jones to his older brother’s skill level but in the early part of the 2018-19 season he looks to have brushed those comparison’s aside and is creating his own identity on the court. Jones will be a dominant player at the NCAA level and can play both center and power forward.

Hilts is a throwback because he is one of the few players in today’s game who loves to play defence. Some of his teammates at Southwest are receiving more attention from NCAA schools but Hilts is a guy who simply never stops competing. He is one of the best man-to-man defenders in the OSBA who frustrates his opponents because he doesn’t allow them an inch of space through all 40 minutes of the game. He has a quick first step and can shoot from range and he is an absolute pleasure to watch compete on the basketball court.

Royal Crown’s T’yana Todd narrows it down to 5