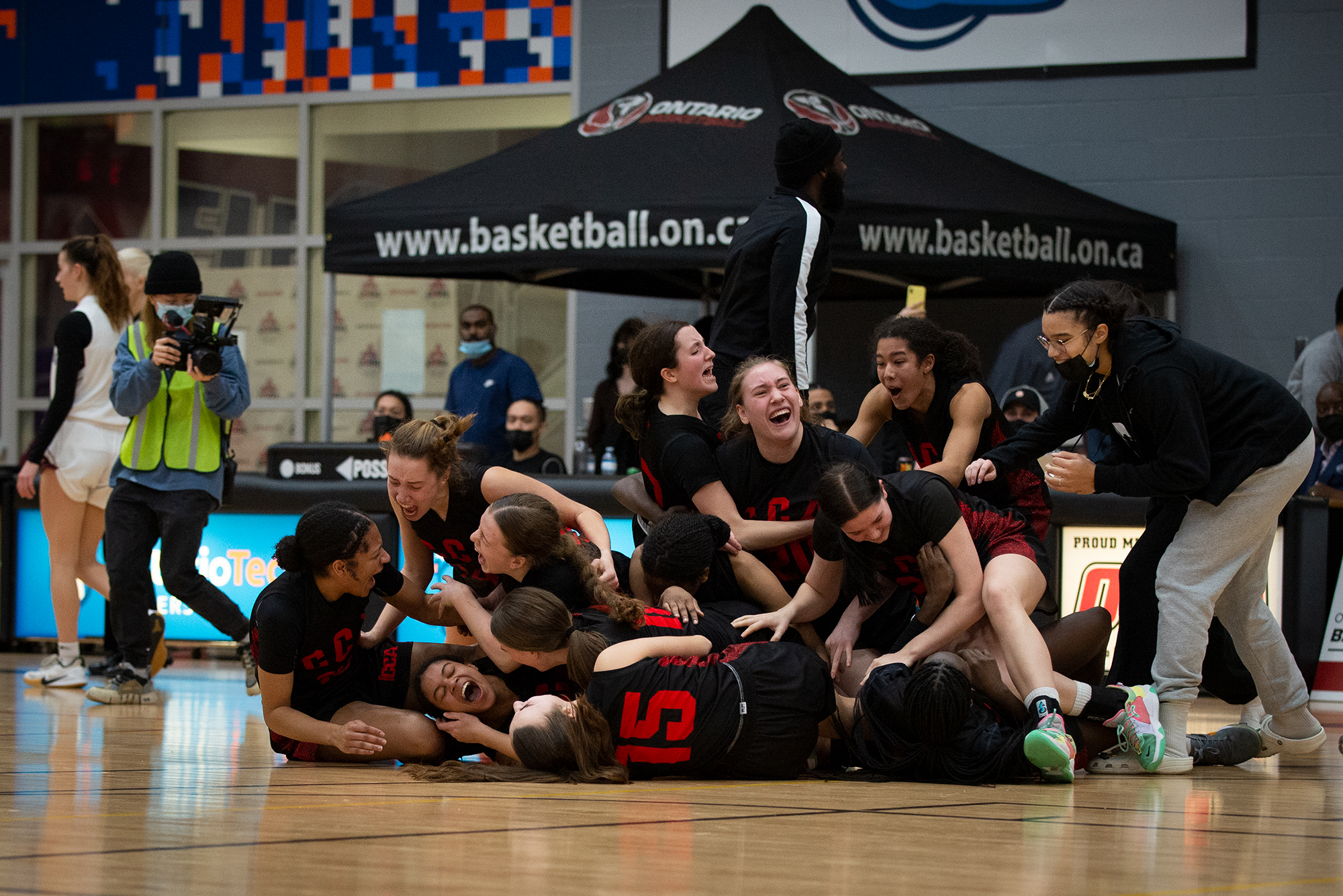 By Shaun McLeodMarch 7, 2022No Comments

After four days of hard-fought games, heartbreaks, and highlights, the 2022 Ontario Scholastic Basketball Association (OSBA) Final 8 Championships are in the books. Oshawa’s final day of games had the best action yet, with a handful of standout performances and upsets that solidified two teams as champions.

Capital Courts Academy (CCA) came into each game this weekend as the lower-ranked team but left the champions after taking down King’s Christian 65-61 in the first game of the day.

“It feels amazing. I can’t even describe it,” said Finals MVP Cassandre Prosper.

King’s Christian started slow out of the gate and struggled to contain Prosper as she dominated in the paint with 33 points and 15 rebounds. Prosper also contributed defensively, covering bigs, picking up King’s Christian’s lead guard Mackendra Konig in the half-court offense, bothering Konig’s shots with her length, and forcing seven turnovers.

Konig and Jasmine Bascoe once again led the way for King’s Christian with 19 points apiece, with Bascoe adding eight rebounds to their efforts. Even with the struggles to contain Prosper, King’s Christian made several runs throughout the game to bring it to a four-point deficit. However, CCA always had an answer, with Prosper showcasing her bag of moves and Catarina Garvey scoring 12 points, with two key made threes.

Head coach Fabienne Perrin-Blizzard credited her team’s success to their ability never to give up, even when faced with two years of a global pandemic and the inconsistent access to gyms as a result of it, which led to the CCA squad reaching out to Fort Erie for a place to play.

Jaden Clayton seals the game at the line (Photo: Shaun McLeod for OPB)

Fort Erie took home the OSBA Finals trophy with an 81-71 victory over United Scholastic in one of the closest matches of the tournament.

The game was back and forth until the waning minutes of play, when a controversial offensive foul call led to Vasean Allette being assessed a technical foul for an altercation with Finals MVP Jaden Clayton. Clayton would head to the line and put the game away, nailing the key free throws.

“I felt confident (at the line),” said Clayton, who had 18 points, eight rebounds, and eight assists. “Me, our coaching staff, coach Scottie, we play a simple game every day in practice to work on those types of moments and have pressure on us all the time. That was nothing new for all of our guards.”

Leonard Miller once again stuffed the stat sheet, scoring 26 points, grabbing 13 boards, dishing three assists with two steals and a block. Miller credited his ability to find his killer instinct with the preparation going into the game, taking care of his body, and being consistent with the little things.

“It’s just a killer mindset… I’m cool with those guys on the other team, but going into that game, it was all serious, no friends in-between those lines,” said Miller.

Fort Erie’s Ishan Sharma said he’s “over the moon” as he adds the OSBA Championship to his FIBA U16 Americas Championship bronze medal from August. The Fort Erie squad will now be looking forward to the upcoming Grind Session World Championship on March 12, where they’ll look to transfer their success within Canada to the United States.

Miller proved that he was a name to remember for years to come and showcased a complete game that could lead to an NBA landing spot. Although he started the tournament with a slow showing in the first half against J.Addison, he’s turned it on since half time, scoring 19 points in that game, 34 against Royal Crown Academy, and 26 in the finals vs. United Scholastic Academy.

Fisher is closing in on becoming a well-known commodity in the world of Canadian basketball. With 27 points and 10 rebounds against Orangeville and another 21-point, 11-rebound double-double against United Scholastic Academy, he proved that he has all the tools to take it to the next level, but Romad Dean stole the show in Crestwood Prep’s games.

Dean’s devastating poster against Orangeville Prep quickly made the rounds on social media and has a claim for the OSBA dunk of the year. Dean also led the charge for the Crestwood victory against Orangeville Prep in the final moments and finished with 22 points and 17 rebounds before having another 24 points, 13 rebound showing in a loss against United Scholastic Academy.

With a roster like King’s Christian, it’s hard to single out just one player. With seven players headed to the NCAA, and another headed to U SPORTS, they’re absolutely loaded with talent, but Konig’s ability to drive their offense with ease land her the standout player honours.

She cut the rim effortlessly at times and was a terror in transition for teams to deal with – only the eventual champions, Capital Courts Academy, had any plan to deal with her speed. Her 16 points and five assists against Royal Crown steadied the ship after a rocky first half for King’s Christian. She followed up that effort with 29 points, seven rebounds, six assists against Niagara Prep, and finally 19 points in the tournament’s final game.

No one in this tournament could match the physical presence in the paint that Prosper brought to the table – but she’s not just big; she’s skilled as a passer, dribbler and has the confidence to take her shot all the way out to the three-point line when left open.

Her 33-point, 15-rebound finals performance was breathtaking, and throughout the tournament, she’s only gotten better offensively as the competition got tougher. Defensively, Prosper showed she could handle almost anything the modern game can throw her way, picking up guards in half-court sets, defending opposing team’s bigs, and communicating switches to disrupt the flow of the opposing team’s offense with ease.