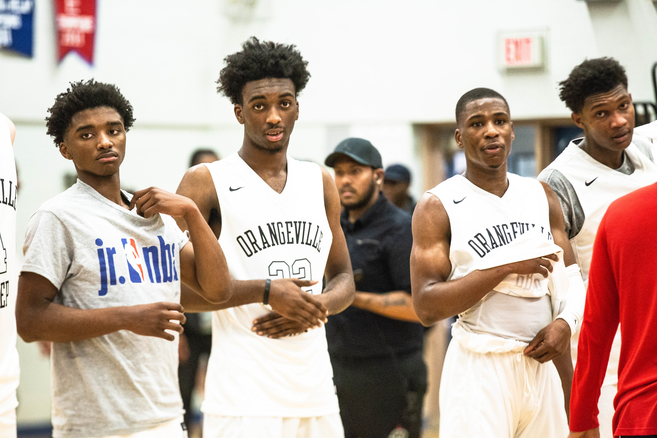 By Drew EbanksNovember 10, 2018No Comments

Another Father Henry Carr Early Bird Prep Classic (16th) has come and gone and as per usual it was a solid event from start to finish. Kudos go out to FHC Prep Sr. Boy’s basketball coach Paul Melnik and staff, students and volunteers who enabled the well organized tournament to go off without a hitch, producing unforgettable highlights while exposing the crowd in attendance in the Father Ted McLean gymnasium and online to the rising talent this country continues to produce. But also, we have to give props to some of the great coaches on the sidelines including the aforementioned Melnik, Gus Gymnopoulos, Kevin Jeffers, Charles Hantoumakos, Cam Nekkers, Kevin Barnes and many more. Players win games but coaches hold it all together. Myself, Elias Sbiet of North Pole Hoops had the pleasure of calling the games on Championship Saturday, of course brought to you by ILLMindsMedia and On Point Basketball.

In case you missed any of the action check out the ILLMindsMedia YouTube page HERE for the archived semi-finals, bronze medal and Championship games.

It’s time to offer my observations of the event.

Congratulations to a super-talented Orangeville Prep squad who went undefeated in the event, culminating in a victory over a very tough and much-improved hosts Henry Carr.

Shamar Rathan-Mayes was excellent all tourney long and took home the MVP with teammate Jevonnie Scott earning a tournament All-Star selection. Keep in mind O-Prep was without high level baller Tyrese Samuel who was in the U.S. on a recruiting visit. Henry Carr’s Josh Morgan, Jalen Menzies and Kobey Lam had solid weekends for the hosts.

Thornlea took home the Bronze medal defeating York Region rivals Vaughan in a game that was a back and forth affair until the Thunder took the game by seven points. Their young force Jahmyl Telfort showed why he is one of the top prospects in the 2020 class. Thornlea was without Keeshawn Barthelemy (injury) in the tournament. Ryan Brooks shouldered the load for the Voyageurs in the Bronze medal game and was stellar throughout the entire event. Vaughan also got solid contributions from Wazir Latiff, Mateo Spencer-Gomes and Tyson Dunn throughout the tournament.

There were some known studs who did their thing but the tournament also brought some lesser known talents to the forefront.

Rathan-Mayes was incredible throughout the tournament for Orangeville Prep showing a marked improvement in confidence and basketball ability over the last year. He was confident and made all the right plays a lead guard is expected to make, running the show while finding teammates and then scoring in a timely manner. He scored 23pts, 29pts, 15pts and 15pts (20.5ppg avg.) in the 4 games, but more importantly showed why top schools are interested in the younger brother of current pro Xavier Rathan-Mayes.

The “Mr. Do It All” for FHC, Morgan was a man possessed in the Henry Carr semi-final win over Vaughan Prep, notching a blistering & tournament-high 40pts en route to a win. He scored from inside and out and used his imposing physique to bully his way to the basket repeatedly while punishing the Voyageurs from the line. What I really admired about Morgan was his tenacity and toughness on defence. He’s just the kind of two-way player any team at the next level would desire. Unfortunately Morgan was hindered a bit by an ankle injury in the Championship game, which he sustained in the semi, but still earned a well-deserved tournament All-Star honour.

Jahmyl Telfort is a Quebec native who has found his place here in Ontario with the Thornlea Thunder. Telfort was dominant throughout the weekend showing an ability to score inside on the block with a plethora of nifty posts moves as well as from midrange and behind the arc. He also, showed the willingness to mix it up inside against the bigs on the opposing teams in the tournament and will be a player to be reckoned with in the OSBA for the remainder of the season. He’s also extremely humble and what will endear him to coaches at the next level is his even keeled demeanour and his “act like you’ve done it before” personality, not getting to low or too high when he’s on the court.

Jevonnie Scott was a highlight reel all weekend, showing his versatility inside the paint with crossover and dunk finishes as well as three pointers over defenders. Scott is a physically intimidating player who had as many positive plays on defence as anyone in the event, notching several big blocks for Orangeville Prep. Scott’s potential is sky-high and will continue to garner high major NCAA Division I interest.

Arguably the fastest player in Ted McLean gymnasium, Menzies stands at 6’0″ but plays much bigger and is one of the toughest players on the court. Menzies showed an ability to score, especially out in transition but it was his leadership and tenacious defence that stood out. He battled against all the top guards he faced and showed he can hang with them while leading his team to the finals.

Brooks is obviously a very physically dominant player at the High School level and he was a handful to stop inside for the Vaughan Prep Voyageurs. The wide body moves very well and enjoys punishing defenders when he has his back to the basket. But Brooks can also step out and hit jumpers as well as threes which makes him a tough cover for defenders. Vaughan came up short to Thornlea Prep in the semis but through no fault of Brooks who poured in a stellar 35pts in the 89-80 loss.

Price always plays the game with a ton of confidence and swagger. He can shoot the lights out from outside and also isn’t afraid to take it to the hole despite his slender physique. He’s simply a gamer who notched an impressive 27pts for his squad in a preliminary round loss to Thornlea Prep (60-50). Look for Price’s stock to continue to rise as the year progresses while leading the top High School Program in the GTA.

Moncrieffe possesses physical attributes that place him at the upper echelon of athletic perimeter players in this country. He came through with several highlight reel plays in the tournament and continues to use his out of this world athleticism to hinder his opponents defensively throughout the game. Other than needing to be a bit more demanding of the ball at times, Moncrieffe is a player on the radar of a whole lot of Division I NCAA coaches.

Elvis is one of those players you must see in person. He’s an adept ball handler who can get to any place on the court and finishes extremely well in transition. The 2020 player is starting to garner big time attention and put up games of 24pts, 23pts in the prelims as well as a game-high 28pts in the Consolation finals victory over Central Tech Prep. His upside is extremely high.

Davis is a wizard on the court, often making shots that other ballers wouldn’t even dare to take. He’s fearless and a true gamer showing an ability to get to the rack without hesitation as well as let fly long distance bombs from outside the arc. He’s definitely a joy to watch and has nice length at 6’2” for a point guard. He put up 28pts and 22pts in Central Tech’s first two games, which included a tough 77-75 loss to Orangeville Prep in their tournament opener. All eyes will continue to be on Davis as the season progresses.

PLAY OF THE EVENT: Orangeville Prep’s Jefferson Koulibaly’s monster dunk vs. Thornlea Prep in the semi-finals brought the crowd to it’s feet as Koulibaly roared with excitement. That’s the kind of play that fans are used to at the FHC Early Bird Prep Classic.