(TORONTO, ON) – Canada Basketball’s Men’s High Performance is pleased to announce the 19 athletes who have been invited to the June 6-10 U19 Men’s National Team training camp in preparation for U19 FIBA World Championships in Heraklion, Greece. The camp will take place at Humber College – North Campus.“We expect this to be a highly competitive camp,” said Roy Rana, Head Coach of the 2015 U19 Men’s National Team. “We have a strong group of athletes and look forward to preparing for the U19 World Championships.”Rana (Ryerson University) is coaching the U18/19 Men’s National Team for the fourth consecutive season. He will be joined by assistant coaches Jamie McNeilly (Virginia Tech), Kirby Schepp (University of Manitoba) and Steve Morrison (Maine Red Claws). Canadian Basketball Hall of Famer, Steve Konchalski (St. Francis Xavier University) will be a mentor coach for the group.

The U19 Men’s National Team will hold an open practices for media in preparation for U19 World Championships in Heraklion, Greece from June 27-July 5.

WHO: Athletes and coaches from the U19 Men’s National Team training camp roster

Both practices on June 10 will be open to media 12:00 P.M. & 7:30 p.m. Coaches and athletes from the training camp roster will be available for post-practice scrums. Please contact [email protected] to confirm attendance.

The U19 team will compete in the FIBA World Championships after finishing 2nd at the U18 FIBA Americas tournament in 2014.

Additional inquiries can be directed to [email protected]

Following training camp, the team will head to Europe to train, as well as compete in exhibition games in Spain ahead of the World Championships. In 2014, the squad finished 2nd at FIBA Americas. Canada is currently ranked 3rd worldwide in the FIBA Men’s age-group rankings. 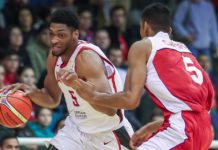