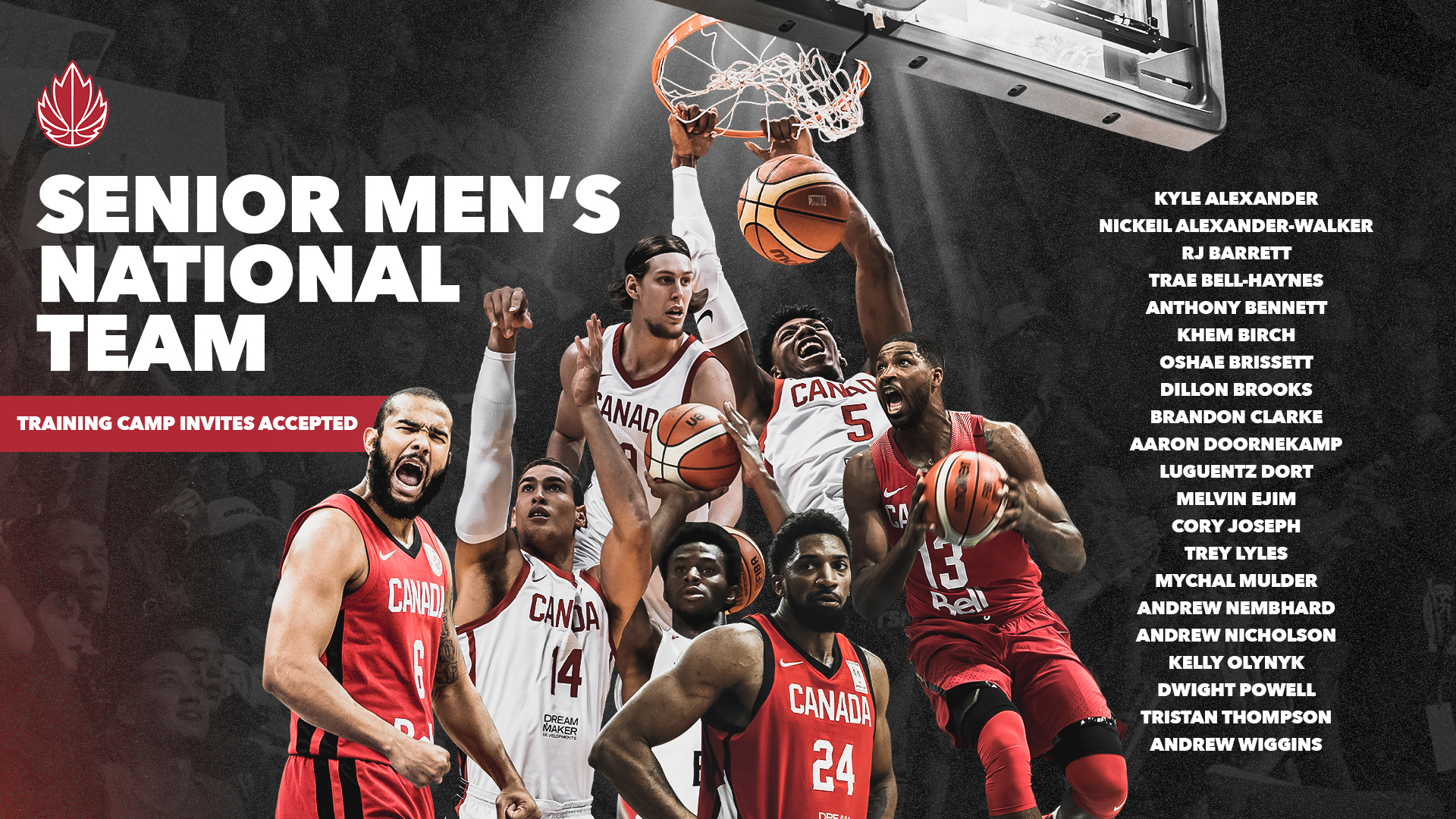 TORONTO, Ont. (May 27, 2021) – Canada Basketball is pleased to announce the 21 athletes who have accepted invitations to attend Canada’s Senior Men’s National Team training camp (June 16-24) ahead of the FIBA Olympic Qualifying Tournament.

“There is no greater feeling in sports than the chance to represent your country on the highest international stage at the Olympic Games,” said Rowan Barrett, General Manager / Executive Vice-President, Senior Men’s Program.  “Our players and staff fully recognize the unique opportunity that lies ahead of us and I would like to commend them for their dedication to playing for Canada this summer.”

As a result of the on-going COVID-19 pandemic and current quarantine protocols for training in Canada, the Senior Men’s National Team will open training camp in Tampa, Florida next month at the Toronto Raptors temporary training facilities before travelling to Victoria ahead of the start of the tournament.

“Training in Tampa next month provides our team with a first-class environment that will allow us to safely prepare to achieve our goals at the FIBA Olympic Qualifying Tournament,” said Nick Nurse, Head Coach, Senior Men’s National Team. “I’m looking forward to having the players and staff join me here in a few weeks and getting back to work.”

Canada is hosting one of four FIBA Olympic Qualifying Tournaments at the Victoria Memorial Arena in Victoria, B.C from June 29-July 4, 2021.  Fans in Canada can catch all the action live on CBC across its various platforms, both on television and online, as well as streamed on DAZN.

Over the course of the last 18 months, the Friends of Victoria Basketball have worked diligently to make next month’s tournament a reality and give Canada a home court advantage as they look to qualify for the Tokyo 2020 Olympic Games.

“On behalf of Canada Basketball, I would like to extend my sincere thanks to the Friends of Victoria Basketball, the entire local organizing committee, as well as the local, provincial and federal medical experts for their continued commitment and tireless efforts to host the FIBA Olympic Qualifying Tournament in Victoria this summer,” said Glen Grunwald, President & CEO of Canada Basketball.  “Everyone has demonstrated a tremendous sense of flexibility and resolve as we continue to navigate the shifting pandemic conditions on a daily basis. They are a special group of people.”

The FIBA Olympic Qualifying Tournaments feature the 16 best-placed non-qualified teams from the FIBA Basketball World Cup and two highest-ranked countries per region in the FIBA World Ranking, Presented by NIKE.

The winner of the FIBA Olympic Qualifying Tournament in Victoria has drawn Group A for the Group Phase of the Tokyo 2020 Men’s Olympic Basketball Tournament and will face Iran, France and USA.

Canada is currently ranked 21st in the FIBA World Ranking, Presented by NIKE and is looking to return to the Olympics for the first time since 2000.