Final Tournament held by Eastern Commerce as the school will be shut down after this school year. It will be missed!

The stage was set for an amazing final between two powerhouse teams. A well balanced Thornlea Thunder team against a hungry and hard-nosed Eastern Commerce Saints. Eastern came out the gate with a bang scoring their first 8 points in transition. It looked like Eastern was on its way to pulling away with this one early. Thornlea maintained their composure and were able to get into their flow on offence and by the end of the first quarter they managed to bring the lead down to 5 points. Eastern riding adrenaline, again was able to come out in the second quarter with a offensive barrage, lead by guard Dwight Dixon hitting some big time shots behind the arc and getting out in transition while scoring a few easy layups. But once again Thornlea managed to weather that storm and were able to go into the half only down 30-23. Dixon lead all scorers with 14 points at half time.

Eastern did a great job controlling the tempo in the third quarter. Thornlea tried to get a run going, but were stopped by the Saints due to their relentless defensive front. Mid way through the quarter,  All-Star Guard Jason MacDonald went down with an injury on a layup attempt. Many thought that this occurence would have been the spark that would help the Thunder change the outcome of the game. But as history has proven before with the Saints team, when times get rough, the saints just play that much tougher. By the end of the third they extended their lead to 13 (46 – 33). The fourth quarter was a back and forth battle. Thornlea with their backs against the wall, were able to go on a run to close the gap to a 6 points with 2 minutes to go in the game. However, Coach Jeffers has been in these types of situations many times before and knows what to do to keep his team focused on the task at hand. The ball was in his premier guard Narcisse Ambanza’s hands, who made sure that Eastern was not going to let this game slip through their fingertips. The end of the game had Eastern use a 11-2 run to finish the game. Topping off with Tournament MVP Ambanza recording a game high 23 points.

After a tough gritty comeback from behind overtime victory against St. Patrick’s Ottawa the night before, Crescent School brought that energy to the beginning of the game against Eastern in this semifinal game, jumping out to an eye opening 7-1 early lead. Eastern had a little trouble getting into their running game as everything seemed to go in the favor of Crescent School. Simon Mikre had an amazing start to this game. He was getting to the rim easily, getting his team involved and had Eastern on their heels early on. Coach Jeffers was able to regroup his team, and once they were settled on D, they were able to get stops. Kadre Grey took the offensive load on his shoulders, scoring 8 of his 19pts in the first quarter helping Eastern to take the lead at the 2:30 mark of the first frame. Mikre was up to the battle early on answering back with a few plays of his own towards the end of the quarter to close the gap at the end of the first quarter as Eastern led 17-13. The second quarter it was the Eastern show from start to finish. They were able to get out in transition and get open looks for easy layups. Eastern was also able to contain Crescent School offensive attack. Eastern’s defensive intensity was on high and sped up Crescent School’s offensive attack which led to a lot of missed shots and layups by the underdogs. Narcisse Ambanza took over the offensive rush in the second quarter scoring 7 points for his squad. Although it was a tough second quarter for Crescent, you had a sense that they were not ready to crumble in the rest of the game and it showed in the third quarter as they were getting some key stops which enabled them to stagy within striking distance. Eastern was not able to pull away on this gritty Crescent team who had no quit in them. This quarter was very physical and Eastern surprisingly did not respond well to it. No matter what Eastern threw at Crescent, it wasn’t enough to pull away. The fourth quarter lacked any good sense of flow due to a lot of foul calls. The physical play increased and a questionable intentional foul against Crescent School along with a costly technical foul by their Head Coach Ari Hunter, sealed the fate of a comeback for Crescent School. The final score had Eastern Commerce edging out Crescent School 56-45. With this win. Eastern Commerce moved on to play the Thornlea Thunder in the finals.

This game was the best played game of the day. Both teams were evenly matched and it showed in every possession. Playing hard on both ends of the floor, executing their offense and playing tough defense on the other end. This was a better fundamental game than the other games that were played on Championship day. It was clear right from the get go that St. John Paul was trying to expose the match up in the paint, by continuously pounding it inside to their All-Star center Brandon Ramirez who had a team high 20 points for the Scarborough school. Thornlea managed to control the tempo of this game by producing a balanced attack against St. John Paul. Thornlea employed a very physical quarter-court, 2-3 zone which was able to wear down St. John Paul. St. John Paul could’t hit shots down the stretch and thus failed to match Thornlea’s offensive attack on the opposite end. Although they were in early foul trouble in the second half, Thornlea was able to remain in control of this game. Niroshan Surendran had a team high 15 points for the Thunder. With this win, they moved on to play against Eastern Commerce in the final.

Written by Kareem Griffin of In Charge Sports 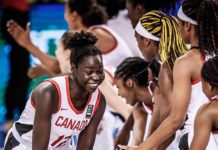