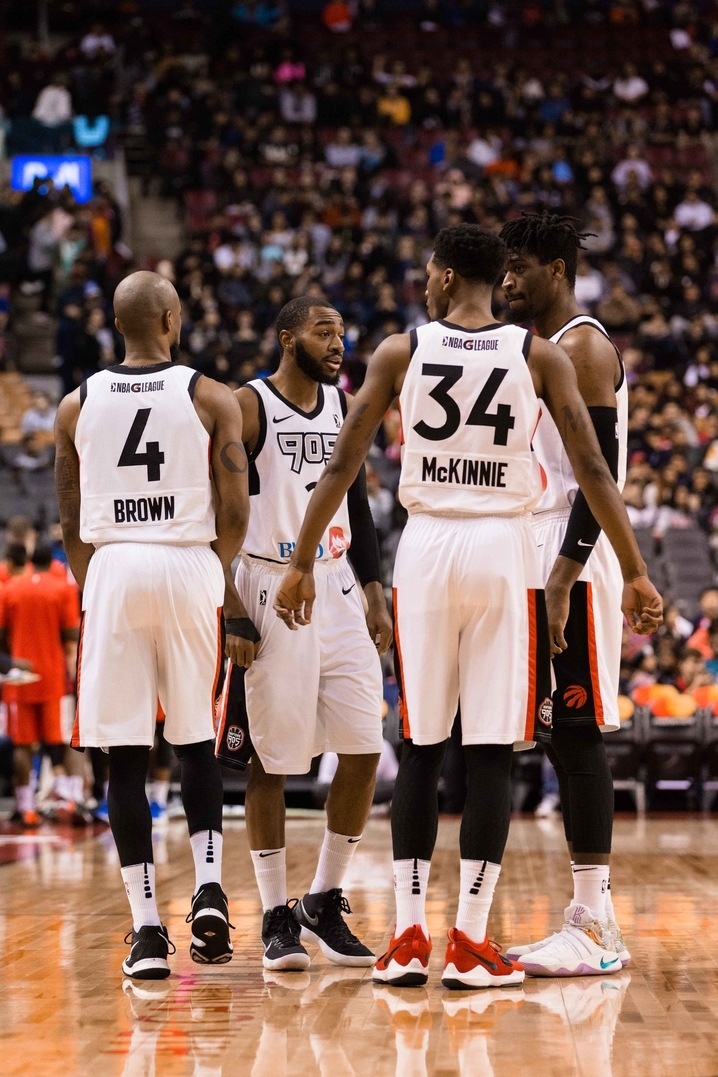 (Toronto, ON) 18,900. That number was the record-breaking attendance for Tuesday’s game at the Air Canada Centre as the Raptors 905 faced off against the Rio Grande Valley Vipers, in a rematch of last year’s G-League Finals.

Most of the sellout crowd was kids, as it was a school day game, courtesy of the 905 organization. As was the case previously against the Westchester Knicks, it was deafening.

This marked the 905’s third consecutive loss, which dropped their record to 4-8 on the season. Down by as many as 22 in the first half, the Raptors’ affiliate cut the lead to as little as two (104-102) but the Vipers scored eight in a row to put the game out of reach.

“The fans are great here all the time whenever they’re in this building. It’s a real home court advantage for us,” 905 head coach Jerry Stackhouse said. “As you saw in the second half, they really got into the game and I thought some of that energy helped our guys kind of push once we got it close but we got to find a way to send them home happy.”

Former Boston Celtic RJ Hunter led the Houston Rockets’ affiliate team with 30 points on five made triples. Monte Morris set the tone for the Vipers from the point as he finished with a double-double, with 25 points and a game high 12 assists. Morris also committed a game high four steals.

Danuel House was the fourth Viper that scored in double figures; he finished with 19.

Lorenzo Brown scored 23 of his game high 36 points in a monster second half for the 905, taking advantage of lanes to the basket. Brown also finished with a triple double, finishing with 11 rebounds and 11 assists. Alfonzo McKinnie scored 23 points and had a game high 16 rebounds.

“I just went out, played hard, and crashed the glass,” McKinnie said. “Luckily, (I) got some offensive rebounds.”

Two other 905 players joined Brown and McKinnie in scoring in double figures as Shevon Thompson returned from a two game absence and dropped 19 points while Bruno Caboclo had 13.

“It was really important (to have him back),” Stackhouse said about Thompson’s presence in the paint. “I love what he brings; we got somebody on the block that we could really take advantage of.”

Rio Grande started off strong, scoring the first six points of the game, highlighted by House’s driving dunk. Stackhouse, frustrated by the lack of defense from the 905, immediately called a timeout.

“It was pretty much just get it together and pick it up. We know as a unit what we got to come out and do,” McKinnie said. “We came out and had a few errors on the defensive end, including myself and that’s just something we can’t do because we put ourselves down early and made it tough for us to get back in it.”

“I think (it was) just our effort to start the game, you know, focus,” Stackhouse said. “I had to call a timeout early because we (allowed) a straight line drive to the basket.”

The timeout seemed to light a fire in the 905 as they went on a 12-4 run to take a brief 12-10 lead, after a pick and roll that was executed perfectly between Brown and Kennedy Meeks, ending with a Meeks layup.

However, it was the only lead that the 905 would have as the Vipers closed out the quarter on a 17-6 run as Shane Richards came off the bench and hit a pair of triples. Rio Grande took a 27-18 lead after one; Morris had eight points in the first quarter.

After missing their first eight shots from behind the arc, Davion Berry hit the 905’s first triple with 11:25 to go in the second quarter. But the Vipers went on a 7-0 run, capped off by a vicious dunk from Lydon to extend their lead to double digits at 37-23.

The 905 cut it to eight (42-34) with 5:54 to go in the half but once again, Rio Grande responded, scoring six straight points, capped off by a steal and windmill finish from House.

The 905 finally got it going on the offensive end as a pair of threes from Caboclo sparked a 23-9 run and cut a once insurmountable lead into a seven-point deficit (75-68).

“The three pointer is a game changer,” Stackhouse said.

“We just woke up,” Brown said. “Tried to be more aggressive on offense and defense.”

Both teams then played even for the next 20 points before the Vipers closed out the quarter on a 9-3 run to take a 94-81 lead heading into the final quarter.

Brown had 27 points through three quarters, 14 of them coming in the third as he found seams heading to the basket against the Vipers’ pick-and-roll defense. He also scored 10 straight at one point for the 905.

“Their bigs were pretty slow on their feet and the paint was always open so I just took it upon myself to make that decision and be aggressive,” Brown said.

Caboclo (10) and McKinnie (9) also had huge scoring third quarters for the 905 as well. Meanwhile, for Rio Grande, Hunter and Morris each had seven points in the quarter

A putback layup from Lydon gave the Vipers a 102-88 lead before the 905 fed off the crowd’s energy and burst out on a 12-2 run, capped off by a lob finish from Thompson. Brown had seven points and three assists during that span.

“It was crazy,” Mckinnie said with a smile, when asked about the energy the kids provided during the fourth quarter. “I love playing in front of all the little kids.”

However, the Vipers responded once again with an 8-0 run, with Hunter scoring five straight points during that time. This time, however, the 905 could not come back as despite intentionally fouling and cutting the lead to six at one point, the Vipers made six of their eight free throw attempts to close out the game.

Despite the loss, the 905 found a rhythm offensively in the second half as they shot 54 per cent after halftime and overall shot 49.5 per cent for the game.

“We did some good things offensively today; it’s good to see our field goal percentage get up to a really respectable number,” Stackhouse said. “(I) Still would like to get the three ball going a little bit better; with a team that thrives on shooting threes, you’ve got to find a way to make a few.”

The 905 head to Grand Rapids, Michigan, on Friday Dec. 8 to play the Grand Rapids Drive, looking to snap their three game losing streak and get back into the win column. Tip-off is at 7:00pm.