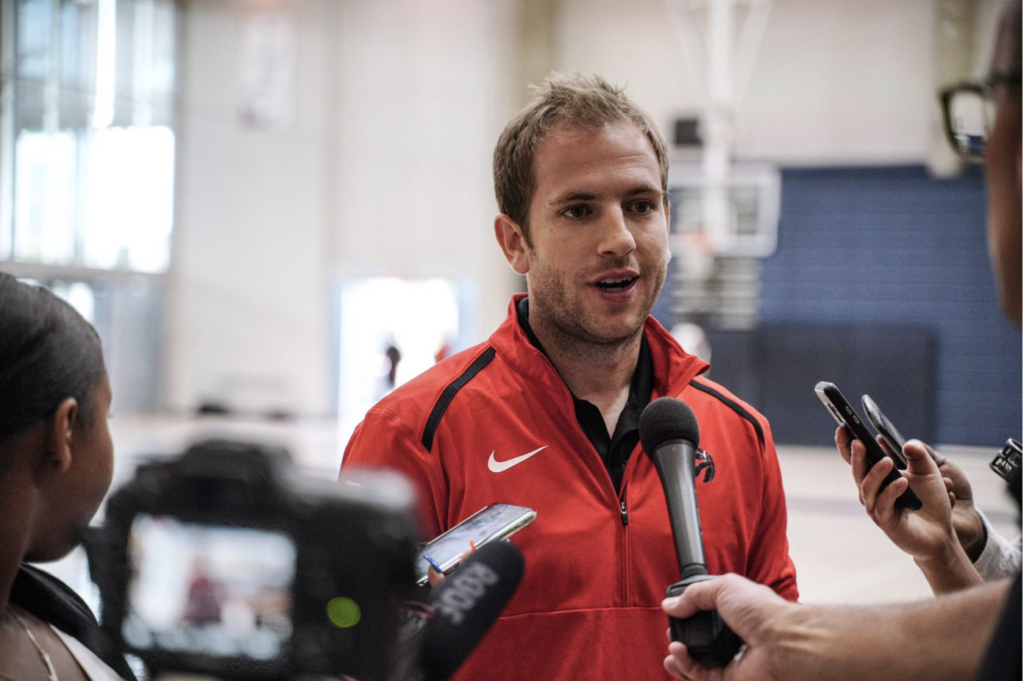 905 GM Chad Sanders, is a winner both on and off the court

By Connor LamontMarch 19, 2021No Comments

Home » On Point Blog » 905 GM Chad Sanders, is a winner both on and off the court

After a regular season that saw his team capture first place in the standings with one of the best offenses in recent G League history, Sanders received the 2020-21 NBA G League Basketball Executive of the Year award on Monday.

The award is voted upon by other basketball executives around the league and recognizes front office individuals for their contributions to their team.

“It is exciting to be recognized,” said Sanders on winning the award. “I wasn’t really expecting the award so it was pretty cool to find out about it.”

Sanders’ fingerprints are all over the 905 team that boasted a league best 12-3 record in the Orlando bubble that wrapped up last week. The Raptors’ led the league in assists and three- point field goal percentage and had standout individual performances from players like Nik Stauskas, Henry Ellenson, Gary Payton II and Alize Johnson- all of whom Sanders acquired or drafted.

Although Sanders deserves a lot of the recognition for the team’s success, he is always quick to point out the guidance and confidence his peers in the Toronto Raptors and Raptors 905 organizations have instilled within him.

“I’m lucky enough to have my name on the award but it definitely goes out to everyone else who is involved who helps the standard for 905 basketball and what we do and the product we put on the court.”

Furthermore, the award has not clouded Sanders’ ultimate goal of winning a title with the 905, as he boldly stated, “We want to win a championship. I’d trade this award for that championship trophy any day and I’d love to bring that back home and have that up in the trophy case in Mississauga.”

COVID-19 forced the G League to play 15 games in 25 days in a bubble at the ESPN Wide World of Sports Complex in Florida. The reduced season shortened the team’s training camp and regular season, which made developing players a little more difficult than in normal circumstances. Despite the challenges, Sanders was impressed with how his coaching staff, players and front office carried themselves during the season.

“Everyone, you know, from our entire front office, everyone cares,” said Sanders. “And it really makes my job so much easier, because I have them right there to talk to on a daily basis with everything that’s going on.”

The experiences Sanders gained during his time in the Dominican, and as a Graduate Assistant under John Calipari at the University of Kentucky were vital to his opportunity with the 905. Although he admittedly was not the most experienced executive, there was no question about his drive and work ethic that helped him find success in the past.

“That’s exactly what Dan [Tolzman, Toronto Raptors Assistant GM] told me on the day when they promoted me was, ‘this is your chance to learn and grow.’ And the only way to do that is by actually being there and having a position to do so.”

Sanders has certainly grown into the role and has helped to continue the Raptors 905 success over the last few years after the team won the league championship in 2017. Despite being placed in a position with great expectations and taking over from someone with big shoes to fill, Sanders was not afraid to rise to the occasion.

“The bar was set high, but that’s what you want. You want to follow someone’s footsteps who did things the right way, and who succeeded,” he said.

The GM award comes after the 905 were selected as the 2019-2020 franchise of the year. The award is given to teams for excellent play on the court, community engagement and for exemplary work from the front office and staff. Sanders has helped to create an environment with the 905 that prioritizes player development both on and off the court.

Sanders believes in the team and organization and the results certainly speak for themselves. Now, the Raptors’ 905 GM is ready to bring all of the bubble success back to Mississauga where the 905 usually play their home games.

“We do miss being home in Mississauga,” he said. “We want to continue to put a good product on the court for the fans that support us and I think that they deserve to be able to watch us and be there with us”

Sanders will get a little bit of down time now that the season has finished, but his focus will now switch to the draft and the NCAA tournament in Indianapolis that is set to begin March 18th. He will then likely return to Tampa Bay to help with the Toronto Raptors who are currently fighting for a playoff spot.

The virus has created a lot of uncertainty, but it is clear the Raptors 905 have a General Manager who cares about the players and the team’s success. Sanders will surely be instrumental in helping the team find more success in the future.