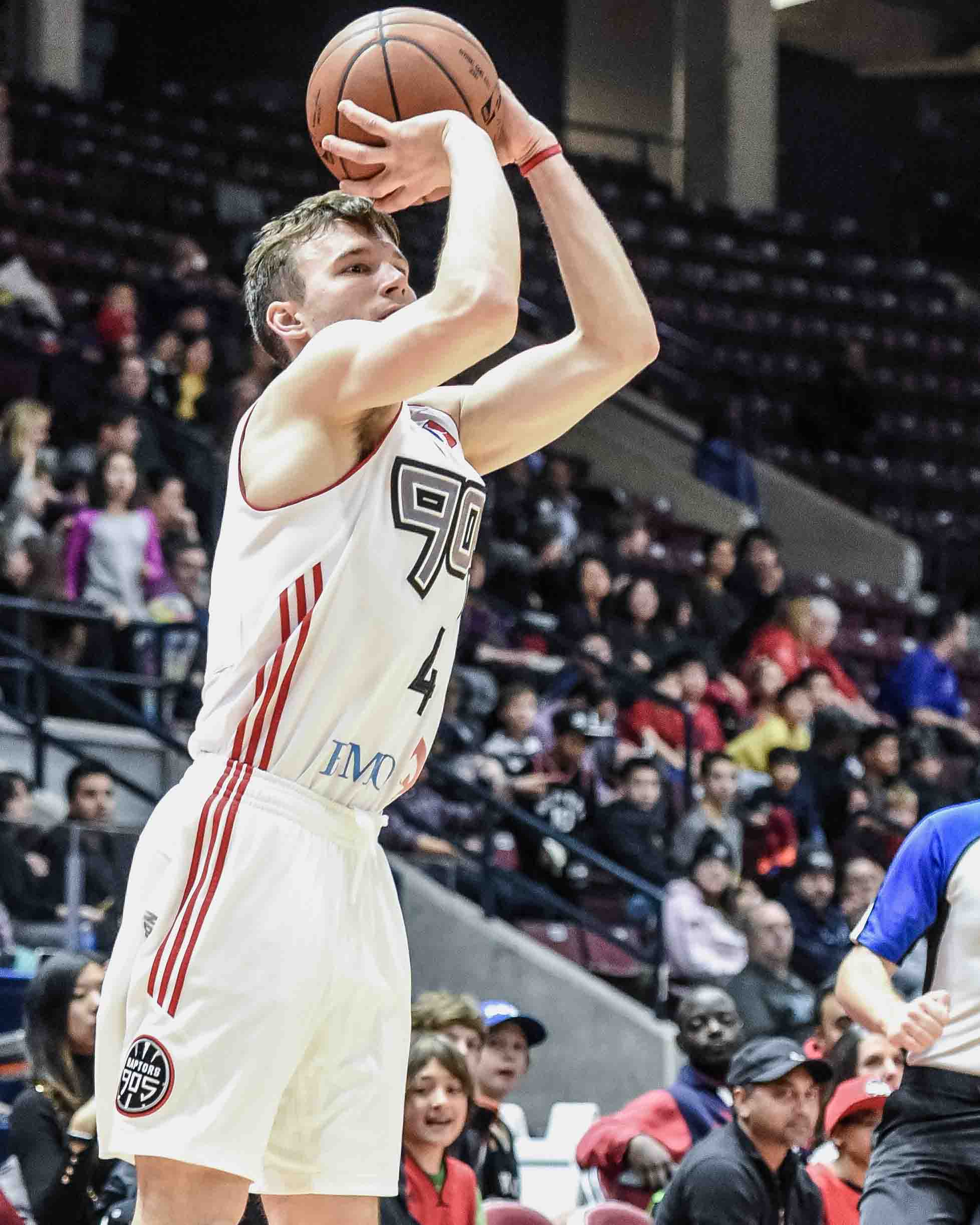 MISSISSAUAGA — Brady Heslip scored 18 points and dished out nine assists as the Raptors 905 defeated the Long Island Nets 120-105 on Saturday afternoon at the Hershey Centre. With the win the 905 have also clinched their first Central Division title, in only their second season in the NBA D League.

Big man Edy Tavares, who anchored the unrelenting defensive effort displayed by the 905, added 18 points to go along with seven rebounds and four blocks while Toronto Raptors’ assignee, Bruno Caboclo, fresh off a shoulder injury, continued his strong play with 16 points and seven rebounds in just over 32 minutes of action.

6-foot-9 forward Pascal Siakam also added to the team’s scoring surge with 18 points while chipping in with seven rebounds, four assists and a cauldron of much-needed energy.

R.J. Hunter led the Nets in the scoring column with 24 points as well as grabbing seven rebounds and six assists in the loss.

The 905 are now 28-1 when leading after the third quarter, and thanks to a 10-2 run midway through the third frame courtesy of a Siakam scoring surge where the big man recorded nine of his 18 points, the home team was able to create distance and eventually push the lead to as many as 19 before the Nets’ early fourth quarter scoring splurge.

Head coach Jerry Stackhouse understands that basketball is a game of runs and teams will continue to push until the final buzzer, but carrying a strong defensive mindset will invariably lead to good things for any team, and that’s what changed for his club in the second half.

“I think the key for us defensively was to come out and set a better tone than we did in the beginning of the game,” said Stackhouse following his team’s 15-point victory over Long Island. “We weren’t bad (in the first half), but we weren’t as sound on our coverage and the things we wanted to do.

“We got back to that in the second half and were able to create some separation.”

The 905 outscored the Nets 31-22 in the third quarter and limited Long Island to 8/19 shooting heading into the final 12-minutes of regulation.

Siakam, who injected much of the energy that helped fuel the scoring attack for his club, said after the game that his role with D-League affiliate club is seismically different than with the Toronto Raptors, but the boundless energy that he brings will remain his lifeblood no matter the circumstance.

“The energy is what I’m known for and even if I’m working on other things I’m just always focusing on what I always have, which is energy and you can’t teach that.”

“Once I got back in the second half (after foul trouble) I just wanted to make my presence known and go out and just be the player that I am.”

Neither team managed to force many stops in the first half, as the 905 shot a blistering 55.1 percent from the field while conceding 50 percent shooting to the Nets. The sharpshooter Hunter led the offensive charge for the visitors, notching 15 first-half points including three triples, but it was the home team that carried the slight edge and momentum heading into the break with Caboclo knocking down a climactic buzzer-beating three pointer to end the half.

The 905 were able to limit the Nets to just 47 percent shooting and forced 19 turnovers by the end of the game. The defensive plays also led to transition points and a season-high 39 assists, which beat the team’s previous high of 30.

Heslip, who was one assist shy of a double-double performance, struggled to find his shot during the game but maintained obedience to his point-guard duties, ultimately engineering the picturesque ball movement that led to the milestone in assists.

Canadian Negus Webster-Chan didn’t play much in the win but had a few notable defensive sequences despite only seeing the floor for seven minutes and change.

The team will complete the back end of a home and home with the Nets Sunday at the Barclays Center in Brooklyn at 6pm est.

Notes: The bench unit has been a mainstay for coach Stackhouse all season, outscoring their opponents in 40 of 44 games coming into this one…. The 905 were without the services of 6-foot-9 forward CJ Leslie and arguably their best defender in Antwaine Wiggins, who are both nursing injuries… Still solidifying its hold atop the Eastern Conference and maintaining dominance as a championship-contending team, the Raptors 905 remain the only team in the NBA D-League to have clinched a playoff berth thus far this season and also carry the best home and away record in the association.