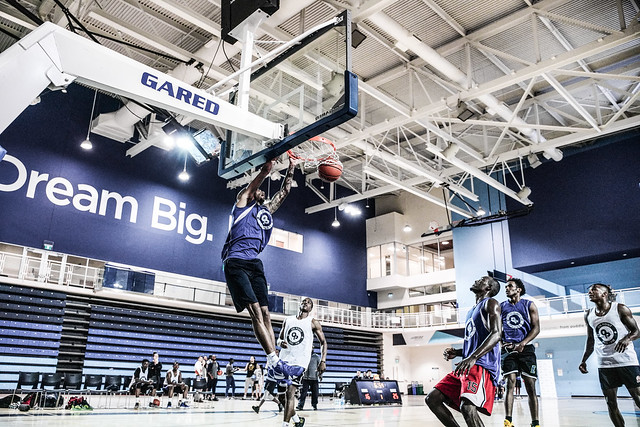 (Toronto, ON) As the third ever On Point Summer Pro-Am gets underway, we are two games into what is a shortened season this year.

The defending champion Toben is off to a perfect start, winning both of their games while On Point and X-Men are 1-1 with major playoff implications in their final games.

Starting 5, although unlikely to secure a postseason berth being winless in two games, is putting up a fight and could potentially play spoiler.

Here is an in-depth at the teams in play thus far.

The reigning champion Toben has wasted no time thus far, winning both of their regular season games to start off their title defence over Team Starting 5 (91-66) and Team X-Men (64-61).

One major catalyst during their two wins has been forward Denny McDonald, averaging 19.5 ppg. and 6.0 rpg. Plus their defence is tops in terms of opponent points per game (63.5), including limiting X-Men to just 14 second half points last Sunday. Toben also leads the league with 32 assists through two games as well.

If there is one thing that Toben needs to improve upon, however, it would be how they start the game. In both games, they fell behind by double digits, including having to overcome a 17-point deficit against Team X-Men.

Despite hosting the tournament, head coach Ryan Xavier has yet to grasp that elusive Pro-Am title in the two years since the league was formed. With the lineup that he has right now, he is poised to at least make some serious noise.

Team X-Men had a difficult test ahead of them to start off the season as they were to play last year’s finalists in On Point and Toben. They led nearly wire-to-wire in their 93-86 win over On Point and held a double-digit lead against Toben before falling, 64-61.

Late game execution on the offensive end has been a thorn in the side of the X-Men, especially in that game against Toben, where a cold shooting second half came back to haunt them as there was no single person who was hot enough to create for himself and get a bucket down the stretch.

But their size on the interior has been crucial in limiting teams to just one shot as X-Men leads the league in rebounds per game (38.0)

After winning the inaugural title and finishing in second place the following year, Team On Point is in serious danger of not even getting a chance of playing for a championship.

Like Toben, slow starts have been a problem for On Point, being down for much of the game against X-Men and being down seven at the half against Starting 5.

However, offense has not been the issue whatsoever as they lead the league in scoring (86.5 ppg) and had all six of their players score in double figures against Starting 5 to keep their championship hopes alive.

Jamal Reynolds’ all-around game has been on full display in these two games, averaging 18.5 ppg, 5.0 rpg, and 4.5 apg. On Point also possesses guards who can heat up in a hurry in Darnell Landon and newly acquired Chris Parker.

It has been a tale of two halves… literally for the Starting 5. Except they have the opposite problem of what has plagued Toben and On Point.

Referring to their team name, Starting 5 came out of the gate strong in both games, holding a double-digit lead over Toben in the first half and a seven point halftime lead against On Point on the strength of hot perimeter shooting, led by guards Reggie Perez and Devin Johnson. As a result, Starting 5 leads the league in triples made with 19 through two games.

However, a game consists of two halves and the second half has not been kind to this relatively young squad. Starting 5 have been outscored by a combined 40 points in both second halves as they had a hard time generating consistency on both ends on the floor.

Robert Nortmann’s presence on the interior gives Starting 5 a solid threat on the low block and his veteran presence has helped this team through trying moments. Reggie Perez has been red hot from downtown, shooting 43.5 per cent from that distance.

All four teams have not officially clinched a playoff spot just yet as there are numerous scenarios that could go down after each team finishes their last game of the season on July 24. On Point plays a must-win game against Toben in order to stay alive while X-Men look to solidify their chances with a win over Starting 5, who will look to play spoiler.

Written by Kajan Thiruthanikasalam. Check out Kajan on Twitter