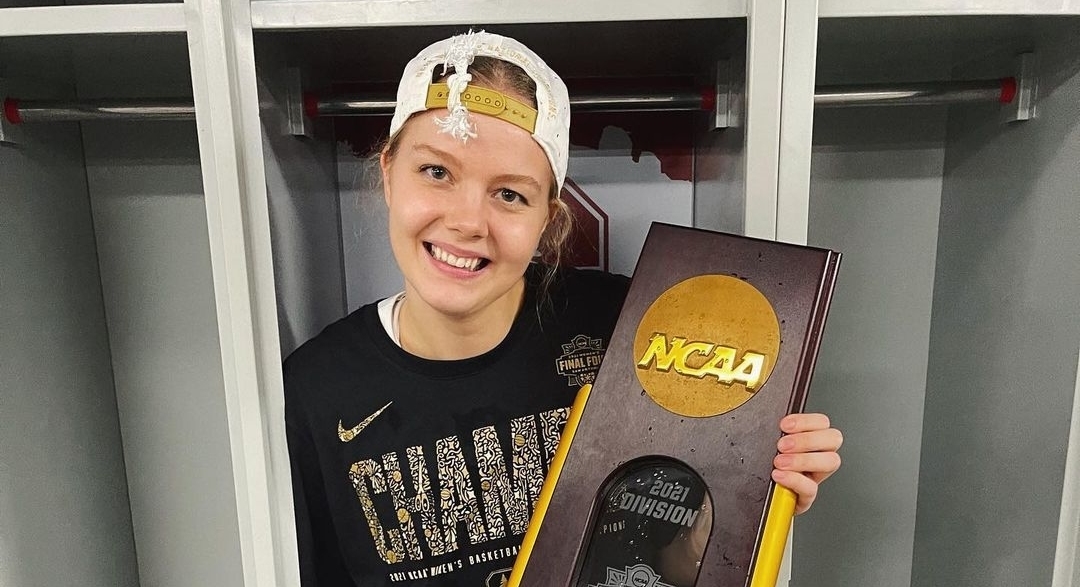 By David RoubenApril 11, 2021No Comments

Alyssa Jerome’s basketball journey has been a long and winding one. When she joined North Toronto in JUEL, she was the youngest player. All the while, she was representing her country at four different FIBA tournaments as well as the Pan Am Games. And her senior season at Stanford was finally capped off by winning the NCAA Tournament, a moment that Jerome says she still hasn’t fully registered.

The 2021 Women’s Final Four was an historic occasion for Canadian basketball, as each team had a Canadian player on its roster. Aaliyah Edwards of UConn and Laeticia Amihere of South Carolina were the names that generated the most buzz, but it was Shaina Pellington’s Arizona Wildcats and Jerome’s Cardinal that squared off in the Championship Game. And for Jerome, getting to cross paths with her former teammate on the big stage wasn’t lost on her.

“We played on national teams together and trained together,” Jerome said about Pellington in an exclusive to On Point Basketball. “Just kind of seeing that we made it to a national championship, you know, I congratulated her after the game.”

That display of sportsmanship perfectly encapsulates who Jerome is as a person and an athlete.

Pellington’s stats in the championship game jumped off the page. In 30 minutes, she racked up 15 points, seven rebounds and three steals. Jerome only played five minutes in the Championship Game, and 32 minutes total across four tournament games.

But the influence she has on her team, according to Stanford coach Tara VanDerveer, is an intangible one that isn’t captured by a box score.

enacted a ban on all athletic activities, which forced Stanford to play on the road for over nine weeks. That tough stretch can take a toll on any athlete, and it could’ve easily broken the Cardinal. But a big reason why they didn’t break was Jerome, who kept things light.

“We were in a bunch of hotels and we all had our own rooms because of COVID, but we still made a really big effort of always eating meals together outside or having a socially distanced movie night, and things like that just to keep the morale up and stay close.”

Jerome calculated that their team ended up spending 87 days straight on the road during the season.

Shortly after that stretch, Jerome went on to have the best game of her collegiate career, dropping 14 points and hitting four three-pointers against Oregon State on the road. Coach VanDerveer highlighted how important that was for the rest of the team during Stanford’s Senior Day ceremony.

However, as all great leaders do, Jerome acknowledges she couldn’t have done it all by herself. The bond that she shares with Stanford’s two other seniors, Kiana Williams and Anna Wilson, helped get her through the season, and they played a part in boosting the team’s overall morale when they were all separated.

“When we all got sent home in the summer, we had Zoom sessions with the team every week, the three of us were on Zoom every day. And we really knew that this could be something really special, and we worked hard for it.

“This team, truly, we each care about one another, and we’re really, really close, which made … this group just an easy group to lead.”

Anna’s big brother, Russell Wilson, had a hand in that too, as he played the role of cheerleader during the Tournament very well.

Jerome has never forgotten her roots. Her leadership on the court can easily be traced back to her coaches and mentors from Toronto. When O’Neil Kamaka of Oakwood taught her in PE during Grades 7 and 8, he called her shy and quiet, but said her skill popped off right away.

“I didn’t realize how good she was at basketball until we did the basketball unit,” Kamaka said when recalling those early days. “She was cooking everybody, girls and boys, and I was like ‘Okay!’ Even when we did staff vs. students, she was the go-to on the team.

“She always stuck out just from how she carried herself and how nice she was, and how respectful she was.”

During her High School years at Harbord Collegiate Institute, she was also playing competitive volleyball and soccer. But her time with North Toronto JUEL helped her really fall in love with basketball.

Her coach at North Toronto, Dave Bethune, remembers the way she stepped into a leadership role once she got to Grade 11.

“She always seemed like she was in control, even if things were falling apart around us, which was always refreshing,” Bethune said. That came around again in a big way, as not even COVID restrictions could deter Jerome.

“As she got more involved with her leadership, she became a little bit more vocal and was helping support her teammates that were struggling… and I believe she enjoyed it, she took on that added responsibility.”

Jerome says the biggest thing her coaches instilled in her was playing with joy, and for fun, so as to not see sports as a drag.

“It’s definitely a grind [with] all the practices and workouts and everything. But always kind of trying to keep that perspective has been huge.”

Bethune also helped her balance her responsibilities with Canada Basketball during that time, and said he tried to reinforce some of the things that they were doing with her. When it came time to make her college commitment, he knew that Stanford was the best route for her.