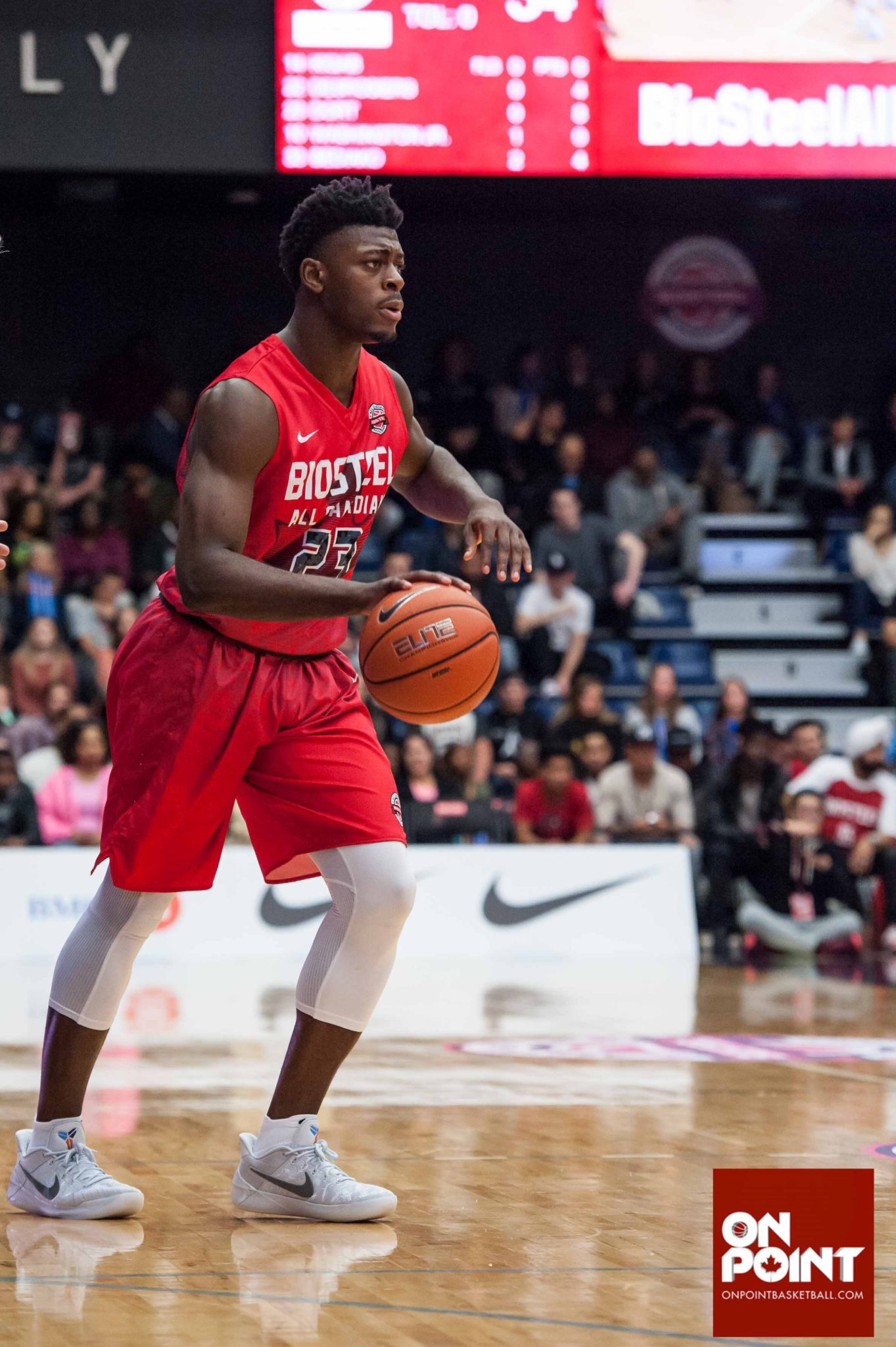 TORONTO— Basketball is soaring to extraordinary heights across Canada, and 24 of the most prominent high-school stars are largely responsible for the surge.

The third-annual BioSteel All-Canadian Game took place at the University of Toronto’s Goldring Centre before a packed crowd on Monday.

In a game where the score fluctuated as much as any entertaining game should, Team Red was able to stage a rally and eventually come away with the 153-135 win over Team White.

Luguentz Dort was named MVP of Team Red, finishing the night with 30 points (12/16 FG) and a series of thunderous jams that injected roars across the arena throughout the game.

Dort was one of three Quebec players who participated in the contest, and yet another budding superstar rising through the ranks and onto the radar of college and pro scouts. Basketball is booming in Canada, and it’s something that he says will continue to flourish.

“It’s getting better every year, it’s my first time here (in Toronto),” said Dort, who plays at Conrad Academy in Florida. “Man, there’s a lot of talent here, we’re coming up to the (United States). (We) just need to work harder a little bit more and we’ll beat them.”

Matur Maker, brother of NBA rookie Thon Maker (Milwaukee Bucks), earned the MVP award for Team White, notching 25 points to go along with six rebounds. He showed glimpses of quickness and agility not often seen from a 6-foot-10 forward, even crashing the boards to create a string of second-chance opportunities. There was no doubt the Sudanese-Australian national treated this game with a sense of pride, and it showed through his performance.

“I came in the game playing like it was my last, because it was my last,” said Maker, who should be expected to make a decision soon regarding his collegiate basketball plans. “I had a different mindset than everybody else.”

Although not Canadian, Maker has played his last few years in the country and has seen firsthand the evolution of basketball on a national scale.

“It’s big for Canada,” he said. “You see Wiggins, Thon…it’s big, and it’s growing for Canada.”

The event has grown exponentially over the past three years, even selling out for the first time, which is phenomenal for a High School event. In front of stars like the Toronto Blue Jays’ Marcus Stroman and Ryan Goins, as well as current superstar DeMar DeRozan of the Toronto Raptors, the turn out for the game was certainly impressive, and it’s something head coach of Team Red Chris Cheng (Nippissing University men’s basketball head coach) says is a testament to how much Canadian coaches have grown in the last decade.

“I think part of the growth is the commitment of coaches,” he said in a post-game scrum. “The coaches are really going well and beyond than what’s (been) done before. They’re getting opportunities. It starts with the coach, starts with player and then the community supporting that program.”

To be a part of the developmental process, says Cheng, is a special type of honour.

“It’s amazing. For me to be involved with the provincial team program and Canada basketball development programs is even more rewarding,” he said. “To see these young kids grow and influence the younger kids and cycle through, it’s amazing to see the progression. It’s amazing to see our curriculum as basketball progresses. It’s great to see the community progress. It’s up and coming and games like this, it’s unbelievable.”

“I think part of the (growth) is the commitment of coaches. The coaches are really going well.”

Head Coach of Team White John Campbell, who spends most of his time leading the University of Toronto’s men’s basketball team, points to the success of the various basketball organizations and leagues for the upsurge in Canada.

“I think everyone knows right now what’s happening with the game of basketball in Canada, specifically in Toronto,” he said following the game in the post-game scrum. “For us we’re situated in a great spot, we have so much talent within miles of (the University of Toronto) campus. It’s up to us to sort of maximize that right now, and I think you see some growth in our program, but really just to be involved.”

The Raptors are about to go on a great run, and then to be able to see (the North Pole Hoops Showcase), the whole (Canadian Youth Basketball League), and all kinds of other events right now, there’s just so much positive happening with basketball in Canada, to be here is exciting.”

As per TSN, Junior Farquhar of Côte-St-Luc, Que. was chosen to appear in the game but was unable to take part due to injury…. Shai Alexander of Hamilton, Ont., Lindell Wigginton of North Preston, N.S., and RJ Barrett of Mississauga, Ont. were also chosen to participate in the game but were unable to due to schedule conflicts or academic obligations.