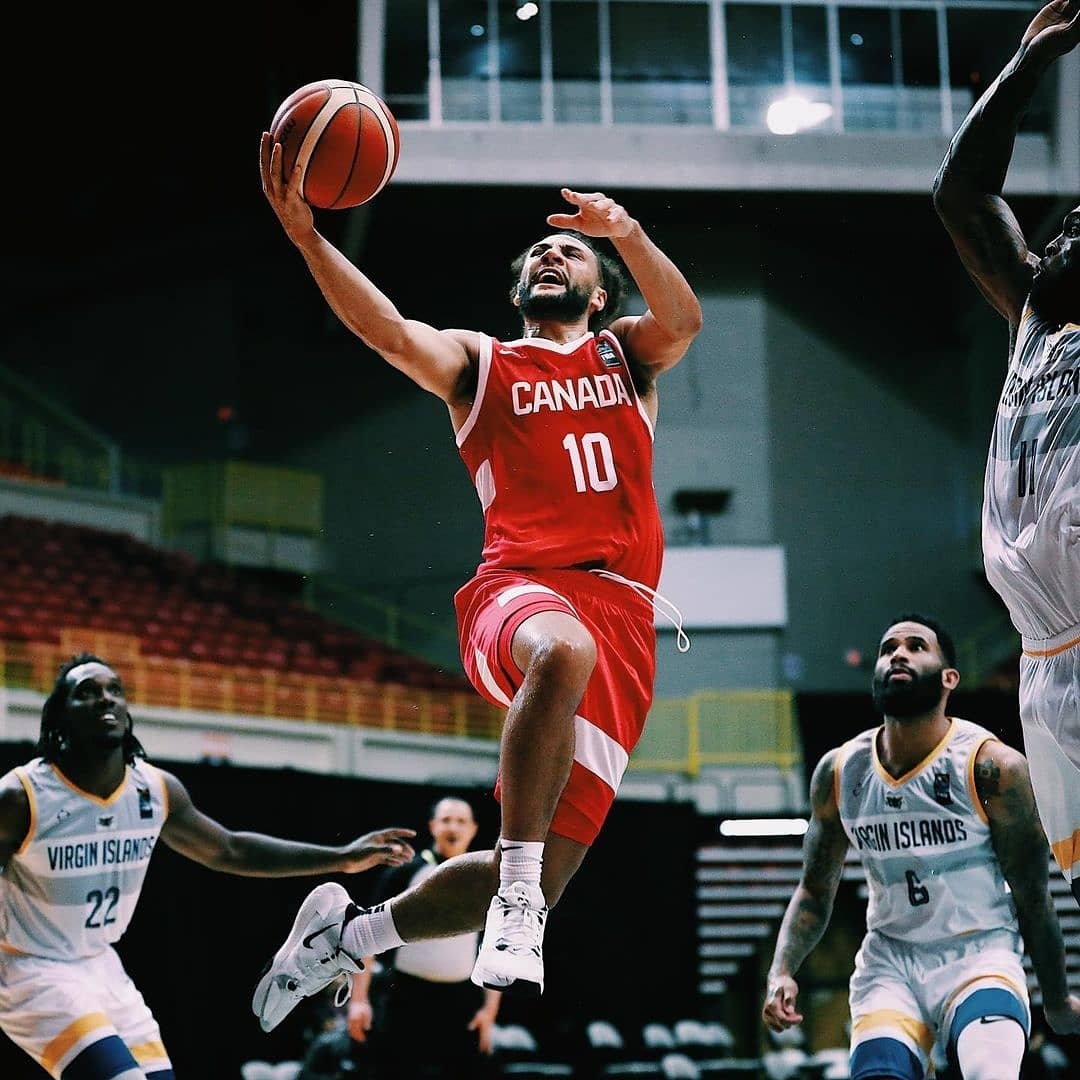 SAN JUAN, Puerto Rico (February 20, 2021) – The Canadian Senior Men’s National Team officially advanced to the FIBA AmeriCup 2022 with a 95-90 victory over the U.S. Virgin Islands on Saturday afternoon. Canada recorded its second consecutive win despite a 44-point effort from Walter Hodge and a strong second-half push from the Virgin Islands that erased an 18-point third-quarter lead.

“Our goal was to come down here, win both games and clinch the spot and that’s what we’ve done,” head coach Gordie Herbert said. “We knew [the] Virgin Islands play really good basketball, give them credit. We played two very tough games, but give our players a lot of credit [too]. We faced a lot of adversity and we showed a lot of mental toughness dealing with it. I think this will make us stronger going forward.”

Canada was led by Kaza Kajami-Keane’s 27-point, nine-assist effort in the win, while Anthony Bennett added 19 points and Johnny Berhanemeskel made all three of his three-point attempts in the final 5:25 of the game as Canada weathered the furious push from Hodge and the U.S. Virgin Islands to take the win.

“I think it shows how resilient us as a country [is],” Kajami-Keane said. “It shows how much we all love this country, how we’re willing to sacrifice every day and do whatever it takes to help this country be successful.”

After leading by eight at the half, Canada extended its lead to 58-40 with 7:55 remaining in the third. From there, the Virgin Islands closed the quarter on a 24-10 run to trim Canada’s lead to just four heading into the fourth. Hodge led the way for the U.S. Virgin Islands, scoring 15 points in the quarter.

“Walter Hodge is one of the greatest players I’ve ever played against in my European career so far,” Kajami-Keane said “I’ve got to give it up to the Virgin Islands for competing as they did. That’s a very good team on the other side. They play hard, they play together.”

Hodge scored the first six points for the U.S. Virgin Islands in the fourth and then assisted on a jumper from Ivan Aska to tie the game at 72 with 7:34 remaining. Looking for an offensive boost, Herbert inserted Berhanemeskel into the game. The move paid off as Berhanemeskel connected on back-to-back threes to push Canada’s lead back to seven.

“To me that really showed what a team is,” Herbert said. “A kid [in Behanemeskel] that hadn’t played for 34 minutes in the basketball game, did not dress for the first game, came in and played against the zone and he made three threes. Those were huge plays for us.”

Though the Virgin Islands got within three with two minutes remaining, a dunk from Owen Klassen and the third three from Berhanemeskel gave Canada an eight-point lead with a minute remaining. Hodge gave it his best effort, scoring on a layup and then a jumper, but the U.S. Virgin Islands couldn’t get closer than four points as a free throw from Kajami-Keane with 15 seconds remaining sealed the victory for Canada.

The path to Saturday’s victory was an interesting one for Canada. Though the team was scheduled to play a pair of games against Cuba this week, the schedule was adjusted after Cuba’s failure to reach San Juan, Puerto Rico.

“Give our team credit, they came in with a great attitude, worked hard in practice and they picked up stuff really quick,” Herbert said. “More than anything, it was their mental toughness to come into this kind of situation and play. Today I think we showed even more mental toughness in the final five, six minutes of the basketball game.”

For Kajami-Keane, the only thing that mattered was getting the win.

“Anytime you put Canada Basketball on your chest you have to go out and give 110 percent,” he said. “It’s an honour. This country has done wonders for me and all of us in that locker room.”