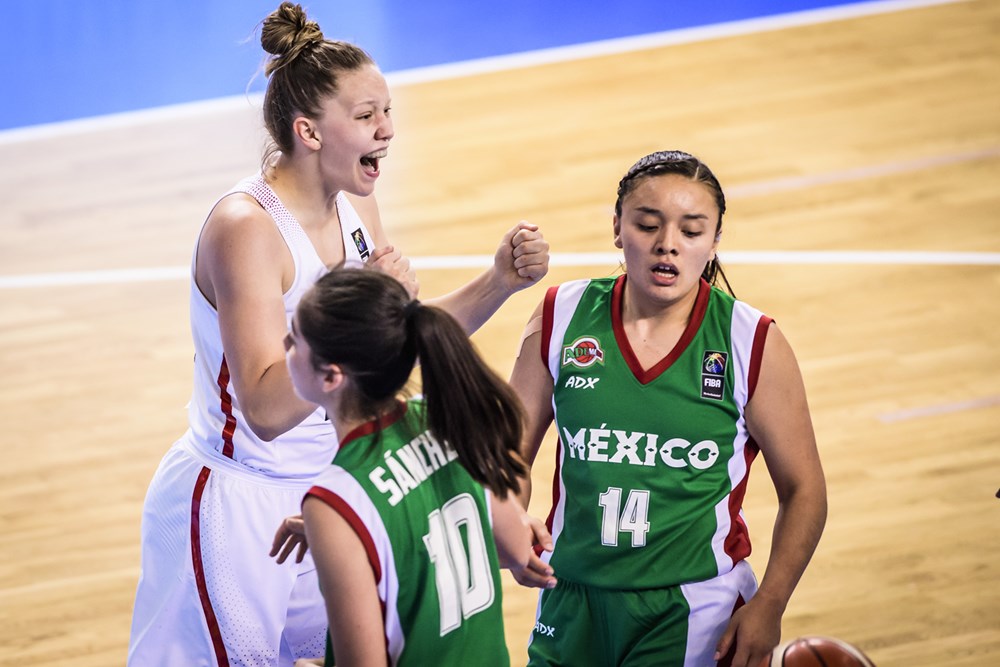 By Mark WilliamsonJuly 27, 2017No Comments

Consistent producer for Canada, Laeticia Amihere got the start in place of Shaina Pellington, who dressed for the game but rested after getting hit hard on a drive attempt late against Latvia.

Canada plays a very different style with Amihere on the floor and the results are usually very positive as they were all over Mexico in the first, not their typical slower start. The Mexicans had no answer for Amihere or Hailey Brown inside as the duo combined for twelve points, seven rebound in the opening quarter.

Canada was up 11-3 when sharp shooting Aislinn Konig, returning to form, connected on her first three-pointer of the game, after hitting 10 triples vs. Latvia, expanding Canada’s lead even further.

Jerome, Canada’s captain, picked up the scoring in the second quarter as Canada shot their best percentage of the tournament in the first half.

Canada’s defense was impressive in the first half forcing Mexico to consistently take bad shots, while also recording three steals and four blocks.

Unfortunately for Canada, Amihere suffered an eye injury in the second quarter and didn’t return for precautionary reasons.

In their previous games vs. France and Latvia, Canada ran a tighter rotation, but with a 25-point lead at halftime on Mexico, the minutes were pretty spread out.

Angela Bongomin and Summer Masikewich made sure there was no drop off as they continued the Canadian dominance in the paint. Both cleaned up on the boards and produced baskets while combining for 20 points and 14 rebounds, shooting 8/12 from the field in the game.

Mexico was couldn’t find any offence in the third, collecting five points, just like in the first.  Shooting 25 percent from the field can have you definitely fighting an uphill battle, especially when you’re undersized.

Canada finally got on the board with one made free throw by Masikewich with 2:05 remaining but their defence faltered, giving up easy buckets and while they couldn’t get any of their own.

Luckily for Canada, they played three solid quarters and Mexico only played one.

Canada, while dominant for the most part have to remember to keep the foot on the throttle when up.

The weaknesses for Canada this tournament improved slightly today vs. Mexico, as they slightly lowered their turnovers (18), shot better from the charity stripe (57.1%) and of course continued to dominate the glass (56-35).

Canada will play the winner of China on Friday, July 28 at 10:00am est. in the Women’s FIBA U19 World Cup quarterfinals.