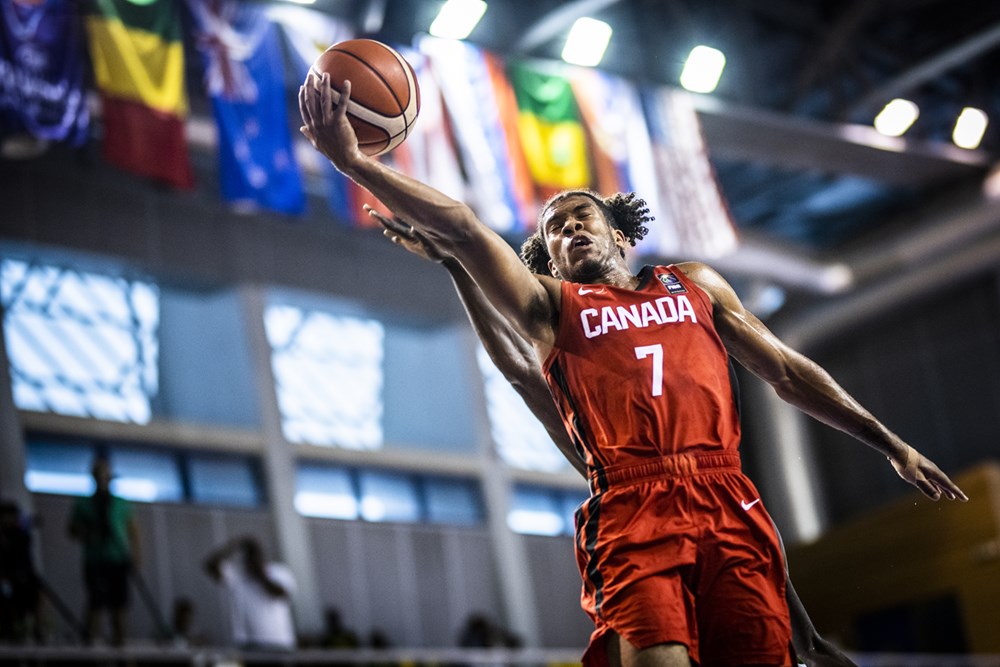 HERAKLION, GREECE (July 3, 2019) – Canada defeated Senegal 90-79 on Wednesday evening to advance to the quarter-finals at the FIBA U19 Basketball World Cup 2019.

A.J. Lawson led the Canadians in today’s win with 31 points, seven rebounds and four assists. This is the fourth highest points scored in a single game during this year’s FIBA U19 World Cup. Damion Squire delivered 18 points, while Charles Bediako had 10 points and six rebounds for Canada. Biram Faye had 30 points in the loss for Senegal.

Foreshadowing his overall game performance, Lawson made a huge statement dunking in the first three seconds of the game. This dunk led to an 8-0 scoring run which he single-handedly delivered. However, Senegal answered and found their way back into the game with an 8-0 run of their own. The two teams traded baskets for much of the opening frame before a three-point shot from Lawson in the final seconds helped the Canadians end the quarter up 23-18.

The second quarter started off in Canada’s favour as they increased their lead to seven. Senegal continued to hang around as back-to-back three-pointers with just over three minutes to go in the half, made it a one-point game. Shortly after Senegal took the lead, Joel Brown drained a three-pointer to bring Canada back even. One last dunk from Lawson before the quarter ended helped the Canadians enter halftime with a 40-38 advantage.

Reminiscent of the first quarter, Lawson opened up the second half with a big dunk. Team Canada worked to grow their lead throughout the quarter, finding themselves up by 15 on two separate occasions, for their biggest lead since the first quarter. The Canadians carried an 11-point advantage, 70-59, into the fourth quarter.

Canada maintained their lead for the entire fourth quarter with their advantage never dropping below five points. Up by eight with one last possession and just over 10 seconds on the clock, Squire drained a three to seal the 90-79 victory.

Canada will face France in the quarter-finals on Friday, July 5, 2019, at 1:30 PM EDT. Fans can catch the game streaming live on DAZN.