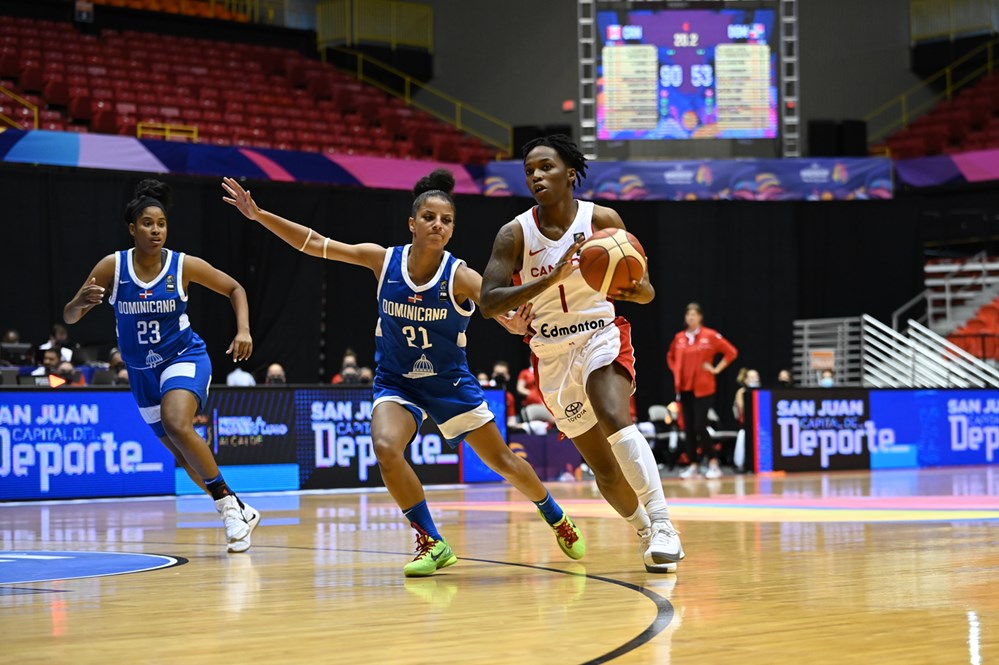 With a 90-53 victory over the Dominican Republic, the Canadian women’s senior basketball team has secured their spot for the 2022 FIBA World Cup Qualifiers and are on to the Women’s AmeriCup semi-finals.

Canada opened the game with a 12-0 run before the Dominicans responded to cut the lead down to just four. The game was never close after that run, while the Dominican Republic battled to keep it from getting too far out of reach, Canada had their pick of shots throughout the game and once again finished shooting more than 40 per cent from deep.

“That three-point shot is such a valuable one in the game today, so to be able to knock down some threes at a pretty good clip has been a great sign for us,” said Canadian head coach Lisa Thomaidis. “It’s certainly allowing us to spread the floor and then identify and get the ball inside as well with some single coverage.”

Contributing to that was Aislinn Konig, who continued her blistering hot shooting performance with a near-perfect seven-for-nine from beyond the arc for 23 points. Konig has averaged better than 41 per cent from three coming into this game and has been one of the central figures in developing Canada’s new up-tempo offence.

Thomaidis said the team’s dominance from three-point land provided a glimpse into what the offensive production she expects from the team going into the Olympics.

“We’re really emphasizing those wide open shots, those are the ones we value the highest so it’s a matter of us finding them and generating them and I thought we did a good job of that today,” said Thomaidis.

“Coming into training camp, we had a lot of missing pieces that we had to put together,” said Aaliyah Edwards, who had four points and six rebounds.

“I think as we move from training camp and into this tournament we’re really getting a feel for our team mates and the offence and defence that we’re trying to run so that we can be more successful down the road and later in the summer.”

On the other side of the bracket, the expected matchup between Brazil and the United States is shaping with the American’s 97-46 win over the U.S. Virgin Islands. Brazil faces Venezuela later tonight.

The Canadians will face the winner of the Puerto Rico and Colombia quarter-final game at 9:10 p.m. EST on DAZN in the semi-finals.

“We’re a confident group, I think we believe in each other and what our team’s doing and really our focus is just on us getting better each game,” said Thomaidis. “Certainly we’re feeling good going into the semi-final, looking forward to that match up and looking forward to a tough game.”