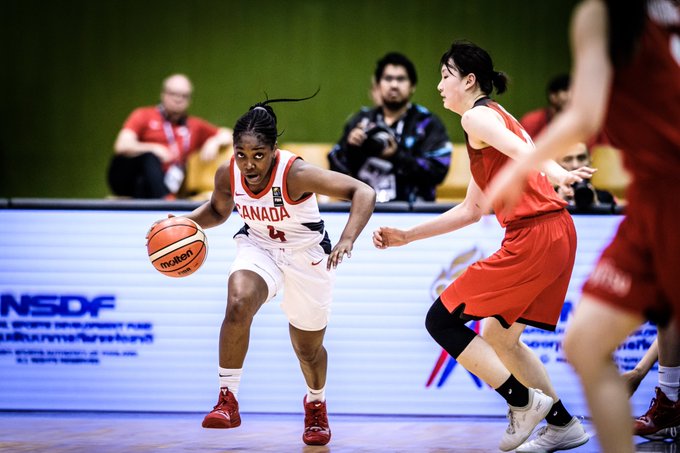 Aaliyah Edwards was Canada’s top performer of the game with 12 points and seven rebounds. Matching Edwards in points was Christina Morra, while Brynn Masikewich matched Edwards in rebounds and contributed 10 points of her own. Nanako Todo recorded a game-high 14 points in the loss for Japan.

Japan started the game in the lead up 10-3 within the first three minutes. Canada began to chip away at the deficit and by the end of the first quarter, Canada had turned the seven-point difference to just three points. At the buzzer, Team Canada was only down 16-13.

Within the first few seconds of the second quarter, Team Canada had made it a one-point game thanks to a jump shot from Morra. Canada first took the lead after Edwards drew the foul and made both free throws making the score 17-16 at the 8:53 mark. They remained in the lead for the remainder of the quarter and entered the halftime up 31-24.

Canada continued to lead to start the third quarter, but halfway through the frame, Japan cut the lead down to just five points. By the time just two minutes remained, Canada had managed to extend their lead to 13 points. Though in those two minutes, Japan cut the lead once again making it a four-point difference. Canada entered the fourth quarter up 49-45.

Three minutes into the fourth quarter, the two teams were tied 53-53. Japan took the lead after a good three-point shot, but Canada did not back down. Shortly after, Masikewich’s own three tied the two teams once again. Canada remained in the lead for the rest of the game as Japan trailed close behind. The two teams fought hard until the buzzer, but ultimately Canada came out on top.

Canada earned a historic bronze medal at the FIBA U19 Women’s Basketball World Cup 2017 in Udine and Cividale del Friuli, Italy. The bronze was Canada’s first medal in eight appearances at the event since it began in 1985. Last summer, the team earned a silver medal at the FIBA U18 Women’s Americas Championship 2018 in Mexico City, Mexico. Canada is currently ranked 4th worldwide in the FIBA World Ranking Presented by NIKE.

“There were a lot of runs in that game and I felt like we did a good job of staying composed and working through different situations. We were successful when we got the ball inside and our bench gave us some good production.” – Head Coach, Claire Meadows

Canada will take on China in the 5-6 Classification Round tomorrow at 3:30 AM ET. Fans can catch the game streaming live on FIBA YouTube or the Canada