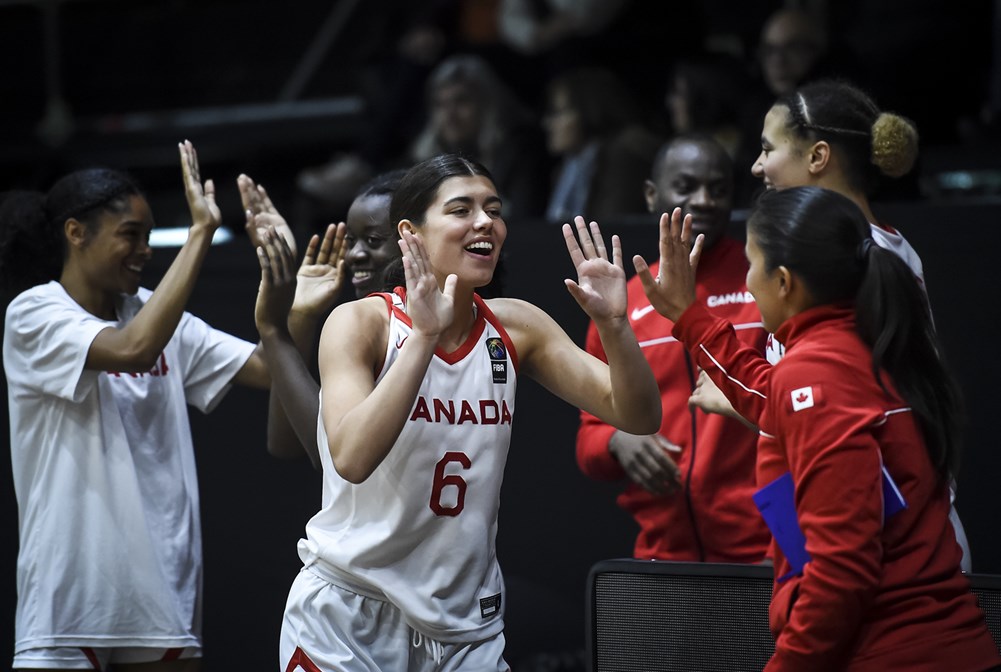 Home » On Point Blog » Canada demolishes El Salvador 89-24 to advance to U18 Women’s Americas semis, qualifying for 2023 U19 Worlds in the process

The Canadian U18 women’s team have started the bracket phase of the FIBA U18 Women’s Americas Championship with a massive 89-24 victory over El Salvador.

The win also qualifies Canada for the U19 FIBA Women’s Basketball World Cup in Madrid, Spain which takes place July 15-23, 2023. Canada finished fifth in the last installment of the event in 2021.

The 65-point win is the second largest margin of victory in the tournament so far, only second to USA’s 75-point win over El Salvador in Group B.

Canada started the game pressing El Salvador’s ball handlers hard but started slowly out of the gate as they missed three shots at the rim as Skylar Forbes’ jump shot became wedged between the rim and the backboard. Lemyah Hylton finally snapped the two-and-a-half-minute scoreless streak shortly after to bring Canada back into the game where they would take their first lead six minutes into the game and would expand the lead to 25-12 before the end of the quarter.

The lead ballooned in the second quarter with Canada’s defence holding El Salvador to just three points while getting contributions from throughout the lineup. Every Canadian who touched the floor had at least four points.

Emma Koabel and Fatima Diakhaté took over in the second half with each having 14 points and leading all scorers. Diakhaté also dominated the boards with 12 rebounds.

The win sets up a semi-finals rematch with Argentina who are coming off a 65-55 victory over Columbia in the quarterfinals. Canada had a dominant 89-55 showing in the previous match up during group phase.  Brazil will be taking on America on the other side of the bracket, all games will be available on FIBA’s YouTube channel.