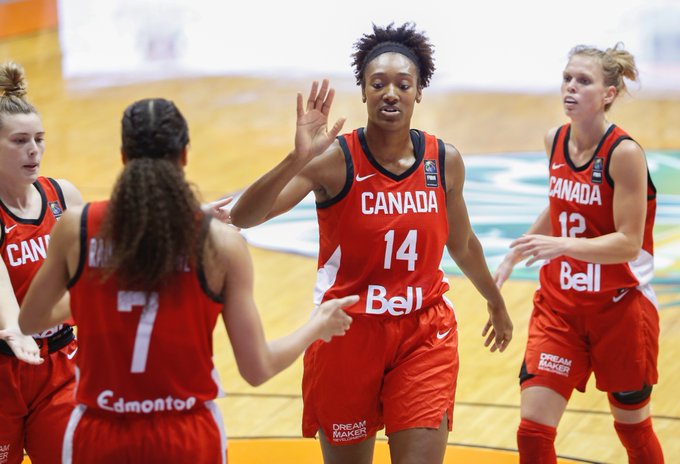 Jamie Scott led the Canadians with a game-high 21 points, while Kayla Alexander recorded a double-double, 18 points and a game-high 11 rebounds. Nayo Raincock-Ekunwe and Bridget Carleton both finished with 15 points each for Canada. Jacqueline Luna-Castro scored 12 points for Mexico in the loss.

Canada led Mexico out the gate going on a 9-0 run to start the game. By the halfway mark, Mexico had only scored three points when Scott’s back-to-back threes extended the lead to 25-3. By the end of the quarter, eight Canadians had contributed to the 31-18 advantage.

Alexander began to heat up to start the second quarter, scoring eight straight points for Canada. With Canada leading 39-18, Mexico was forced to take a timeout to regroup. After the short break, Canada remained on top, holding Mexico to 18 for the majority of the second quarter. With less than a minute to go in the half, Mexico’s Jazmin Valenzuela drew a foul and hit both free throw bringing the Mexicans up to 20. With less than 10 seconds to go, Canada’s Bridget Carleton’s three-point attempt was no good and Canada entered the half up 51-20.

Canada continued to remain dominant throughout the third quarter. Although Mexico scored their most points in a quarter, Canada still outscored them 27-21. By the end of the quarter, Canada led Mexico 78-41 and Alexander had shot a perfect 7-for-7.

In the fourth quarter, Canada finished just as they started, dropping 31 points and defeating Mexico 109-53. Every Canadian who played contributed to Canada’s final score, including the team’s youngest player, Aaliyah Edwards, who scored 10 points in her FIBA AmeriCup debut.

Entering the tournament as two-time defending FIBA AmeriCup champions, Canada has found a spot on the podium in seven of the last eight competitions dating back to the 2003 FIBA Americas Championship for Women in Culiacan, Mexico.

The Canadians will face Cuba on Monday, September 23 at 5:30 PM ET. Fans in Canada can catch the game streaming live on DAZN.

“Good first game and we have plenty to build on from today.  It was great to be back on the court with contributions from everyone against Mexico. Looking forward to building on the momentum together moving forward at the tournament.” – Jamie Scott

“It was great to finally get out and play an opponent. We had solid contributions from everyone on the team and impressive debuts by both Aaliyah and Kayla.” – Lisa Thomaidis