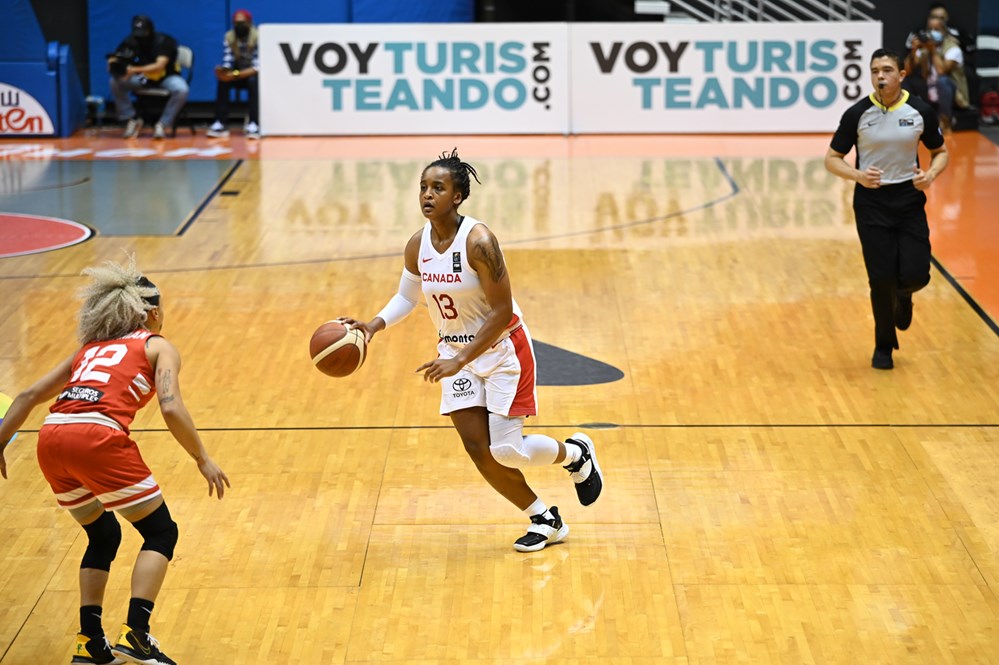 For a brief moment it looked like Canada may have a chance to tie or put away the Olympic bound Puerto Ricans with just seconds remaining as Laeticia Amihere reached out to grab a missed free throw from Pamela Rosado but the 35-year-old guard hustled and stole Canada’s chances from Amihere’s hands to head back to the line and ice the game.

With the 65-61 loss to the host nation Puerto Rico, Canada’s undefeated streak at the AmeriCup has come to an end, and they’ll be facing Brazil once again in the bronze medal game at 6:10 p.m. on Saturday.

Puerto Rico’s head coach Gerardo Batista’s decision to switch every screen on the perimeter and pressure shooters took the Canadians off the three-point line for the first time this AmeriCup, holding the leading three-point offence to just 11 per cent shooting from deep.

Canada also had trouble converting from the free-throw line shooting just 11 of 22 from the stripe.

“We certainly had our shooting woes tonight, it’s unfortunate we had a number of people just kind of go cold after a number of great performances throughout the tournament,” said Thomaidis. “I thought we had a lot of looks, certainly from the free throw line they’re open looks. Just couldn’t get them to go down tonight unfortunately.”

The Puerto Rican home-court advantage was the loudest the Roberto Clemente Coliseum has been during a Canadian game so far. The sparse crowd filled the arena with air horns and chants that seemed to take Canada out of their rhythm early in the game leading to multiple shot clock violations, but Kayla Alexander put all the credit on Puerto Rico’s game plan for the loss.

“As a player you look forward to that crowd, it’s that energy,” said Alexander who had 11 points and eight rebounds.

“It’s nice to finally have people back in the stands whether they’re cheering for you or against you…I feel like we let a lot of points go at the foul line, and I have to give credit to Puerto Rico, they played great today.”

Nirra Fields led the way for Canada offensively and provided a spark on defence with 14 points, two blocks and a steal. Canada’s young talent also continued to make a case for a spot on the Olympic roster as Amihere scored 12 points and grabbed 11 rebounds and Shaina Pellington chipped in another eight points.

For a Canadian team that’s got their eyes on the podium at the Tokyo Olympics next month, Thomaidis says this loss provides Canada with some important points to work on going forward.

“Anytime we get a chance to play in a close game against a team that’s going to be at the Olympics, it’s a tremendous gift to us,” said Thomaidis. “As disappointing as it is, in the long run it’s going to be a very good thing for us.”