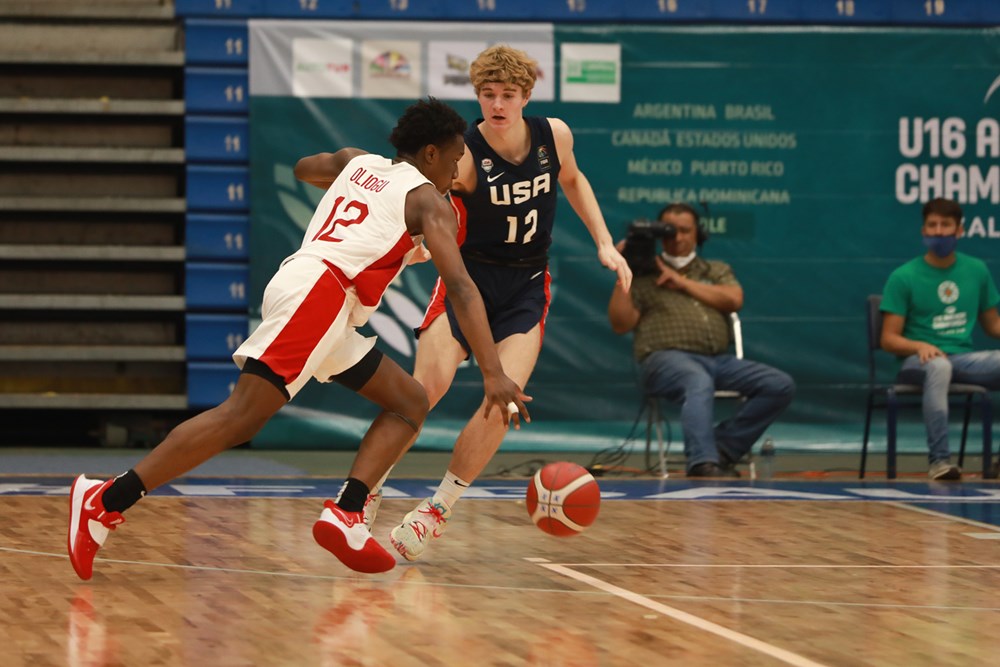 By Shaun McLeodAugust 29, 2021No Comments

Canada is headed to the bronze medal game at the FIBA U16 Americas Championship for the first time since 2013 after a 99-81 loss to the United States of America.

The U.S.A. Took control early with active hands on defence leading to five steals in the first quarter and holding Canada to just one made three in the opening quarter. 28-17 after one quarter.

Canada’s offence struggled with the pressure from the USA and Ishan Sharma was the only Canadian to find their footing early with six points in the opening quarter.

Canada came to life in the second quarter behind two of the tournament’s stand out performances Olivier Rioux who had 12 points and 12 rebounds and Mikkel Tyne had 13 points, seven rebounds and four assists to tie the game up 47-47 going into halftime but in the third quarter, Canada fell flat while the American defence forced 20 steals and found easy buckets for Kylan Boswell who had a game-high 20 points, Jeremy Fears Jr. who had 18 points, and Ronald Holland who had 16 points, 16 steals, four steals and a block.

Efeosa Oliogu led all scorers for the Canadians once again with 17 points, Ishan Sharma had 12 points and Jacob Theodosiou had 11, while Char Yeiy chipped in nine points, eight rebounds and a steal.

With this loss, Canada has broken its three tournament long streak of finishing second in the FIBA U16 Americas Championship will now move onto the bronze medal game on Sunday where they will face the Dominican Republic who lost a close 76-74 matchup to Argentina. With a win in the bronze medal game, Canada will have finished on the podium at every FIBA U16 Americas Championship since 2009 and the Dominican Republic’s only two losses this tournament has come to teams in the gold medal game, much like Canada.

The game will be available streamed live on FIBA’s YouTube channel on Sunday.