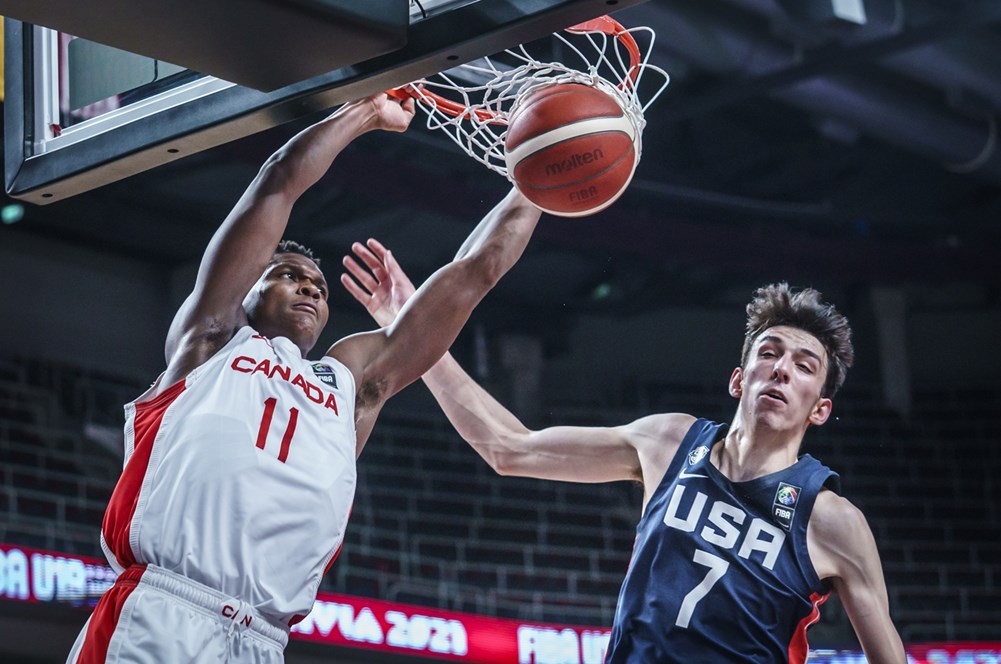 Home » On Point Blog » Canada falls short to the USA 92-86 in FIBA U19 World Cup, play Serbia for Bronze

With another hard-fought battle of North America in the books, Canada is heading to the bronze medal game on Sunday after losing 92-86 to the USA in the semi-finals.

The USA played a complete team game early with eleven players getting in on the scoring. Kenneth Lofton Jr drew the matchup on Canada’s dominant big man Zach Edey early, and with help coming from seven-footers Chet Holmgren and Ryan Kalkbrenner they were able to keep Edey out of the scoring column in the first half. The U.S. also played physical down low, disrupting shots on the drive and forcing Canada to miss several easy putback buckets.

“We felt they were the only team that could challenge us really,” said Edey. “We’re coming tomorrow with that mindset: just to dominate and make sure that we get our country’s second medal in this event.”

The Montverde Academy duo of Caleb Houstan and Ryan Nembhard continued their run as the engine of Canada’s offence with Edey being taken out of the game early, but Canada struggled as a team to find consistent offence and ways to play together as a team. Houtstan had 23 points and three assists and Nembhard 18 points, eight rebounds and six assists.

After the half, USA switched to covering Edey with just a single defender and Edey began to take over scoring the bulk of his 16 points and 16 rebounds in the third quarter until Charles Bediako and Olivier-Maxence Prosper’s energetic defence brought Canada back to within one point of the Americans. The Canadians quickly fell back into old habits and the U.S. had an answer for every one of Canada’s runs down the stretch.

The Canadians’ forced shots early in the shot clock, and Bediako’s one point was the only point scored from the Canadian bench while USA’s bench poured in 39 points.

“They just made shots,” Edey said. “We got lackadaisical. We gave up some open shots.”

USA blew the game open in the fourth quarter behind Lofton Jr.’s team-high of 16 points and seven rebounds and Michael Miles’ 15 points, five assists and four rebounds. Holmgren also added 12 points and eight rebounds. Lofton Jr’s ability to make tough shots in the paint and find his way to the line and Miles’ athletic transition plays were too much for Canada to overcome.

Canada will now play Serbia and their top ten projected draft pick Nikola Jovic in the bronze medal game on Sunday. Jovic was the second highest scorer in the tournament at 18.8 points per game and has shown dynamic ability to handle the ball and score inside out throughout the World Cup.

CAN vs. USA BOXSCORE

The Future of Canadian Basketball in the Paint: Part 1